This morning was bitterly cold and windy, there was ice on the pond and in the water buckets. Still the sky was showing signs of turning bright blue and there was sunshine to be had, so I loaded up Desire and headed to the lake to meet up with N. We got there a little before her and there were lot’s of trucks and trailers in the parking lot already. Lately Friday at the lake has been nearly as busy on the weekends!

While I was tacking up a lady led her horse over and was asking me how I thought her fit looked on her new Easyboot Gloves. She said she had had someone fit them for her but the fit looked god awful to me. I’m the first to tell you that I’m no boot expert, but I’ve been using them since last fall and I’ve become mighty obsessed with them in that time. The fit, the sit, the rubs, the boot losses and recoveries. Anyway in this mare’s case, she looked to have a high heel and more upright shape to the hoof. It was obvious that the hooves weren’t going down into the toe of the boots at all. I pointed it out to her and mentioned Power Straps and Easyboot Epics (what my high-heeled Blaze goes in now) and she thanked me and went on her way. N saw her later and apparently the boots stayed on, at least for a mosey around the horse camp loop.
Miss D and I headed out along Saddle Dam for a warm up mile while N tacked up. A big group of 6 or 8 riders (including the boot lady) were heading out for the horse camp loop as I was coming back in to rejoin N, but Desire jogged on by without any concern. We joined up with N and headed off for the Visitor Center/ridge trail as usual. At the first water trough not far out from the trailers, N’s mare stopped and rubbed her head on the trough but didn’t drink, so we continued, walking down a little hill and then starting back up a short steep incline. I started to trot up the incline as we usually do but heard N saying “Stop!” I turned and didn’t see anything but N said Willow had reared. Things seemed to be okay so we started to walk on but I heard N cry out again and turned to see Willow rearing and twisting to the right. She kept turning and turning to the right and half rearing, finally N bailed but then Willow kept turning and knocked her whole body in N a couple of times as she tried to catch her. It all happened so quickly and was so hard to tell at first what was wrong. Willow finally stopped and N immediately saw that one of her rein stoppers was gone and the martingale ring had slip up and become stuck on the rein clip, thereby effectively cranking Willow’s head to the right and keeping her turning in frantic circles to try to relieve the pressure. It wasn’t the mare’s fault, but resulted in a serious crack to N’s head plus being body swiped by her horse 3 or 4 times. It could have been worse but it wasn’t great! N thought her nose might be broken but it wasn’t bleeding and she decided to lead Willow on foot for a minute and see how she felt. We got almost to the foot of the long hill up to the Visitor’s Center and then N told me to go on ahead and ride and she would hang out with Willow, maybe ride a little, but wasn’t feeling she would be able to continue at speed. I felt really bad and offered to ride with her back to the trailer but she insisted she was okay. There were lots of people out on the trails today which made me feel a little better that she would find help if she needed it, but I was still a little worried about her for the remainder of the ride.
I headed on up the hill alone. My lady parts were reminding me what time of the months it was and were seriously questioning my decision to be out trotting around on a horse, let alone for miles. But with N’s determination not to waste her trip to the trail fresh in my mind, I told my lady parts to shut up and eat saddle. 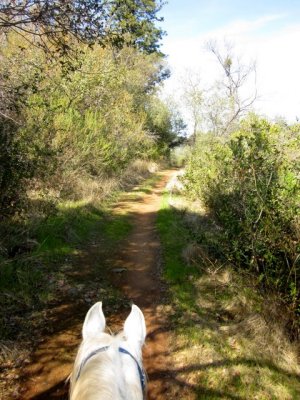 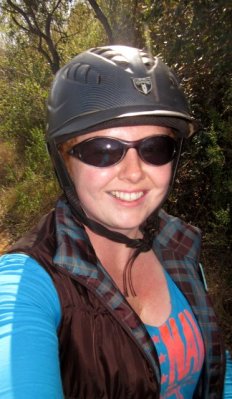 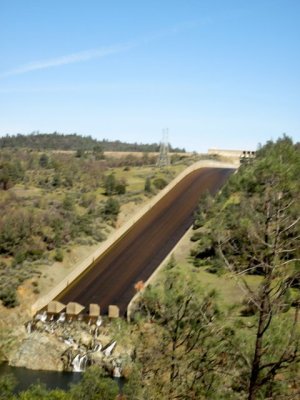 Oroville Dam spillway
We ended up going 16 miles in 3 hours, including a sweet gallop up the steep galloping hill C showed me a couple weeks back. All of the boots stayed on for that this time, thankfully. Desire moved out well, on the way out she was moving steadily about 7.5 mph but on the way back of course it was most like 9. Still she was willing to be out alone and trotting down  the trail nicely. She did a couple of really sharp, really ridiculous sideways surges while moving at a good clip which is always SO FUN to sit. I am top heavy in the chestibules and tend to ride (and live) with tension in my shoulders, so I really try to focus on balance and relaxation when I ride, but it’s darn hard to work on that stuff when you are constantly just working to stay *on top* of your horse who floats like a butterfly left and right as the logs and scary rocks flash by. 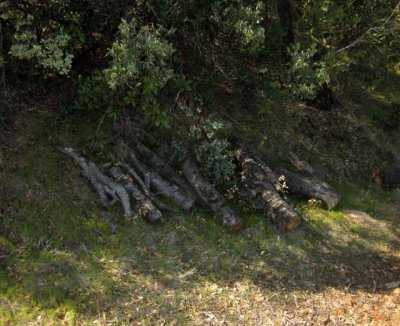 Love the trails along the water 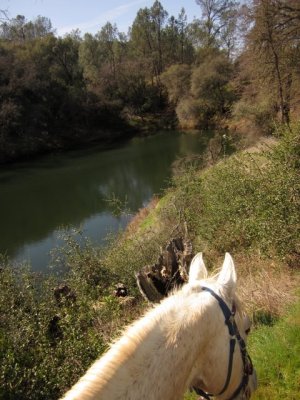 Ninja photography from her back 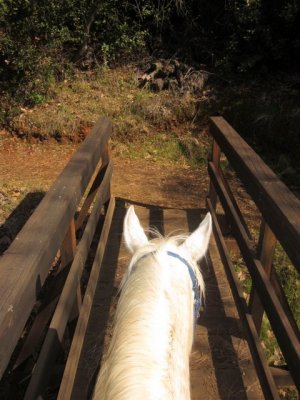 We galloped from the bottom of the hill pictured below, way down where the pipe disappears, to the top. Desire was seriously huffing and puffing, but she did it. It was fuunnnn! 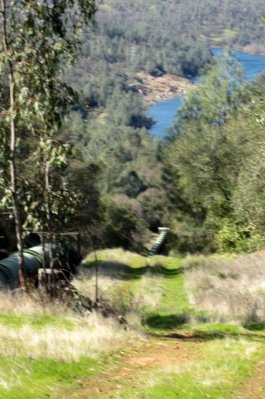 I saw Willow at the trailer as Desire and I walked down the hill to the trailers. N was over chatting with some other horse friends but came over and said she had taken some ibuprofen and was feeling okay, but her left eye was already starting to darken from the impact to her face. Maann I have been whacked in the face by a horse head and it hurts so damn bad! I feel for her. Like she said though, it could have been worse. We’re not sure if her rein stop broke/came off when Willow rubbed her head on the water trough right before before it happened, but boy does that just show you how important those rein stops are!! Things could have really gotten out of hand and I’m so glad they didn’t. Still N will be feeling it for a few days, no doubt, and Willow got a good scare. It certainly made me sit up and take notice–let’s all check our tack and make sure small but essential things are present and accounted for!
Good ride. Got lot’s of sun. Really hungry!

3 thoughts on “A Lesson Learned”