Well a couple horsey things to catch up on and some photos to share. Sunday we met C at the lake again for a ride, this time at the far trail head down by town. I prefer that area and that end of the lake trails but as I’ve mentioned before the parking lot is very secluded and I don’t like to go there alone. We met at 9 and had a nice 3 1/2 hr ride, including a part of the trail I hadn’t been on since the endurance ride (because it was bike trail and C didn’t believe me until we rode it and saw the signs, haha) so it partially made a loop instead of just riding straight out and back the same way. I got up at 4 am that morning to drive my husband down to the river to meet his friend to fish since we are currently sharing one vehicle, so by the time we were in the saddle and on the trail I was already a little tired. We did Sycamore hill and the horses got a good work out, though we walked a little more than usual since Blaze and I were both dragging a bit. C’s horse continues to be a pain about loading back into the trailer to go home (he is off the track and has a few issues) but hopefully that will be resolved soon. She is a lot more patient than I am, I have had SO many horses not want to load in my little straight load that I am a little short on patience with the issue, though generally patience is the key!
The weather has continued to cool through the week and the last two days were wonderfully cool, topping out at 85 at the most. The mornings have been deliciously cool and there was even some dew this morning. It really helps my general mood to get going in the morning in the cool instead of being sweating and irritated at 7 am. Today’s high was forecast to be 80 so I decided to ride Blaze out from here and check out the Bangor Wildlife Area that is a couple of miles away. We left the drive at 9:30 and headed down a 2 mile dirt road, across the main road, and down another mile of paved road to the wildlife area. We only saw a couple of cars and only one sped by without slowing. That irritates me SO badly when people do that, luckily Blaze will walk calmly ahead while cars pass but if I were on another horse and that car flew by like that–danger! I know its technically a road and not a trail but its really not that hard to slow down for the few seconds they pass us. Oh well, people are so naive and/or rude about horse etiquette its pretty much par for the course. We almost had to turn around right when we arrived at the wildlife area as there was a cattle guard across the trail. I dismounted to look for a way around and Blaze made to bravely stride across it before I could stop him, sticking half of his hoof between the bars of the guard! I about had a heart attack and backed him away from it. I was thisclose to turning around and giving up but there was a space between the bars bracing the guard where I could see Blaze could step and avoid the guard and I have squeezed him through tight spaces before, so I decided to risk it. I stood on the edge of the cattle guard with one hand on the reins and the other on his side, sort of blocking him so that the only way forward was to step over the support bars and avoid the guard. He minced his way carefully over with no issue at all, phew! I swear horses know when they need to be careful about things because Blaze is fairly clumsy in general but the few times I have needed him to walk just-so in tight spaces he has managed it perfectly. I noticed when I went to get back on that both my legs from the knee down were covered in those horrible tiny stickers, I mean covered! Blaze had them in his splint boots too (reminds me I have to go scrape them out still, uughh hate those things!) and I don’t have a clue when we got them but boy they got me good. They scrape off fairly well if you hold the cloth tight and use a shedding comb but are really irritating. Only another few hundred feet and we almost got stymied again. There was a big gate to enter the wildlife area and two smaller gates, and in general we could have gotten through the smaller gates fine (the bigger one was locked) but they had put a pole in the middle of the gate entrance to prevent four wheelers so we had half a gate width to squeeze through! Luckily little Blaze squirted through there and we were finally into the wildlife area.

There are herds of cows out there, though none were to be seen today, and I am assuming the tire track roads I followed around exploring were from trucks driving out to feed them. Unfortunately it wasn’t as big an area as the husband and I had expected, since it only went about 3/4 of a mile in each direction before you hit either a fence line or impassable rocks. It was still fun though as there were 5 different dirt tracks leading in all directions that I trotted out and back exploring and then one long steep hill I cantered up. It is fairly limited and takes a while walking on pavement to get there so I don’t think I will ride there very often but it is nice to have a different spot to ride to from home, and it made a 13 mile ride which is pretty significant for not having to trailer anywhere.

The husband had said if I wasn’t back in 3 hours he would start worrying and I made it back in the driveway (actually I snuck in the bottom pasture gate to try to surprise my husband but the mini somehow knew I was coming and started whinnying and outed me!) in exactly 3 hours. It was nice to be able to ride out in the day and not be sweating bullets. I certainly got warm but nothing like riding in 90+ degrees. We cooked up our first crook-neck squash and a big lettucey salad fresh from the garden for lunch which was yummy but I am such a carnivore, I thought it would be just perfect with a big chunk of chicken on top!
Desire’s fly bites are looking better, the War Paint is keeping the flies off and the swelling is completely gone and things are improving. I decided to wash her this afternoon because she doesn’t seem to roll but once in a blue moon and she gets a bit grungy. Filly was fairly cooperative for haltering and they both snorted and rolled their eyes when they saw the hose moving and spraying but got over it pretty quickly. They both seem to react like DRAMA FIRST for a few seconds and then oh, okay, no big deal. Blaze is slower to react and is more inquisitive in general than spazz first and ask questions later. Desire got her bath and re-application of War Paint and then Sheza had a grooming, practiced lifting her feet, and, drum roll please, wore her first fly mask! It took some convincing to get it on her but I just went slowly, rubbing the mask on her, putting it up by her ears, then I just hung it on one of her ears and let her get used to that. She didn’t react at all when I pulled it over her face and put her other ear through and stood and wore it nicely while tied for 15 minutes or so. 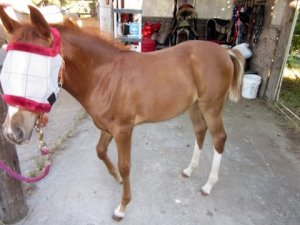 Un-doing the velcro to take it off scared her some and I practiced that a few times and put it on and off a few more times then put the girls away and fed everybody. Oh, Sheza is outgrowing her leather baby halter! I had to let the nose band way out and she only has one hole left on the crown piece. Seems like just yesterday I was poking more holes to make it small enough to fit her!
I may be going to the coast this weekend for a family get-together and to see my brother’s baby for the first time, so I may not post for a bit, but I haven’t decided yet since we are down to one high mileage vehicle and I’m not sure I want to risk a road trip. Ohh boy I hope some day we can go a few years without any vehicle breakdowns! Wouldn’t that be something.
Happy trails!