I managed to get up before the visiting family this morning so had to jot a quick entry here acknowledging Sheza as a very clever and obedient girl yesterday. The farrier came out to trim Desire and take a look at her thrush and since he is usually early and catches me unprepared I decided to be on top of the game and catch everyone ahead of time. Sheza haltered nicely and we headed for the dreaded mats. She had a somewhat bratty gleam in her eye but I kept turning her head a little side to side to keep her feet moving so she didn’t lock up and go into mule mode which seemed to help. It only took two minutes tops for her to sniff at the mats and then decide the black holes aka mats were indeed safe to walk on without a fight. I was very proud of her and had her walk on and off them a few more times just for good measure. Desire was tap dancing around in her cross ties impatiently but since I pulled them about 40 minutes ahead of time they both had ample time to practice patience and relax at their respective tying spots.

When the farrier arrived he went right to work on Desire and after working on her hooves for a few minutes told me the thrush was well under control and to just keep doing what I’m doing (cleaning, spraying with Vetericyn, though now I also have the Hypozin I ordered from Utah). He also pointed out that Desire’s hooves are in the process of adapting to this different, harder ground. That was a total light bulb moment for me; I have never brought a horse home from farther away than about 150 miles, and even then the ground was quite similar, so it didn’t even occur to me to remember that Desire came from the deep red sands of Utah and is now on the hard-packed rock-growing ground of California. I had her trimmed 4 weeks ago and since then she had grown these sort of “pads” of hoof material over her soles which I had never seen before. My farrier pointed out that these were essentially calluses, since her hooves were used to softer ground they were adapting and growing more hoof out on the sole to protect themselves, which in turn was sort of “sealing over” whatever manure/junk might be in her hoof. Add heat and you had just enough moisture and compacted material in the hoof to start up some thrush. He trimmed and cleaned up her hooves nicely and I trotted her out for him because she had still been ever so slightly off at the trot. She trotted out well except for one odd step (which could have been coz my flat trot out space was full of awful prickly thistles that were whacking our legs) and the farrier agreed with my thought that the rock that embedded itself in her foot that I had to really pry out could have easily made her tender for a week or so. So, the thrush is getting under control and she trotted out sound, all good things! Now I can (hopefully) really start riding her consistently and ponying Sheza out through the neighborhood! Can’t wait 🙂 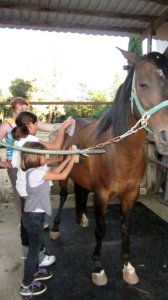 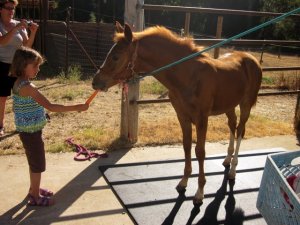 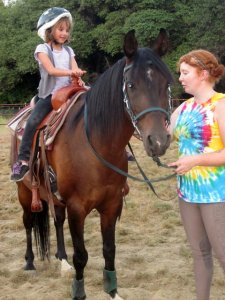 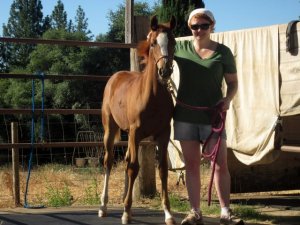