As I often reiterate, Sheza is my first foal. I’ve never been through the birthing/foal raising process before, and so much of it has been surprising (read: alarming?) so far in the just-shy-of-a-year since Desire arrived here from Utah, 8 months pregnant. Fortunately we had the luxury of an easy pregnancy for Desire, a quick, seamless birth that we assisted at and filmed, and the resulting beefy beauty that is Sheza. She turned 8 months old this week and it led me to look back on her Baby Book and all of the “Firsts” we have already gone through in our brief time together.

This morning we had another first. I had to opt out of my planned ride today as we had a potential buyer for the snow plow that The Bomber (the new-old diesel) came with. A guy from a pump company was willing to drive up from Stockton to take a look at it and the plow attachment was still on The Bomber as of this morning. I also had rather a lot to drink last night at my friend’s birthday party and while I could have done it, trotting around on a horse today may not have been my favorite choice ever. Anyhoo I managed to call my riding partner early enough not to inconvenience her (I think!), we sold the plow, and I had another little First with Sheza.

I had blanketed the horses Wednesday for the overnight rain and yesterday was bitterly cold so I left them blanketed for the day. This morning was much warmer and blue skies, though blustery, and I pulled blankets. I always just pop into the adult horse’s pastures and pull their jackets with them loose in the field. Up to today I had to halter and lead Sheza out to the cross ties to remove her blanket, as she was pretty skittish about the blanket being dragged off of her. Today she trotted right up to me when I came in the gate and ran her whiskers busily but calmly all over me while I undid the buckles. Then I slid the blanket off her while scratching her favorite spot and she just stood and let it happen. YES! A small victory, but every little moment of progress with this BlazunHAAT filly is a triumph to be noted. I am really hoping she goes through a more mellow phase soon as she has been hot and spook spooky spooky for the last two months. But in the meantime at least we are still making small steps forward.

I have a new plan for Blaze’s hooves. Having now gone through two sets of steel shoes without riding him, I’m not seeing the point of keeping him shod. He needs to go in front hoof protection of some kind, but his hind hooves are rock hard and do fantastically barefoot. Granted, he had such a long time off since August because of my saddle issues and he will be used more in the future, but realistically I’ll be focusing on Desire and we are going into winter. I’m not happy with my shoer lately, either. He had truck troubles a few months ago and since has stopped hot shoeing, part of the transportation issue I guess. Anyway, I’m not seeing a need to keep now-cold shoeing Blaze in steel shoes going into winter when I won’t be riding him much and when I do it will mostly likely be on soft footing (over winter, and into next year I plan on gymkhanas and team sorting with him). So the plan is, pull his front shoes, fit him up with a pair of Easyboot Gloves for his fronts, and he can work on transitioning to nice barefoot hooves over the winter. He has quite nice, large hooves anyway, but has always been sensitive on the fronts so I kept him shod. I’m wondering now if that is another concavity issue/keeping him in steel shoes, and if my trimmer and I can’t get him successfully barefoot.

Phew, I had fun last night but I’m still feeling it. Tomorrow I get to go do the small amount of Christmas shopping I will be doing this year, and The Bomber and I will take our true maiden voyage together. If you see me, wave, I’ll be hard to miss: The Redheaded Endurance gal in the bright orange truck! 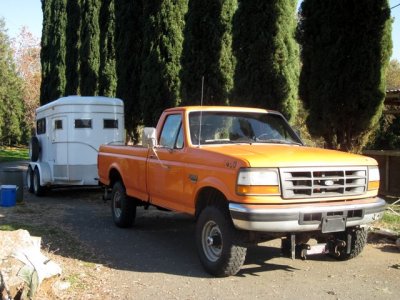