Or..If you forget your saddle pad and end up riding using a random blanket from the truck as a saddle pad….you might be a redneck…?

My husband had a great spontaneous idea for us to throw a horse in the trailer, his fishing rods in the Bomber, and head down to the lake together. I decided Blaze was overdue for some trail time and loaded him up. Bless his heart, I must mention that after 6 months without being in the trailer (time off after last season’s saddle fit issues, been riding him from home) he hopped right into the trailer without hesitation. He was sweaty and had nervous cow pie poops in the trailer, like he used to when I first got him, but I know he’ll chill out with a few more times out.

We parked near the diversion pool where J fishes, at a spot conveniently large enough to turn around, with direct access to my usual lake trails. I hopped out all excited, opened my trailer tack door and immediately saw  that my saddle pad was missing. That would be because I am so over the top on color coordinating that I pulled Desire’s blue saddle pad out so I could put his green pad in. Except I never put the pad in. So there I was on a perfect gorgeous afternoon at the lake with no saddle pad. Well I briefly considered trying the saddle without any sort of pad but couldn’t make myself do it. Then J spotted the very navajo-esque blanket I keep in the truck for my chihuahua, Georgia, to sleep under when she’s cold (and if it’s under 70 degrees, she is cold). I was dubious but I REALLY didn’t want miss an awesome chance to ride Blaze and with his winter coat and the sultry weather I knew riding bareback wouldn’t be fun for long. So I folded that random blanket in half, then took another fold in the front to sort of lock it in and make it the right length on his very short back, and strapped the saddle on that puppy.

My husband took a few cool pics of us. In the top one the big “hill” behind us is Oroville Dam. Below that I rode down the road a little ways with J to where he heads off to fish and Blaze was snorty snort snort at everything and standing on his Arab tippy toes, not wanting to go forward. There is a mountain lion in that area (that’s the spot our lab, Tady, ran off up a hill and came back with claw marks down his chest and shoulder) and we wondered if he smelled something because he was NOT pleased and it’s not like Blaze to make a big fuss over nothing. Still, cool photos: 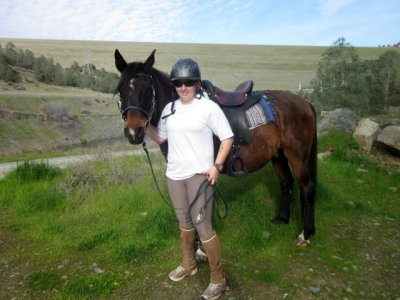 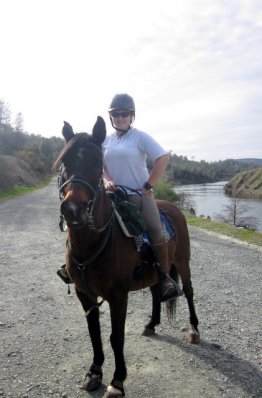 We hit the trail around 3:30 pm, and ended up riding down to the Lakeland tunnel and back, some along the water and some winding on the trails above the water-side trail. It was about 7 miles in a leisurely hour and a half, I didn’t ask a lot of Blaze, just some nice trots along the flats, and I was paranoid as all get out the whole ride that my ghetto saddle pad was going to ruin him, or even just rub, either way, oohhhh nooo what was I doing to my horse?! 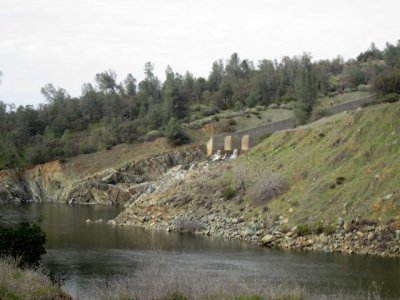 Oroville Dam Spillway
The pollen was HORRENDOUS today, it was so thick you could see, smell, and taste it. I took some Claritin before I went to the lake but I still felt the pressure/sinus headache throughout the ride. I’ve never had such severe sinus headache reactions to pollen as I have this year, just in the last couple of weeks! And never had any sort of allergies at all until I moved to the Oroville area. I guess that stuff sometimes catches up to you later in life. It’s annoying, but it’s real, the last few lake rides I’ve done I’ve had terrible sinus pressure later in the day, so I need to be preemptive about it from now on I think.

That blooming white tree is my pollen nemesis 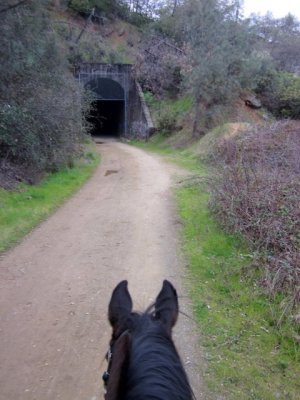 We wandered back to the trailer around 5 and I held my breath as I untacked the Blazer–and discovered almost perfectly even sweat marks! There was a bit of ruffed hair at the shoulder areas but that seemed to be more saddle fit than anything else, and I had changed my shimming for today as I didn’t think I had adequately thick shims at the hollows behind his shark withers. Yeah, he is a special shaped horse. But anyhoo my cheesy saddle pad improvisation worked a charm!

Blaze was dogging it on the last mile or so to the trailer but I’m pretty sure that was more the warm weather and semi-confusion at being on the trail again than being truly tired. Who knows. I had almost forgotten how incredibly painfully slowly he walks, I can literally walk twice as fast on foot and it makes it hard to appreciate the ride sometimes. I’m sooo impatient! Sometimes it feels like we’re going to go backwards he walks so slowly!! Desire’s brisk walk and smooth gaits have really spoiled me, but Blaze is the dearest soul in the world and I’m glad I got to spend a gorgeous evening on the trails with him.

My husband made an amazing dinner and when I went snooping in the freezer I discovered he had bought Ben & Jerry’s Coffee Heath Bar Crunch too! Ohhh heaven, after spin class this morning and an evening ride, I’m digging in!