Today was just about perfect! Things have been on and off stressful/busy since I got back from Cuyama and unfortunately I haven’t been able to hook up with my usual riding buddies C and N, but after things calmed down this morning and the sun had warmed away the frost I found the perfect few hours to take Desire out for a neighborhood ride.
I hadn’t ridden her since Cuyama what with one thing and another, but she has been looking GREAT out cruising around her big pasture up and down the hill, and a couple of days a week when I turned them out in onto the big barn lawn she led multiple heady herd charges around the lawn, back into the pasture and down the hill, back up and around out to the lawn and repeat. She and Sheza looked beautiful and mini Bandito looked hilarious, flying after the mighty Arabs with his stubby little legs. He does have a little turn of speed though and throws bucks and squeals in the gallops like he’s the toughest cookie around. The girls seem to accept him mostly though Desire likes to give him snarly faces once in a while. He holds his own.
I had to fend off Sheza when catching Desire which, while not the best manners, is SO preferable to her other personality, the Catch-Me-Touch-Me-Not-Never-Nada attitude. I turned miss D out in the arena as usual to get the kinks out and then had a little photo shoot while she tore around: 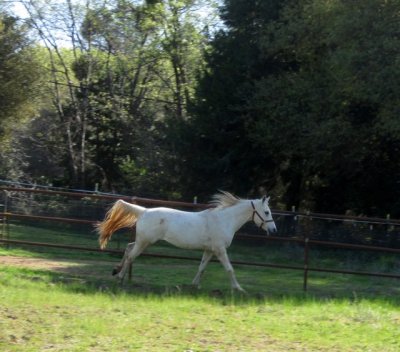 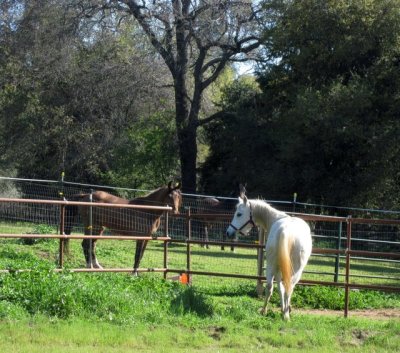 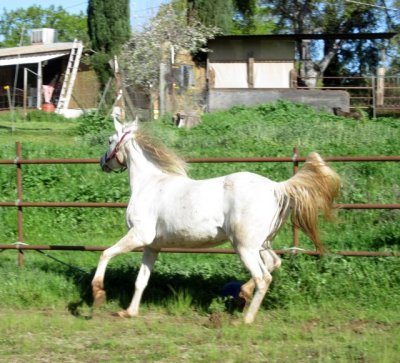 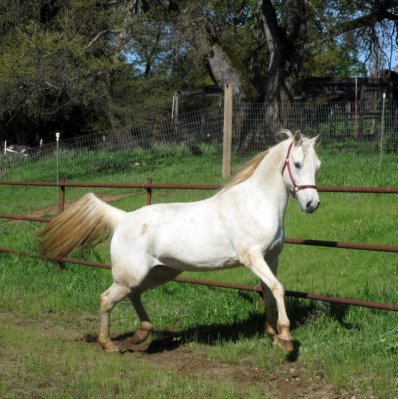 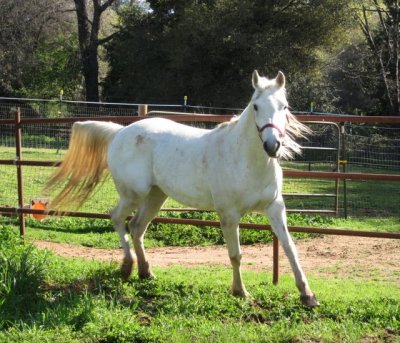 Onto the lunge line, remembering our manners and cues, and boy has she gotten GREAT, attentive, responsive since we started last fall. 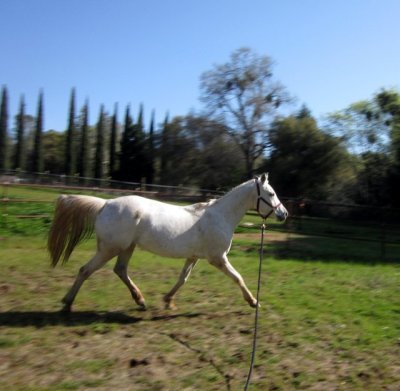 The photo below looks ordinary BUT it’s just simply not. Desire spends 98% of her time on the black mats in the cross ties tap dancing, stretching, leaning, just generally expressing her impatience and displeasure. Some combination of being ready to get going and hating black mats, as per her previous owners. So this photo, showing my wild endurance mare *snoozing* on the black mats, is simply priceless. She was so mellow that I got totally sidetracked and took a good 45 minutes to tack up while she just kicked it in the cross ties. A-M-A-Z-I-N-G!

I felt the needs for braids today. Awww ain’t she precious.. 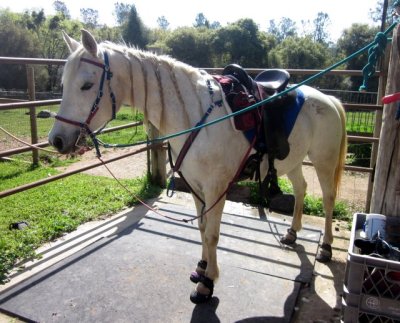 This is the kind of day it was. How can you not just be stoked on life with this kind of scenery, the sun on your back, riding a good horse..

I didn’t quite manage to capture it in the photo but the flowers pictured below were this intense, vivid, almost *glowing* ruddy pink color, it was really something.

The creek was up quite a bit from last ride over! Good news. 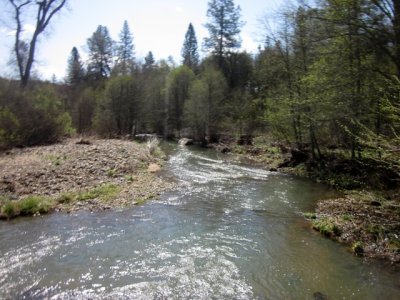 I rode down to and then skirted the Bangor Wildlife Area, and continued on the dirt road as I had when I rode over to my friend’s to feed his chickens a while back. I hadn’t gone to the end of the dirt road before so I cruised about another mile past our friend’s house and turned around for home right at 6 miles out. We were just cruising, we trotted maybe 3 times the whole ride. Today was just about having a nice relaxing ride, as Desire so clearly has the conditioning and speed under her belt what she needs now is calmer work, more on fixing her race brain than priming her race body.

Okay, so I gotta say, she was SO responsive and light on the bit today, Bahahha! I can’t help but laugh because last time I rode her she was pulling my arms out of my sockets for 105 miles and slapping her feet down in a bouncier-than-usual pissed off trot. Today was light as a feather to the bit and the smoothest 6 mph jog when I asked, it was more effort to post than sit. Really something.

We had an exciting moment on the way back. We were trotting up a pretty steep short hill on the dirt road but were well over on the grassy shoulder, out of the road, and a car came around a blind turn. They were going slow and were well on their own side but Desire decided to slam on the brakes and start to surge right away from the car. My automatic bad-horse noise flew from my lips, a loud harsh “EH EH,” and it was enough to stop her surge so I could right myself and not hit the dirt. I was well over her left shoulder and clinging on her neck with my right arm and back with my right leg, so that instant she stopped at my correction was just enough for me to pull back into my seat and continue riding like nothing happened while the girls driving by gaped out the window at the almost-tumble. The balk was pretty unnecessary but she did listen and snap out of it and I didn’t come off, so I’ll call it a win-win. She was really good about listening to the EH EH today, whenever she started to get crazy eyes at a rock or stump I would voice it and she would straighten out and continue forward. Ooo so responsive, me so likey!

I didn’t see a very big patch on the ride but I just love California Poppies, the contrast against the new green grass is just something. So here’s a couple: 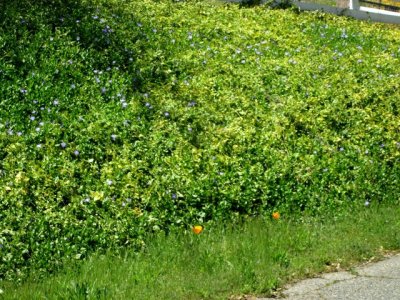 Okay so I was on a flower kick. Again, photo didn’t quite get it but, the bush below was on FIRE with orange blossoms. 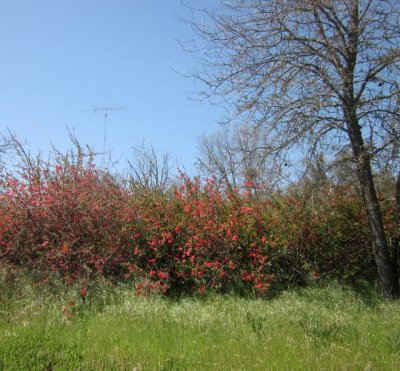 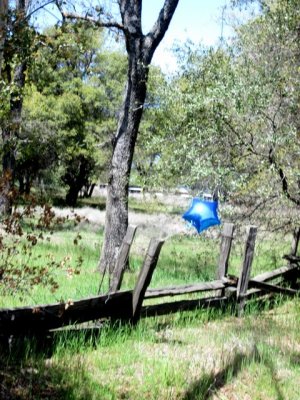 We woke Joey up from a nap as we strolled up the driveway!

mom has a good roll:

Not so small at her side anymore! 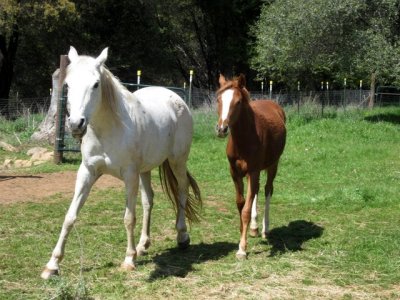 Sheza is about Blaze’s size now, but not quite as big as mom–yet! 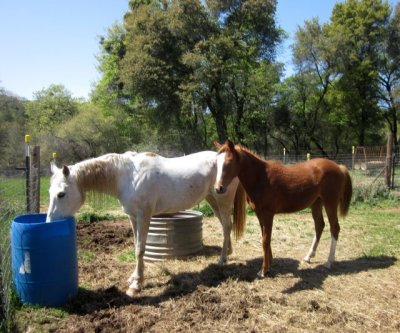 Stopped by the cozy stall to say hi to our buckling, now named Hector, but formally Count Hector Goatula. My best friend from high school came up with Count Goatula on Facebook and I am still laughing about it. 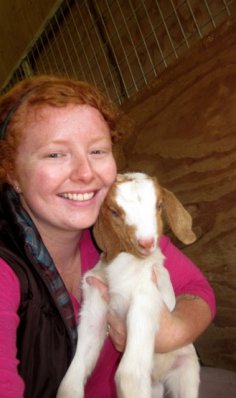 The Bay Boys! Aww those two just warm my heart, they are toooo funny but so kind and gentle. A great antidote to pushy mares. 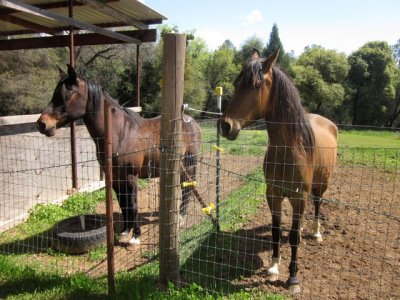 7 thoughts on “A Photo-worthy Day”