Keeps the doctor away! Or might put you at the doctor’s, I suppose. But today went just swimmingly, as my mom would say. Worked on lunging and other things with the greenies and took a bareback cruise on Blaze in the afternoon as my reward. I left my mohair girth in A’s trailer after Cuyama so I won’t be riding Desire until we get to the Whiskeytown ride this coming weekend, any other sort of girth I have give her rubs without fail. Not like she needs the work anyway! It was an awesome feeling to work with all the ones that needed it today and have one fit and ready to go in the pasture. 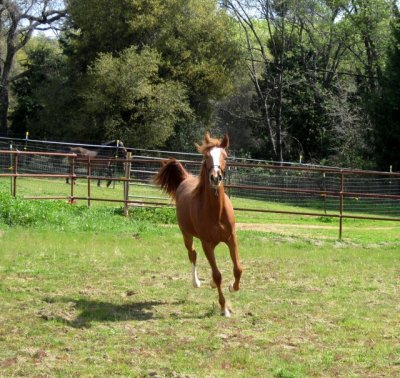 Sheza was a Sheza Good Girl today! I really was impressed with her. This was my first time catching her since she rejoined her mom and I wasn’t at all sure how she was going to be. So far she had been very friendly and in my face at feeding time, since Desire always is. Happily this morning they all crowded around me (even the shy mini! The piglet girls must be motivating him) and Sheza bowed her head into her halter and let me tie it without even a head toss! Shocking. I figured she would be fresh and cantankerous as usual and I didn’t relish my arms getting yanked trying to lunge her so fresh, so I turned her loose in the arena thinking she would burn off some steam. Again she surprised me by trotting and cantering around a couple times (as I clicked photos furiously as you’ll see) and then coming right back to me.

Mom wants more photos, have another go around the arena! 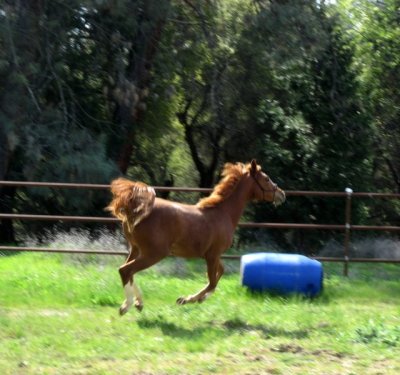 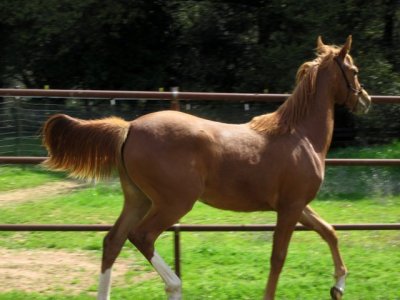 I sent her off a few more times and she went trotting over for a bite of grass and then ended up coming back to me pretty quickly. I took that as a signal she was ready to work, so on the lunge line she went. She circled right out with a point and pressure from behind, I was so stoked! She had a few flippy head BLARGH moments where I had to do some quick footwork to open my shoulder and get behind her to keep the circle going, but for the most part any time she started flinging her head which always came before a balk, I gave her the “EH EH” and she continued forward. It was like, I dunno, someone had spent actual time, like, training her since she was born! Holy cow!
She stopped and faced me well on cue but pawed twice after she stopped, so got sent right around again til she faced me nicely without ‘tude. I picked up all her feet just coz, she is always pretty good about that but it’s stuck in my head from Joey and I figured it’s always good practice. She didn’t spazz through any of the 6 goes through the gates today, which was refreshing! I swear, there really might be a brain in that pretty red head. Oh BOY if she turns out anything like Desire I will be in heaven.

Sheza Good Girl, all sweaty and docile after some lunging: 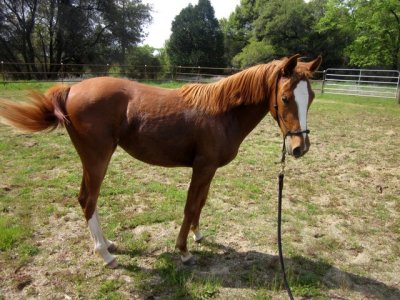 Her mane grows in so nice and straight!

I sprayed off her front legs and chest and she didn’t seem to mind very much. The benefits of getting them hot and sweaty and tired first!

I ninja’d her with the de-wormer, rubbing it all over her face and muzzle and nostrils until she kind of liked it and then slipping it in and depressing the plunger like lightning so she didn’t have time to spazz. I pride myself on my de-wormer ninja skills, it almost always works. She wasn’t very bothered by it and just chomped at the wormer like, “Hmm, tastes like shit, hmm..”

She was pretty polite on the walk back to her pasture and she bravely went under the Scary Branches of Doom that are just low enough to brush the top of her ears–she balks at them every time without fail. Good girl for removing the halter, no trying to rub on me like she sometimes does. She really was a satisfactory filly today!

She is 14 hands and 600-something pounds, and will be one year old next Saturday, the day of Whiskeytown Chaser! Time has FLOWN.

Then it was the bay boys’ turn.

I had been thinking about ponying Joey off the property from Blaze today but we ended up working on lunging for a good 45 minutes instead. Joey was quite a satisfactory boy today, and again impressed me with his stamina. He remembered the whole lunging thing right away and has a really snappy stop on him and would back up at the rope wiggle. He can REALLY trot! 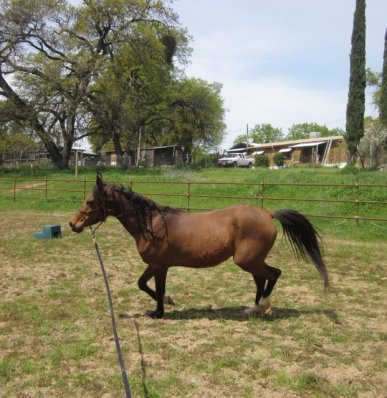 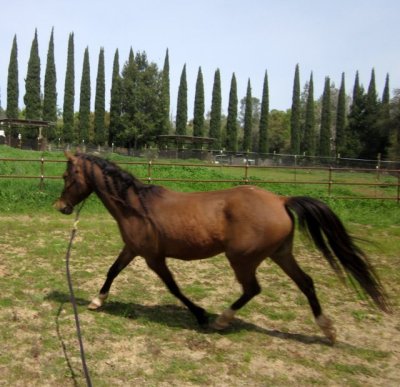 I took a little video of him lunging at the trot to show my husband. See, the other day my husband made the mistake of saying, “I don’t think Joey will ever be an endurance horse.” I’m a pigheaded redhead, and I took that as a bit of challenge..so we’ll see where it goes. I’m not saying he’ll be the best thing ever or claiming any great future, but he does have potential and seems quite naturally athletic with a good mind. Time will tell!

After he had trotted and cantered, listened to my verbal cues pretty well for transitions, switched directions a bunch, and let me pick up both his front feet and run the lunge whip over his rump and all down and inside his hind legs, we called it a day for arena work.

He is starting to look good! 🙂

He was very sweaty so I decided to give him whatever sort of shower he would tolerate, too. To my surprise he seemed very curious about the light spray of the hose, so I put the hose right in front of him and let him sniff the nozzle itself. He quickly stuck his gums in the water and was actually playing in the hose spray! I never would have guessed that would be his reaction, I expected him to tolerate it but not like it so much. So that was a nice surprise!

I sprayed off his shoulders and back but left his hind end alone so it was a fully pleasant experience for him.We’ll get to the hind end in time. He left me pick up and tap on his front feet again in the cross ties. Oh, speaking of, since last time he charged forward in the cross ties and tried to *ahem* hang himself, this time I put a rope across the front to give him the box stall sort of idea, then only attached one cross tie so it was like he was hard tied, which he does well from his previous owner. He seemed pretty okay with that and then started leaning over the rope to clean up spilled grain from Sheza so I attached the other cross tie to keep him in line and he was fine with that too, aside from trying to eat the rope cross tie at first. The other stall has chain cross ties with hose over the chain, he will graduate to that, especially if he persists in nibbling the rope, but that stall is also the more enclosed of the two and I like to start them in the more open tie stall. He threw a couple big yawns in the cross ties too! 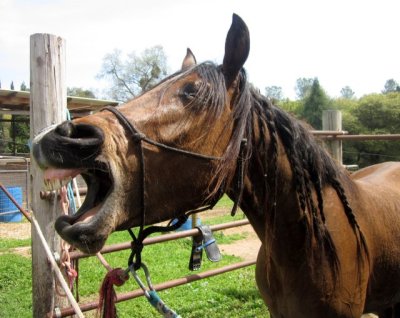 After he dried off, definitely starting to fill out some! His fitness continues to surprise me: 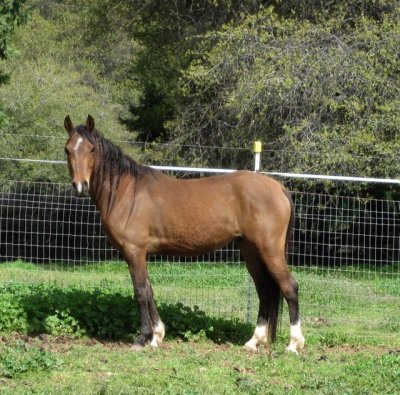 My cruise on Blaze was just perfect, 4 miles or so meandering on the dirt road, he had a few Oohh Aahh Arab moments at the cows and a particularly large and terrifying rock, but was mostly just plodding along . It was relaxing and perfect after focusing with the greenies. I gave him a little of Joey’s post-workout mash and he gobbled it up in no time. He is on regular maintenance rations, no extra goodies as he isn’t doing mileage or working too hard, and isn’t exactly a slender type. He will be my good pony horse for Sheza and Joey, and is doing just fine as he approaches 16 yrs old. Next month he’ll have been with us for 3 years! Wow.

Finished off the day with a great dinner date with my husband, now that’s a fine Easter Sunday!