My husband was kind enough to throw the horses breakfast when he got up extra early this morning (without being asked, I might add!), so by the time my morning routine was done, around 8, they’d had time to eat and I was ready to pull someone and go for a ride. Desire’s shenanigans yesterday suggested her as the clear candidate for some more work, especially since I need to continue increasing her workload and watching for any lameness returning. I’m 95% sure the lameness pull at Hat Creek Day 2 was due to foot soreness after endless miles on rocky roads, possibly coupled with the Goober Glue creating pressure points inside the Easyboot Glue-ons. I am in the middle of some serious scheming for an end of the month change of plans and Desire seems fresh and sound–so work she shall!
I put the padded Easyboot Epics on her fronts and taped Gloves on the hinds. I wrapped the tape for the Gloves carefully this time, 4 times around, and it served me well for crossing water twice and doing some moving out. I did not lose a boot today! But I did blow through an old hind Glove, by the end of the ride her toe had worn a hole through the front of the shell and a nut on the Power-strap disappeared, leaving it dangling. Still, no boots came off! Even when the seriously crappy Velcro on the other Glove’s gaiter wouldn’t stay attached, and was flapping while we trotted until I noticed it, the boot stayed on. Well applied athletic tape really does help. I ended up tying that gaiter together with a leather string I carry on my saddle and that fixed the Velcro problem. With the water crossing and letting Desire power at her biggest trot and some cantering, I’m suuuppperrrr stoked the boots stayed on today.
We headed out from home for the Wildlife area 3 miles away. There are lots of things to stare at along the way and today was no exception:
Desire vs. llama: Stare Down Round 1 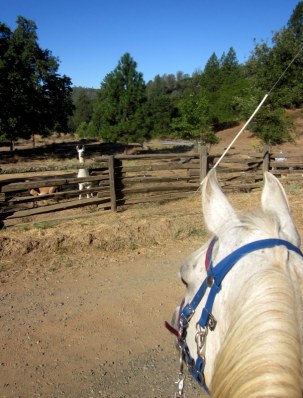 Desire vs. hilarious donkey creature: Stare Down Round 1 of 7. The donkey kept running and bucking along the fence line next to us and it was blowing Desire’s mind 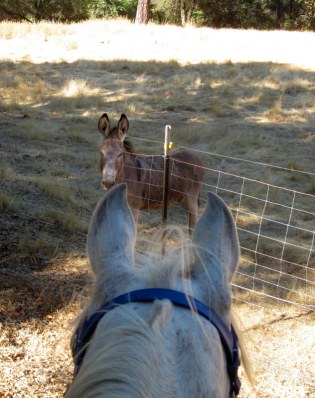 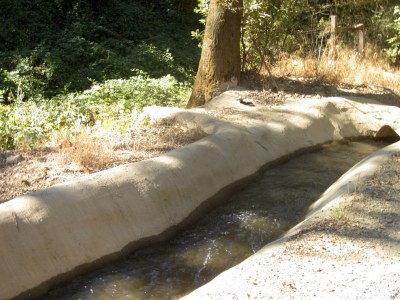 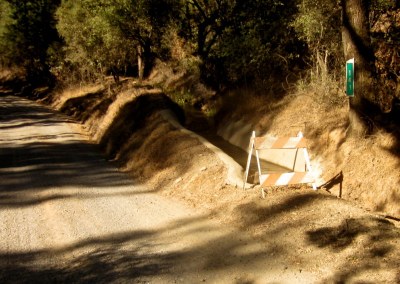 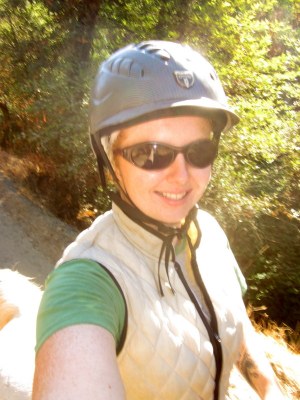 I hadn’t decided if I would ride into the Wildlife Area itself or just keep riding on the dirt road towards our friend’s house a few miles away. To get into the WA I have to have my horse step over the cross bars of the cattle guard to get around it. Cattle are actively run in the WA and there is solid barbed wire fencing around the perimeter and right up to the edges of the cattle guard. It takes a steady brain and hoof to neatly step over the cross bars. Fortunately Desire was much better today than yesterday, still eye balling everything of course but overall just much steadier and more like her normal self. I deemed her capable of safely crossing the cattle guard, and positioned myself on the guard, blocking her so the only way forward was to step over the bars. She did it nicely and I thought we had conquered our only obstacle for the ride. I was WRONG!

As I said, cattle are run on in the WA. The fencing is remarkably intact and the only access is through two small unlocked, but closed, gates. I dismounted, marched up to the gate, swung it open, and lead Desire through. Ouch, suddenly thought I felt a thorn, but no it really hurt–ohshitcrap it’s a bee! Actually many, as they poured out of a tiny hole in the metal gate I had just enthusiastically swung open. I got stung on the leg and the arm and took off running with Desire, who fortunately somehow escaped getting stung.  Now we had ourselves a conundrum. First of all, I had to get the gate back closed since I couldn’t in good conscience leave it and risk cattle getting out. I tied Desire off to a tree a ways away and  she circled it irritably but also stopped to pee, which is always good. Meanwhile I ducked back through the barbed wire fence and kicked the gate closed before fleeing back through the fence and to my horse. The real  problem of course was that that gate and the other next to it (also covered in bees, turns out) were my only way out, so when I was done riding I had to brave the Bee Gates to get home.

A problem to be dealt with later! We headed off into the WA to explore and test our gears.

Stream is low at this time of year, but enough to sip and some green grass, too 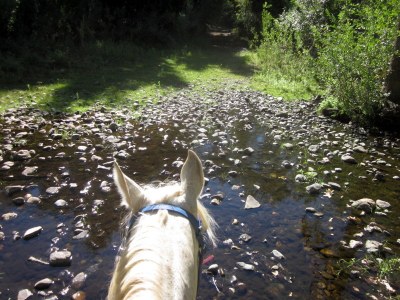 Shallow but better than nothing! Always nice to see green in August 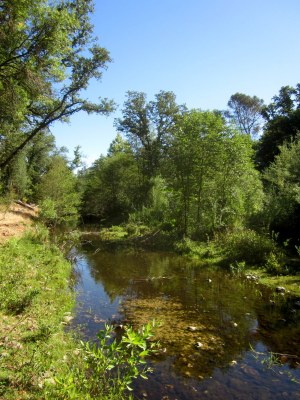 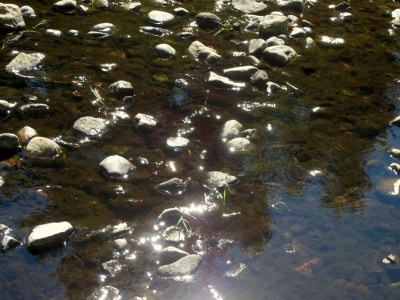 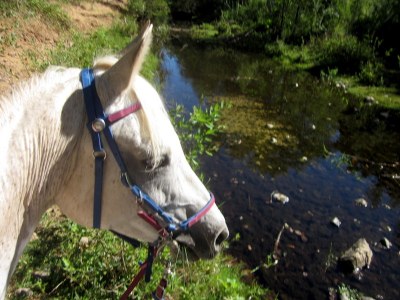 After crossing the water my boots were thoroughly soaked and squelchy and I took off at a high power trot to see if they’d stay on.  I stopped to check them and noticed the flapping gaiter, so the leather string came into play and held it closed wonderfully the rest of the ride. There’s tape under all that filth on her hoof, too. 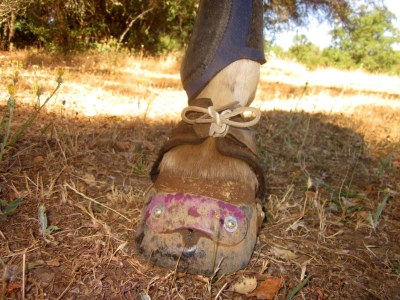 Also in that pic, she’s wearing her new blue Griffin’s Tack ankle boots that I bought at Tevis this past weekend. She tolerated them passably well and they really are my favorite sort of splint/ankle boots. The deep cup makes the fit great and they last longer than any other brand I’ve tried, also the boots are not quite splint length but longer than average ankle boots, a perfect length that keeps the boot in place but doesn’t cover/heat as much leg. Blaze’s green boots are Griffins so now Desire has an appropriately colored pair as well. Unfortunately Henry Griffin isn’t doing very well and as per his wife they are planning to sell out of the tack business, though she thinks they’ll continue making the splint boots. If you ever saw Henry at a ride you know how friendly and dedicated he is and his wife mentioned that he would love to get emails from folks who remembered him fondly, including your name of course, and where you met him. I sent an e-mail to: Henry@GriffinsTack.com and ask that anyone who remembers him send him a little note too.

Anyhoo, the WA is a fun spot because there are wide open spaces and with no vehicle access you can safely tear around at some speed. This is my favorite stretch where I usually stretch out into a canter or even hand gallop: 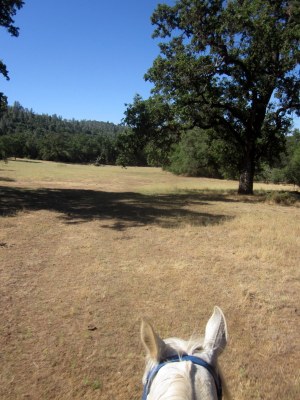 So many gorgeous trees in the WA 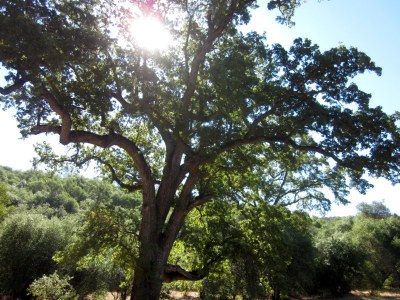 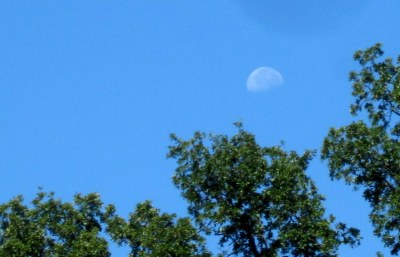 After flying around at a brisk trot and some short canters, with boots intact and my mare sound, I headed back for our scary exit, the Bee Gates. I dismounted and attached my reins to Desire’s halter, left her far away from the gates, and kicked it back open and fled as the bees reappeared. Yeah kicking it wasn’t popular but I wasn’t going to stick my hand in there to try to move it gently. We waited another five minutes til the bees quieted some, waited for a moment where the least bees were visible, and ran like hell through it. Neither of us got stung and we didn’t stop running for a good 1/4 mile, which Desire thought was great fun. I was running at my max to keep up with her huge trot but we escaped the damn bees unscathed! The rest of the ride was a nice meander home, being passed by and waving at lots of cars and a motorcycle or two, endless barking dogs, surviving the donkey fence-runner again, and home at last!

Desire really felt like her old self today. There was no question she was sound and feeling good as we did about a 12 mph trot along the dirt trails in the WA. It’s a great thing and it was just a bonus that her brain was mostly back today, too. Pretty encouraging! And the scheming continues…