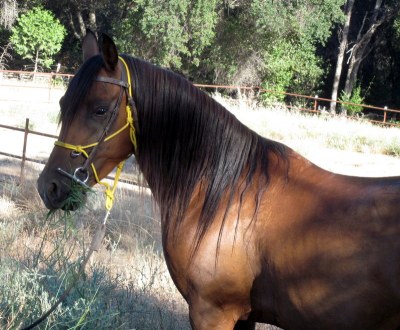 I have other exciting things to post about but will save it for a separate entry since this will probably be wordy–I know, shocker! I just have to write about Joey’s session last night. I didn’t take any photos which translates in my brain to “It never happened.” so if I don’t get this post down now, it’ll disappear into the brain abyss and really, it was kind of a break through moment, not to be ignored.

Last night, Joey was a stubborn, naughty boy. Breakthrough, you say? Absolutely. One of the many things I love about my trainer is how she readjusts my brain to correct Arabian thinking. I’ll usually meander my way to the right answer eventually but often trainer B can just lay down some truth and speed the process way up for me.

Here’s what went down: Joey evaded B when she went to halter him. He was spooky with me walking (way) behind him on the way down to the arena, something he had gotten completely over in the last 2 sessions. He started out in the long lines well enough, but soon started getting stubborn, chomping at the bit and shaking his head when B persisted in asking him to do something he didn’t want to do, he even did a triple direction change spin move completely of his own accord, which resulted in him wrapped up in the long lines, tearing around the round pen like an idiot until he fell over. B got tangled for an instant and got a nasty rope burn across the back of her knee and on her hand. Wait, she did say breakthrough, right? I did.

B pushed Joey longer than ever before and harder than at first I thought that she should. It was hot out and Joey was being a pill and had worked up a dripping sweat, without showing any inclination to straighten up and fly right. The two of them were engaged in a pretty heady battle of wills–B quietly persistent, Joey being mostly uncooperative–for over an hour until Joey gradually, almost grudgingly, started to quiet down and do what she asked. Still it took another 15 minutes for him to complete a full circuit of the round pen at the walk, and though he had backed up in the long lines the first time she asked, earlier in the session, he got sticky about it again and refused to back when she was behind him. If he squirted around and got her so she was alongside him, he would quickly back without prompting, as if to say “See, I’ll do it, but only if you’re where I want you.” Of course that couldn’t be allowed and it was another 10 minutes of focused effort before he finally took a couple of steps backward in the lines with her behind him. B called it at that and turned him loose in the arena to roll if he wanted. He only grazed, and despite their heated session he hung out almost next to her in the big arena and came right to her to be caught. A nice long shower was a reward for both of them, as they were about equally sweaty and dirty.

So in all this sweaty, dirty, naught madness, what was the breakthrough?? The breakthrough, my friends, was the very fact that Joey had enough self confidence to be a complete little shit at all! Since the moment I got him he has been nervous, uncertain, just generally completely lacking in self confidence. He didn’t ever challenge us on things, he just *fled*  Even working in the round pen, his go-to reaction to new or confusing things was explosive exits. Over the last few months he has slowly started to ease away from flight and use more of his “thinking” brain. And then yesterday, from the moment that B entered his paddock, he was sure of himself and thinking about and questioning, if not challenging, her authority. Despite the nasty rope burns from the session, B was all smiles and happy to see this step forward for Joey as a confident, thinking horse instead of a nervous nelly prone to brainless flight. And as much of a struggle as the session was, even to watch, it was kind of neat to see little Joey say “hey bitch, what if I don’t wanna???!”