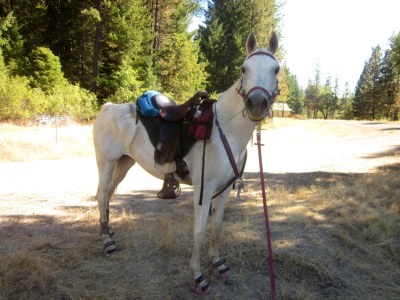 I just didn’t fit all the details into my ride-along blog, so here are a few more things that I feel are worth sharing:

Boots: With the exception of the twist on that wet/mucky boot climbing the crazy steep hill, the Renegades stayed on flawlessly. 90% of the ride was uphill or downhill and there were multiple water crossings and a few mucky spots. By the halfway vet check the straps were just sort of crusted together with mud and dirt and I wasn’t messing with em! I also find the Renegade Velcro a lot easier to clean debris out of after the fact. There were no rubs and Desire was sound sound sound. I love these boots!

Tack: While I used Blaze’s pad and splint boots, they are the exact same as Desire’s but in a different color, so my tack was all the same as it has been, with the addition of course of the cantle pack which I have used at every endurance ride and do train with on some at home, though not frequently. Everything with tack was fine except for the back soreness, of course, which I suspect was related to the cantle pack?

Diet/Gut Sounds: Desire had her usual Hay Mountain of locally grown grass hay (with a bit of grain in some bales), and big sloppy mashes of Elk Grove Milling Grass Hay/Rice Bran pellets, with her daily dose of Quench mixed in. On the trail I pulled and hand fed grass and fed her bites of carrots out of the baggie in my pommel bag, and she grazed very briefly a few times along the way. At lunch she ate another horse’s mash (same as mine plus Omolene of some sort) and alfalfa, and after the ride she ate as many carrot bites as I would throw into her fresh mash and nibbled some hay, but wanted to nap. After dinner I returned to find she had eaten the whole mash and had moved onto her hay. She pooped and farted her way along as usual and throughout the ride her gut sounds were an A where in the past they have been a B more than once. Every time I woke up last night after the ride I could hear her chewing hay. Arriving home this pm she had another big sloppy mash and plenty of hay for the night.

Hydration: Desire gets a daily dose of Quench in her mashes and I syringed her EnduraMax-Plus during and after the ride. The next water break after peeing, about 10 miles in, she started drinking and drank reliably the rest of the time. She peed 3 times on the trail and again back at the trailer after the Finish.

Back Soreness: I have never had a back sore issue with Desire before, and did not change the saddle set up. The only 3 factors I can think of are 1: extreme & prolonged uphill and downhill 2: Saddle pad “molded” to Blaze’s back and fit her differently? 3: carrying the heavier spare Renegades in the cantle pack over a long distance for the first time may have caused the saddle to bend down in the back? I felt like it wasn’t riding completely square and did adjust it a few times. This was my first endurance ride in the Renegades, I have trained in them and trained with the cantle pack carrying the boots, but never more than 20 miles with the cantle pack on. The Renegades are undeniably heavier than the Easyboots, and I’ve heard through the grapevine that a heavy cantle pack can bend the back of the saddle down and throw off the Specialized sometimes, but I don’t have experience firsthand with it until now..so if anyone has thoughts, please chime in! She was sore just to the left of her spine where the skirt of the saddle sits, it was muscular according to the vet, and it was slightly raised after the ride.

Camping: Loved my Arabian Nights tent-under-canopy set up as usual and highly recommend anyone still suffering through an air mattress go get a firm foam mat or two instead. LOVE the firm foam and I swear sleeping on it after a ride does my body more good than my bed at home. My Olive barrel with a spigot at the bottom and about a 5 ft hose on it made it so I don’t haul water and can easily make as many sloppy mashes as Desire requires. Another cheap innovation of my husband’s that rocks my socks.