If Blaze were a human teenager, I could have accurately said that he was acting his age on our ride this morning. OHMYGOSH. But I don’t wanna. Are we there yet? OMG, I’m going to be dramatic now. Since he is a horse teenager, I foolishly expect more out of him. Coz you know, he’s been around for 15 years, seen many things and places, has “worked” in many disciplines, gone hundreds if not thousands of trail miles–and those last three are only in the last 3 years, since I bought him. Still, I think we all know our horses often don’t give a fig (or an apple) what we expect of them, and in keeping with such, Blaze treated me to a full fledged Green-and-Balky ride this a.m.

I had been avoiding taking Blaze off the property recently as I didn’t want Joey spazzing about on his bad foot, but since Joey was running laps around his paddock for breakfast this morning I concluded he was sound enough to be left on his own.

Out into the neighborhood 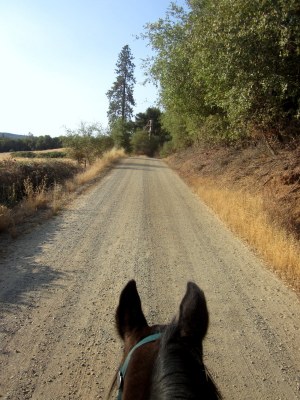 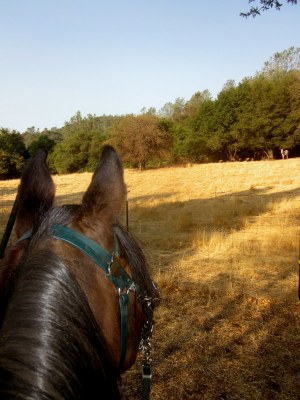 He did the usual stop, spin, stare at the approaching donkey. But then the herd of creep little sheep started running toward the fence line too and Blaze about lost his shit. Closest he has ever been to completely going nuts and bolting, which I only let escalate to shrinking and back pedaling with his nose to the stars, before smacking his neck and getting him to move forward. I had to snap him out of it a few more times and he got so ridiculous at the cows running down from the neighbor’s top fields for morning breakfast (bad timing there!) that I actually dismounted and led him through it. He froze stock still, neck like stone, quivering, and I could feel his heart hammering under me! I said THAT’S IT and got off.

Looking all serene–bullshit I say!

He mellowed out some after we passed the cows but it wasn’t til 3 miles in that he really relaxed at all, despite his cool gaze in photos!

Turning around at the water crossing, nice to wade in and lots of great grass for the horses. 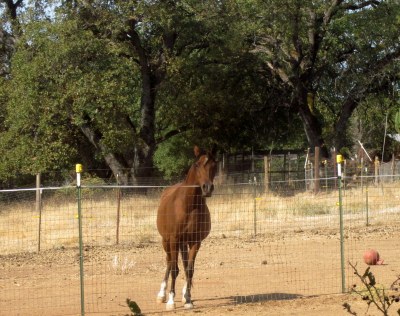 *************
These are Blaze’s left front and right front, respectively. Please feel free to say any and everything about them, any readers who maintain their own hooves. My camera literally died and shut off as a snapped the right front, so these are the only hoof shots I got today.

See how on the left front the frog kinda collapses down into the grooves? Pretty separated white line at the quarters? 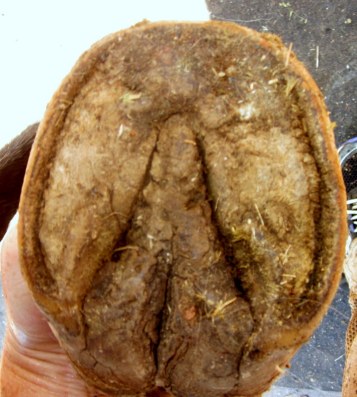 Found this shot of his left front after the trimmer worked on it this summer.. 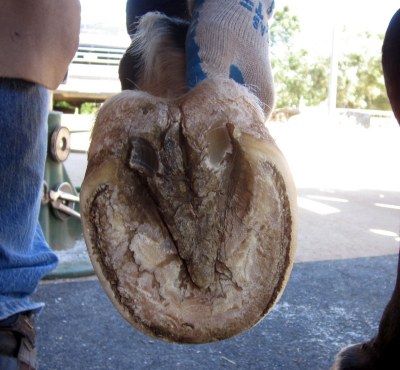 His right front hoof is FUNKY. It has the higher heel, always has, which is kinda smushed/collapsed on the right side, as referring to the ride side of the photo, below. Also there is an old quarter crack on the left side, as referring to the photo below, hard to see coz the darn cement is almost the same color as the hoof at that point. He just has a weird heel on hoof and it looks like the toes grow forward narrowly from it..I am too amateur yet to talk about all this correctly or fix it myself, probably, but I am playing around every day and I appreciate any insight from hoof saavy readers.
Right Front

5 thoughts on “You’re a Teenager, Act Your Age!”

Whiskeytown Mess Around
In Omnia Paratus
Trails (and Trials)
Haiku Farm
It seemed like a good idea at the time
Dr. Mel Newton