A friend and former coworker lost her beloved mare yesterday to a trail injury that at first seemed simple and in the end was tragic. I knew the mare as a filly when she and the gal were first bonding and coming along together and they had a great relationship that had budded into a successful endurance career. My heart just breaks for her. Another experienced endurance rider lost his horse and is recovering from a fall from the Tevis trail this week as well. It’s such a knife edge that we balance on, riding horses and going out adventuring in the wilds, it’s amazing what we get away with, how lucky we generally are–and so tragic when it goes wrong. My best wishes and prayers for all that have been injured, lost, or suffered loss in the last few weeks.
I wanted to spend time with my own horses this morning, so Blaze and I cruised to the top of the ridge. After a few hot days the temperature dropped significantly again last night; today is easily 20 degrees cooler than yesterday, so I climbed most of the steep ridge on foot, listening to Blaze clop clop in his Renegades behind me.
Cute lil Blaze

Had a couple good strong uphill trots, though mostly he wanted to canter, and I might have let him once..

Just about to the top, taking a breather but hey, pricked ears! Get the camera!

I trimmed Blaze’s hooves after I got back and when he was done I left him to snooze in the cross ties and fetched the filly out to do her hooves. She was *really good* today, eyeballing everything suspiciously as ever–her mother’s daughter to the core!–but there was no melodramatic spazzing and I timed the few corrections I needed to just right, which doesn’t always happen but did today and made for a thoroughly positive experience all around. I totally spaced checking her height while she was out, oops! 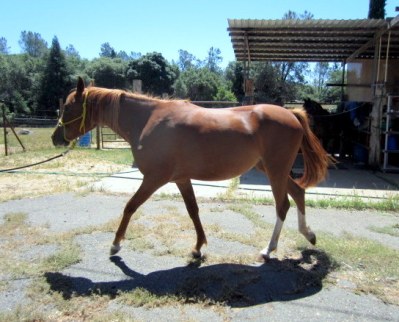 Snotty filly face, but there is her pretty head and long mane

Not bad badonkadonk for a 2 yr old Arabian! She and Blaze sprint the hills in the pasture at least a few times every single day and her muscles are pumping up all of a sudden 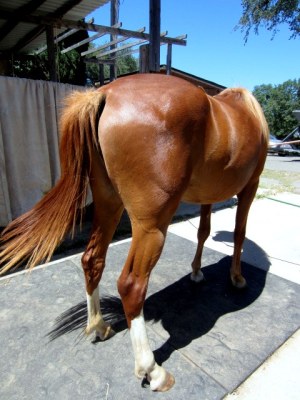 Good filly getting her trim 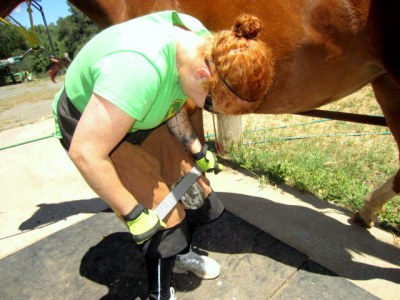 One thought on “Love & Luck”