If you are unimpressed by animals frolicking in snow, this isn’t the post for you. However if you, like me, could watch animals interact anywhere let alone in the novelty of snow, join me and scroll down for some cuteness!

Friday afternoon the promised snow arrived, and come morning there was about 3 inches on the ground. The ensuing overnight temperatures in the teens have kept white on the ground even through to today. This was the most snow we’ve ever had since moving to our property in 2010 and a First Big Snow for my year old puppy Kodiak and 2 1/2 year old Sheza.

Cozy horses in the barn with snow behind them 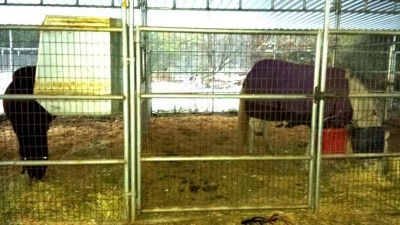 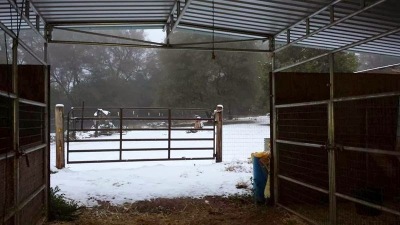 Sheza was tap dancing in place like an impatient kid while I haltered her but when we came to the end of safe barn footing and beginning of Scary White Footing, she had to think about things!
Sheza: Meet Snow 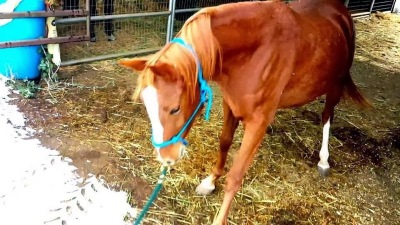 A giant leap, a buck of surprise when all 4 hooves touched WHITECOLD,
then off to learn to use her herself in this new footing 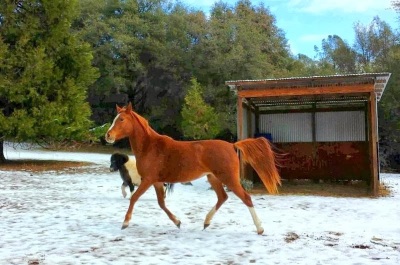 “So in the other place there was lots more white stuff and it stayed for months
and there were no stalls?!”
Desert bred filly asks Scrappy the ways of his Nebraskan people

Scrappy himself was quite the opposite. He was not perturbed by the cold in the least, as evidenced by his healthy winter coat and drinking trough, the only one with a perfect muzzle sized hole in it. He was less pleased about being put into the box stall Friday night, and was quite happy to be back outdoors in the snowy a.m., in fact eating every less scrap of his snow covered hay leftovers rather than the fresh feed I put out with him! You know your horse is from Nebraska when….

Blaze was doing airs above ground, in hand on my left, on our way out from the stalls, while Desire, ever businesslike, beat out a no nonsense march on my right.

Blaze was frisky, Desire was wondering where the hell her blanket
was going and where her hot mash was

And finally, silly puppy Kodiak, who SPROINGED through the snow, poking her nose deep in the snow and snorting every three bounces. The two youngsters love the snow, while the more senior dogs can barely be bothered to leave their beds!

This morning it was 18 degrees and our water pipes are frozen solid. Nothing like a tea kettle shower, it must be winter. Still it’s gorgeous and sunny and there are (bundled up) adventures to be had!

Stay safe and keep your critters warm, everyone