Blaze and I skeedaddled the 2 1/2 hrs north to Whiskeytown Lake area and joined a local friend and her riding student for some hilly, rocky, lovely miles. Her student is going to be riding her first LD at the Whiskeytown Chaser endurance ride coming up in just a few weeks! She is a great little rider and I have a sneaky feeling she’ll be hooked after one ride.
heading out 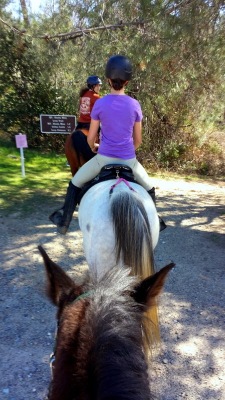 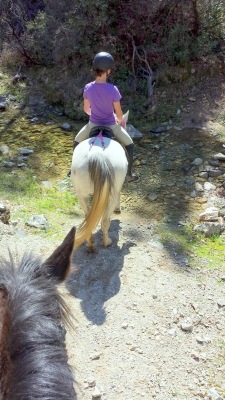 Ermahgawd!! It was the Whiskeytown Chaser ride manager coming down the trail measuring that got all three Arabs looking here

trotting out on some great footing

Tera convinces her new greenie that water crossings are FUN 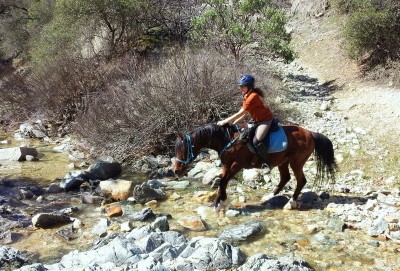 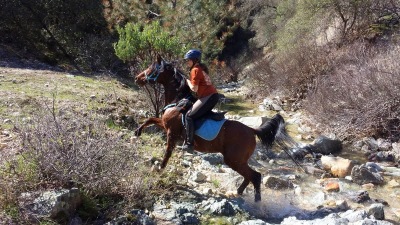 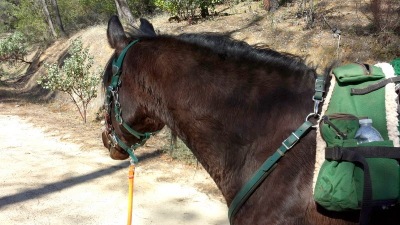 We got a solid 10 miles done in the heat of the day, with some decent hills and technical footing thrown in, and10 mph trot sets on the friendlier stuff. Blaze’s feet were looking fabulous and I knew he’d be motivated on new trail with new horses, so I put him back in front Renegades this time to see if he really did trip and go that badly in them. Yep, that’s how much I hate using Easyboots 😉  He didn’t, in fact, get clumsier, which may be leftover from riding him barefoot so much lately which clearly got him more attentive and better with his feet? He giraffed a bit when we trotted out but even then was pretty clean with his size 2 clodhoppers. I guess from here on I will just swap bare and Renny booted, on the theory that riding him bare intermittently, where he has to pay attention to rocks and not blindly blunder on, will keep him slicker footed wearing the bulkier boots.

back to the rigs

He peed! he ate! he drank! He could have used some electrolytes, too, but overall my little ole fella did great 🙂

We got home in the dark even with the deliciously drawn out evenings, and it was totally worth it. What a great day!