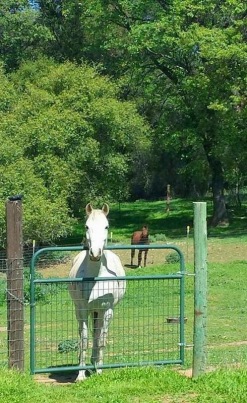 The weather has been gorgeous, the grass is finally green and lush, and the horses are shedding like crazy. Rambo has been here just over two months now and is losing his more red winter coat fast and furiously, but not thoroughly, yet. He is a sort of patchy toasted almond brown right now, but with all that shedding I also discovered that he has a definite dorsal stripe down his spine, like my other mystery craigslist bay Arab gelding, Blaze. They are from the same area, too, and built similarly. A friend has another little bay of similar build from the same area as well and we are working on a conspiracy theory that they are from the same breeder, yet to be discovered. We’ll probably never know, but what fun to speculate! And how odd that Rambo has a matching dorsal stripe, really. Did I get a photo of said stripe for this post? Completely forgot, of course, but here’s some other photos instead!

Rambo out on Sheza’s hill 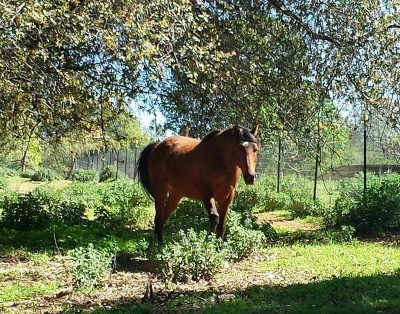 spring in the asian pear tree

Scrappy is resting up for his first AERC 50 of the season in 2 weeks and Blaze had a cut on his heel bulb so I was giving him a week off, and I found myself in the unique position of owning 6 horses and having nothing to ride. The rest are too young or too old or too green! Ah well, there’s certainly always something to be done, and preferably with the ponies on a gorgeous Saturday.
My eye fell on the patchy coat of Rambo this fine morning and I decided to pull him for a thorough shampoo bath, de-worming, and hoof trim. I actually thought ahead this time and did the bath *before* the trim, so that his hooves were soaking up the moisture on the mats for the duration, making my trimming job at the end so much easier.
I must do a little fist pump here, because he walked away from that trim landing so obviously heel first and better than before it! Woot! Hooves are fun 🙂

the right, scarred flank, looking pretty booty-licious now! The scar is hidden in that line of soap/shadow just behind his stifle 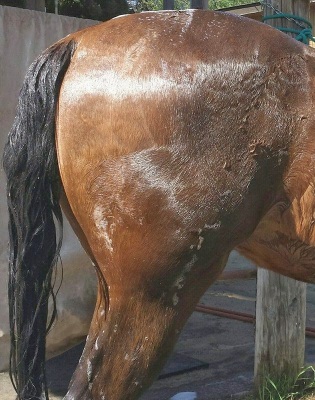 Rambo drank from the hose and proved pretty much unflappable for the thorough scrubbing, his only anxiety being about the water running down his hind legs and that was very mild and given up when he realized moving away and lifting them in protest did him absolutely no good and standing quietly for it actually earned him a cookie. Turns out, Rambo will do or tolerate most anything for a cookie! And a mash chaser doesn’t hurt 😉

3 thoughts on “Welcoming Spring with Shampoo”