Two months ago, not long after her third birthday,  I dropped my first born filly Sheza off with good friend and horse trainer April Moore of Moore Horses. When Sheza was born I would have been put off at the notion of getting her under saddle at 3, but I didn’t know near as much then, and if you aren’t willing to revisit decisions when new experience and facts come to light, then you aren’t evolving in my opinion. Sheza is the third Haat Shaat Arabian I’ve owned and there is a definite consistency in the bloodline. With their blowy dramatic spice and sharp brains I am now firmly convinced that they do much better with lots of handling from early on. I’m very aware of how late maturing Arabians are and certainly don’t advocate working or riding youngsters hard, but having seen the mindset of Haat Shaats left to their own til devices until 6 or 7 or later (think explosively spooky, mistrustful), I’ve been more and more of the opinion that the more exposure and training uploads to their brain that you get done while they are relatively young, the smoother the journey through the rest of your lives together will be.
Sheza has lived up to the snorty, expressive habits I’ve seen in the others but thanks to her extensive handling and a carefree first few years full of positive experiences but a very definite line of discipline, she is 110% a human horse, has a wonderful desire to please, and her investment in being dedicatedly spooky and dramatic is already so much less. Still, at 3 years old she is already 14.3 hands and has those moves like Jagger as they say, so ever since I became aware of the training wonder that is April, I’ve been sure Sheza was heading her way for saddle training.
Sheza’s first day at training w April, 2 months ago

April was wonderful about updating me nearly daily with photos and progress. Sheza is a clever girl but had a few things to work through, like her dislike of having her ears handled, and behaving herself properly when she’d rather be a rushy snarky fiery filly. April and I discussed where she was in her training at the end of the first 30 days and we agreed that Sheza could use another 30 days with her to cement what they had going and get some other experiences of various kinds–and lo, not a week or two later she managed to bang up her leg at April’s and got to experience being hauled about in a strange trailer, left overnight at a stranger vet’s, and ultra sounded! See, horses are so obliging. 😉
fresh ouch 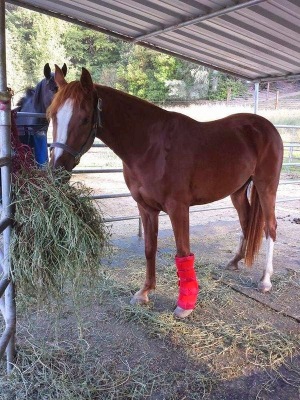 Two weeks rest and a revisit for the all clear, woohoo!

I certainly never want my horses to get injured in any way but I must say that the silver lining to that incident (aside from it being minor!) was the great exposure Sheza got to a new trailer, strangers, overnighting at a strange place, etc. For an “expressive” filly as they delicately put it at the vets, all these things are vital to channeling her into that happy safe buddy who *enjoys* the world experience.

Sheza’s leg looked great long before the two weeks was up but we weren’t taking any chances, so after the prescribed rest and the all clear from the vets, Sheza returned to work for a week or so for a brush up before I went up to get her. Finally though, this past Thursday afternoon, I arrived and got to see my big red filly girl in person again! 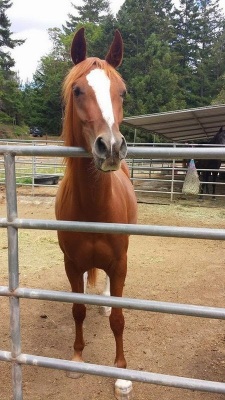 I was immediately struck by how much she looked like her mother in the head, and how much smaller she seemed than I remembered. To be clear, she looks fabulous and fit, but in my head she is a big fire breathing red dragon filly and here she was, so mature looking, a wonderfully conformed but quite regular sized Arabian!
(of course, she still has 3 or 4 years of growing to do..)

As you might expect after waiting since the moment she was born, I was ready to hop on Sheza the afternoon that I arrived, so after watching April work her through some brief ground work and blow off some steam under saddle in the arena, I took a deep breath, put my foot in the stirrup, and up I went! My heart was in my throat with excitement and a little nerves but luckily this was old hat to Sheza:

From there it was awesome. Sheza is young and green, and I am green in various ways, but April has installed such a fabulous base on this filly in this relatively short time, that the buttons are there to press if only I configure myself and my asking and my filly correctly! Having recently accepted the fact that my Rushcreek gelding, while very trail broke, is not truly *trained* (as in, to him leg means GO and bit pressure means GIRAFFE) having my three year old come up under herself and give to the bit at the lightest sponge of the reins, yielding gorgeously off my leg, was A.M.A.Z.I.N.G.
first ride on my girl!

Sheza is very forward and of course likes to lookey loo like her mother, so on our short trail rides during the few days that we were there we worked on going back to our arena circles/figure 8s when things got rushy on the trail; for the most part Sheza was just fabulous, clearly happy to be out there and all for stopping for snacks whenever given the chance. If you ride an Arabian or rushy horse in general I’m sure you can appreciate how amazing it is to just *sit still* leaning on the saddle horn while your spicy filly with only 2 months training calmly grazes. It’s not voodoo or trickery, it’s the correct base work and time spent patiently by April, but it does have a bit of a magical feel to it all.
first trail ride

Me on Sheza, April on trainee Spirit

I’m pretty solid in my riding and responses to shenanigans while in the saddle so I found my main challenge with Sheza to be the ground work at liberty. I spend approximately zero time lunging or ground working anyone at this point, and it shows. Blaze round pens beautifully off the lightest body language but he doesn’t *need* the round penning so I don’t do it. Scrappy will soon be spending quite a bit of time in said round pen, but hadn’t yet. SO, my body language working in the round pen was quite rusty and I managed to confuse myself and Sheza, but only briefly. Once she realized my directions were correct(ed) and had intent she went from disrespectful to polite working filly on the circle quite quickly.
swoon

April had some other horses in training as well as her own lovelies in her herd, so I got to have some fun riding Quarter Horses and helping her out a bit as well. Again I wouldn’t have thought to desire a QH offhand but I must say after a few days I saw the infinite value of a big, solid bodied, handy horse for teaching youngsters and getting shit done. I pony off my guy Blaze at home but at 14 hands/maybe 700 lbs he doesn’t have a lot of oomph or solid pull if a ponied horse gets silly.
ponying April’s long yearling Arabian filly Tori from a nice QH mare also in training 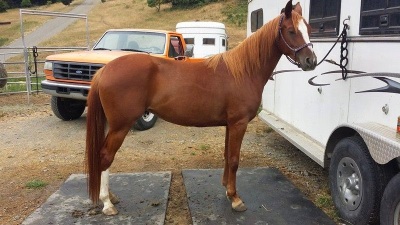 The second day I kitted Sheza out in her mother’s bridle and my treeless Sensation, since she’s been working in April’s tack and I needed to figure something out for her. She went quite nicely in the beta bridle and simple jointed snaffle April sent with me, and while she was a very comfortable ride in my heavenly sheepskin setup I’ve recently dialed in for Scrappy, the Sensation is definitely too wide for every day use on her. Yep, you read correctly, I figured out saddle fit on one horse just in time to puzzle over another!
back on the trail with trainees

We match our truck so well 🙂

The temptation to stay at April’s learning and playing forever is strong, but Sheza filly and I hit the road for home yesterday morning. It was gorgeous up in Humboldt county for our stay–and 5 1/2 hours later, it was 102 here at home in the foothills of the Sacramento Valley! Fortunately Sheza is well used to our charming summers and she seemed quite happy to be home in her big pasture.