After weeks of temperatures over one hundred degrees we woke the other morning to the relief of cloud cover and a world gently washed clean overnight.

The break has lasted for a couple of days now and while the humidity is undeniable the double digits are heavenly. You can almost hear the land slurping up the pattering of moisture eagerly; the horses seemed a bit disgruntled by the warm wet, except Rory, who currently isn’t bothered by much except the SWISHSWISH of the fly spray bottle.  Life is good with groceries in front of your nose!

The light rain and epic dust made for some filthy ponies so Scrappy got a cool shower with moist boots on to help soak his rock hard feet before I trimmed him.

Rory seemed pretty interested in doings and was due for some handling time so I took her for a walk around the place when we were done. Another fun perk of our 20 acres is that just going out and exploring Home can be quite the experience, with so much to see for youngsters at various training levels. My husband scraped in a pretty good little track with the tractor last fall that winds down out of sight of the house to the bottom of the biggest pasture and on back up the hill, which is my current “trail” riding for Sheza and I. We’re also working on clearing another little trail out back through the wooded acres behind the gelding pasture. Meantime, there’s also truck and boat and hay bale and dirt pile obstacles to present learning fillies with, and Rory really takes it in stride. I don’t know entirely what I mean by it when I say “she should be an obstacle horse trick pony” but that’s the kind of attitude that I think this gal has: a healthy sense of curiosity, an oral fixation, low on the reactive spooking scale, and perhaps what it all really adds up to: a sense of mischief.

Here’s a tale of two genetic lines: 18 year old Haat Shaat Arabian Desire is not happy about standing on black mats, ever. Hoses are bullshit, for that matter. Combine the two, and it’s a pack of woes. Then you have one year old Rushcreek Arabian Rory behind her, busily goosing her, chewing on her tail, or kicking anything that clanged loudly and resulted in Desire jumping mid hoof trim. I may have thrown a grain scoop in Rory’s general direction and she may have marched around with it in her mouth after. 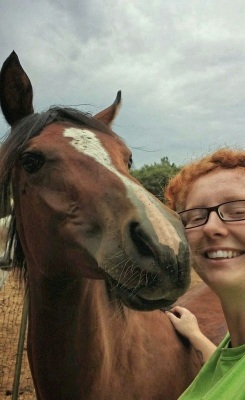 Then there’s this off roading Rory charged into voluntarily today on her walk about. She really liked this dirt pile. 🙂

So much filly fun!