Ask almost any endurance enthusiast to tell you a ride story and you’ll probably be met with a broad grin and a tale that could contain completions, placings, goals met–or things going completely sideways–or both! Whatever the finishing result the story probably also contains excitement, joy, fear, frustration, pain, exhaustion; basically it’s safe to assume you’ll run through most of the gamut of human emotions out on the AERC trail. Whether you are riding your first LD, a long awaited 50, a bucket list 100, the mental and physical journey will be there. There are undoubtedly levels of difficulty and necessary preparation within those distances that must be acknowledged and respected. At the end of the day though, every person that crosses a start line at one of our beloved endurance rides has started somewhere, paid their dues in some form, packed their everything, kitchen sink, AND hopes into their rig, and if they’re lucky, set out down the endurance trail on ride morning on a good friend with a dream in their heart.
Oh the places it takes us! Nevada Derby 50 2014
Photo credit Baylor/Gore

My passion for endurance began in 2001 when the previous owner of my first horse told me that she went camping, rode all day, and then got fed hot food and maybe did it again the next day–and it was a *organized thing that people did.* As a horse crazy 13 year old girl, nothing could sound more delightful, and without hesitation my rangy buckskin Appendix mare and I in our free postage stamp English jumping saddle and cheap local tack store leather bridle joined the awesome elderly ladies on their biothane-clad Arabians on weekend training rides. Previous to my owning her my mare had failed an AERC ride attempt or two due to being wickedly high strung and incapable of pulsing down if the day didn’t go her way, but she and I were birds of a feather and we beebopped our way through our first LD in fall of 2002. By beebopped I mean the riders all passed a spot in the trail where nearly all the horses spooked violently including mine and my sponsor’s. My sponsor was thrown and got a nasty concussion, but our horses stayed with us, she mounted back up, and we made it slowly to the halfway vet check. People were immediately networking on my behalf and I was picked up by another kind rider and my now-concussed sponsor insisted that I go on. My angsty mare magically transferred her affections from sponsor horse to new sponsor horse, and away we went to a fine finish. It was completely thrilling and terrifying and while it was technically a limited distance ride, I have been calling myself an endurance rider ever since.
No ride photos from those early LDs but here’s my pretend endurance horse and I
being pretend show people at the local county fair, circa 2002  😉

Of course, the journey won’t always be smooth, from mile to mile, or ride to ride. That’s the thing about endurance riding–it’s a highly concentrated mini roller coaster ride in life, while you’re busy living the roller coaster ride of the rest of your life. Hours and miles spent on the trail in concentration on a goal, getting to know your horse, breaking through on challenges presented and then not for a while, all strengthen, though sometimes the word seems more like toughen, your mental and physical hides. Perhaps most simply put, and in the colloquial meaning, it “builds character.”
my right ankle, fall 2009
not according to plan…builds character! 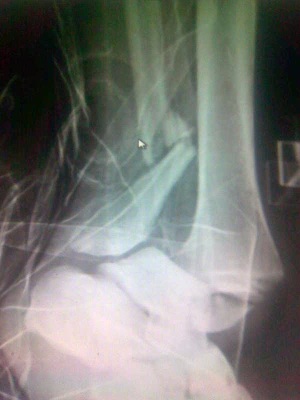 Blaze and I @ Whiskeytown 2011
We were Overtime by max 10 min & didn’t get completion..
not according to plan…great ride though!
photo credit Christie B’s Photography

To not turn this into a novel, let me summarize by saying that it was 10 years, a lot of lessons, and 220 LD miles before I rode my first 50 milers, on Desire, in March 2012 at Cuyama XP.
Cuyama XP 2012
Photo credit Lynne Glazer 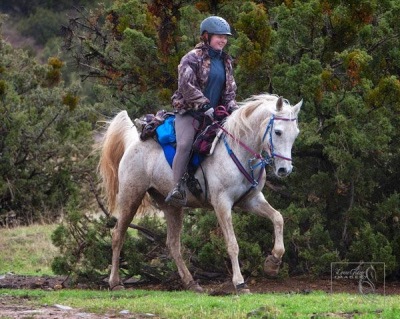 While only 2 years ago, that photo seems a lifetime (and definitely was 45 lbs!) ago. Every ride, every ride weekend, every month and year are so packed with opportunities to learn and grow and enjoy, if you can overcome and thrive against whatever life and endurance presents you with.
My ride season plans didn’t go at all according to plan this year, but at this point in endurance and life, I’m pretty much okay with that. Scrappy and I completed the first leg of the NASTR Triple Crown in April but then played with saddle fit all summer, which ultimately means that we spent a lot of time together figuring out nuances and filling in training and relationship holes, and I realized yesterday just how truly valuable all that time was.

We hit the trail early and my saddle set up, finally, felt perfect. I’ve been having finicky issues getting my Skito and Sensation treeless saddle just perfectly lined up together, as well as fretting over the inch or so of back and forward slide I get on steep up and downs, despite crupper and breast collar use. For once though I got everything just right and was not obsessing over tack for a moment or two. Unfortunately the air at the lake was smoky from wildfires both north and south of us, the worst air quality all summer, so my original mileage plan was immediately tossed out the window. Ah well, as you’ll find in endurance, that’ll happen.

Despite less than ideal conditions, Scrappy and I were so clearly in tune with each other that we cruised a few miles at a sedate pace, including passing the trailer and adding another mile or two walk solely because Scrappy attempted Snarkitude regarding Being Done and Going to the Trailer NOW. On the way back he bobbed his head at his foot once so I gave him a “Woah” to give him an opportunity to scratch, and he immediately halted on a downhill and scratched his chin with a booted hind leg, with me perfectly balanced in the treeless on his back.  It was a moment of perfect balance (thank god!) and quite a nice change from the sudden halt and fling his head down without warning that our early days together entailed. When he’d taken care of his itch he moved smoothly on and a few minutes later the clouds shifted and I glanced over my shoulder and was captured by the light.

“HEY Scrappy, look at that!” I exclaimed and he immediately stopped, turn his head to where I looked, and I snapped this picture:

It was a hot, smoky, not according to plan ride, but it was maybe the best ride I’ve had all year. Of course, even as my flouted goal frustration cools and I embrace the relationship instead of the ride record I’ve built with my horse this summer, my little endurance demons have started dancing on my shoulders again, and I have a ride yet again in my sights.
Just my first 100, no big deal. !!!
And so the life and endurance cycles continue.
look! Scrappy really is a grey! kinda… 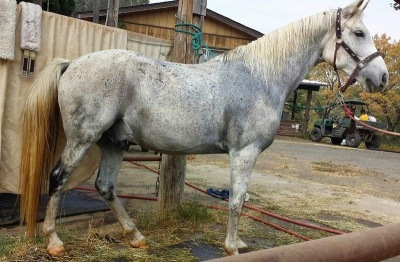 3 thoughts on “Endurance is Life”