I really know that autumn has come when I start riding all of my horses–a lot! Don’t get me wrong, I ride in every season, and in theory mean to pursue endurance each and every calendar year, but like life, that always takes a slightly different form. As a redhead with heat issues I regulate my summer riding somewhat, and in general I don’t ride nearly as many conditioning miles as I used to when I first got into endurance. Good thing probably because if I tried to I think my Rushcreek Tracer (Scrappydoo, to you) would mutiny altogether. As it is the poor bugger went almost 30 miles this week! In fact with buddy N’s assistance, all three of my saddle steeds saw the trail this week, lucky critters.
First there was Scrappy and Sheza:

And then Scrappy and Blaze: 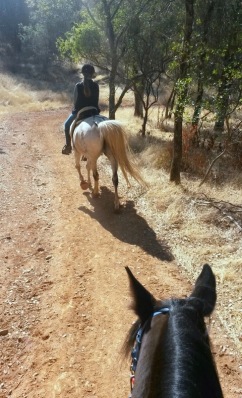 N brought her Freeform Liberty and I rode in it on Blaze that day– and it was magical! The first saddle that I ever felt that “aha, this is my seat’s happy place” moment with was the Specialized Trailmaster that I bought right off the horse in Utah a few years ago–but now that I’ve ridden the Freeform Liberty I want to sell or trade one of my saddles (Frank Baines or Trailmaster) and get a Liberty, stat! Even as absurdly wide as Blaze is, it was SO comfortable, and he moved out fabulously. For whatever reason I could actually SIT his ridiculous trot somewhat too–not the extended one, god no, but at least the slower pace. Blaze is a kidney pounder, the type that tosses you nearly a foot out of the saddle, forcing you to post or more ideally 2 pt, so sitting anything is a bit unheard of on him.  If anyone has a 17.5 or 18″ Freeform Liberty they want to sell or trade, let me know!
Scrappy sleeping off that 6 mile ride..Blaze in the Freeform

Meanwhile, in Filly land….
(Step) sisters have such beautiful relationships..
“I HATE YOU!” 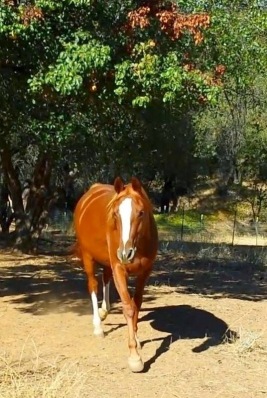 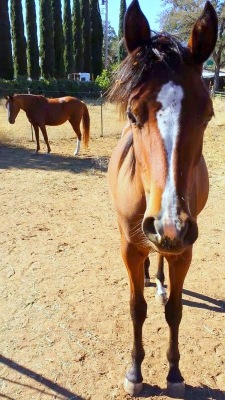 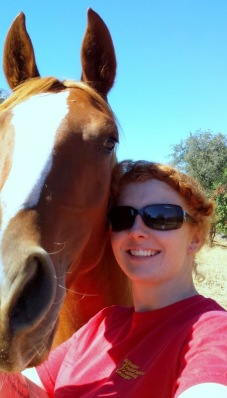 Yep that rump is almost as high as Sheza’ s– just no other body part. Ah, babes!

Last but not least, I FINALLY managed to get in my 15 mile (actually 16.5, ah thank you) ride with Scrappy this morning. I’ve meant pretty much all of the last rides not also involving Sheza to be 15 mile rides, except due to smoke or tack or changes of plans they’ve fallen way short. With 20 Mule Team 100 in my sights at the end of February but first hopefully a 50 or two coming up in November, I really need to be testing my tack on longer rides and making sure that Scrap and I are properly prepared.

someone on FB asked if he was dirty or  if that was all just “Scrappy markings”
I’m going with the latter!  That’s really rather clean for him.. 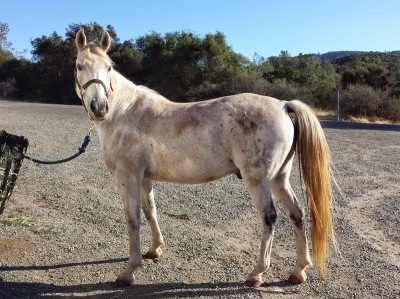 you want to go how many miles? 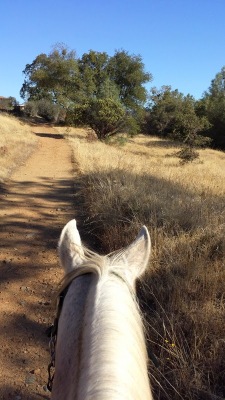 lovely quiet morning on the trails

While we did manage to rip a boot shell off the captivator after a water crossing/uphill combo, we otherwise had a solid (warm!) conditioning ride, finishing with a happy back and lovely even sweat mark at the end. Phew. Onward and upward!

One thought on “Autumn Trails and Silly Fillies”