If you’ve tuned in before, you may have done some reading on my thoughts regarding the risks of assumptions with horses.  Of course, I’m so cleverly human that I can write a long cogent blog post on the issue and then completely disregard my own advice and thoughts and be freshly surprised at the shenanigans of horses thought to be Something They Maybe Aren’t (Yet?).

Today we revisit the land of assumption-overturning Rushcreeks, but instead of focusing on Scrappy, this is about young missus Rushcreek Aurora, she of the freckled blaze face, who shares my name–and apparently my independent streak and cool planning brain. Aurora arrived here in April at 9 months old with minimal handling. From the moment she marched off the transport trailer and coolly started grazing I knew I had a different sort of filly on my hands. It’s understandable that a young horse in a new setting may glance askance at it’s new human, be nervous, maybe take some time to settle in. What was fascinating about Rory was that as a 9 month old, suddenly 1500 miles from her birthplace, she seemed to assess her paddock, the horses on either side of her, and that was that. There was simply no drama. Also remarkable to me was the fact that she had zero interest in me *at all* for the first few days. Having raised the ever affectionate and attention demanding Sheza, this was some cool treatment from filly #2, but we’re all individuals, and fair enough!

As Rory gained weight, shed out, and generally came into her own over the next few months, I found her detachment from humans still a bit head-tilting, but was *thrilled* with her steady, non dramatic approach to, well, everything. Sheza has put me through the OhMyStarsICouldn’tPossibly! Show on catching, haltering, feet handling, haltering, hoof trimming, bathing, haltering, tying, blankets, the list goes on (and yes she really did revert to un-catchable that many times in her wee youth). The resistance doesn’t necessarily run deep in her, but the Show is *always* there, and learning how to buy a ticket for the ride but not react back and jump off in fear/frustration has been a truly invaluable learning experience for me over the last few years.

Cue Rory, who’s one and only catch/halter issue was the first catch after her arrival, consisting of 25 minutes of relaxed trotting around and a final and very obvious stop, sigh, Whatever, Do your thing Human. With the exception of spray bottles, that final attitude has held on everything I have presented her with. On hand walks she is bold and inquisitive, and when presented with confounding moments like hoses being turned on or Weird Human Behavior, she boldly stares and often marches up to whatever the offending item is, human or otherwise.

Maybe you can see how I could get lulled into a false sense of security with my little namesake. Even as Rory tried on a half assed version of being spooky from hanging around Sheza, Sheza suddenly became grudgingly bolder about items and behavior that made her want to run away in grand terror–don’t get me wrong, she still embraces her true nature, as evidenced by Rory and I wearing our rubber mash pan hats together in the field while Sheza orbited us in disbelief. But the Rushcreek mellow was rubbing off on us all and I started assuming I had myself a real quiet nice little obedient filly on my hands.

In Mid July, I moved Rory into her own pasture, with adjoining fence lines to Desire and Blaze. Much like her human counterpart who once manipulated grade school seating charts to her liking, Rory re-seated herself into Desire’s pasture one morning, giving herself a grand hind leg scrape in the process. I tried to give her the benefit of the doubt that she was itching on the fence, panicked, and somehow ended up over into the next paddock, but forensic evidence and the measured look in this filly’s eye as she trotted experimental rushes at the fence line in the following days showed me that it was an entirely calculated effort. The hot fence went higher, and hotter. We moved on.

Recently, Mel and I discussed how Rory’s outwardly quiet and amiable attitude may allow her to get away with more than blowy Sheza does, and the potential for her to present me with new challenges with the very different head on her shoulders. Oh Mel, we are so wise!
step sisters in mischief 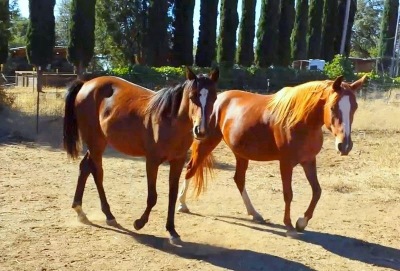 Yesterday I had a chance to do a quick hill workout from home on Scrappy, which was drama in and of itself. Long story short we got surrounded on a paved public road by 300+ lbs of aggressive dogs and in the seconds after I’d thrown everything I had at them and was panic-hoping Scrappy would start kicking, the owner finally called them off and apologized (gee, thanks). Mostly it was a salvageable ride, especially the part where Scrappy was a shit about heading home so he had to turn and trot back up the big hill–and he did so, without flagging! I actually got the impression I’ve been building some fitness in the mellow fellow.

Anyway I’d  gotten home, simmered down from my dog attack/hill ride and was distributing mashes back home, fillies last. I left their gate cracked behind me as I do, and with the assumption they’d eagerly be at my shoulder for the mashes as usual, started down the hill to their mash spot, only I heard rapid hoofbeats going the *other* way and turned to see Rory on a direct beeline across the yard, ducking the barely visible hot wire, and straight out the open gate toward the county road, with a car coming. I was already running as this unfolded but didn’t have a shot at cutting Rory off before she got the road until Sheza’s obvious uncertainty at this behavior–she stayed in the barnyard as Rory darted for the road–made Rory pause long enough for me to spring past her and shoo her back up the driveway. We have an auto gate and it would take too long to dismantle it to close it manually with the determined escape filly so all 3 of were in a run for the cross tie stalls–they because it’s where the goodies are, I because it’s where the gate clicker was. The three of reached it at approximately the same time, I snatched up the clicker, and we all three wheeled and had a dead heat foot race back toward the now (slooowwwwllyyy) closing gateway. I haven’t run that hard since high school track and I did in fact beat them down there. My husband and his friend arrived around the corner in time to shoo Rory back in the pasture (Sheza was clearly confused and wanted to be haltered immediately) and I dumped their mashes out to the chickens in a fine fuming redhead rage.
the culprits and the gate 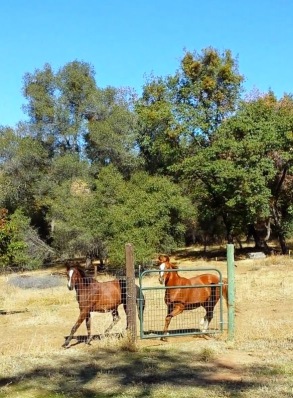 The escape was clearly Rory’s idea, and while Sheza bucked and goofed and headed right for her buddies as I would expect a newly minted young escapee to, Rory made a direct and concerted effort to get out the front gate, a gate she’d seen Scrappy and I ride out from and back to not long before. She also showed no concern that Sheza was haltered and led back to the pasture, deciding instead to adventure out alone in the yard until my husband and his friend shooed her back the right way.
I believe the young miss Aurora has put me on notice: Be Lax and Beware. I see a similar streak in Scrappy in that if you give him an inch (of sympathy, say) he’ll take a mile (my god, yes, I AM dying, we must quit immediately). Scrappy however has a strong sense of self preservation, and that’s something that I’m hoping Rory might embrace a bit more in the future.