If I have learned anything in the 12 years since I first rode in an AERC event it is this: pack everything, be prepared for everything, and most crucially, leave a corner of your coping brain available to engage when your plan goes completely sideways. Because it will. Inevitably, perhaps gloriously, and definitely whether you want it to or not.
The backstory and plan?
Attending a 3 day multiday ride a mere hour from my house. Scrappy and I were signed up for back to back 50 milers, looking to test our fitness with our first 100 miler on the docket for February. We’d had a frisky but still sensible completion at the Nevada Derby 50 in April, which told me I needed to play with saddle fit and get Scrappy working on the bit, a  bit, any bit, since he Hi-Ho Silvere’ed  through the hackamore I’d been riding him in since purchase. We spent May-November riding LSD miles and working in the round pen, and it was showing to the point where a friend riding him remarked on his change in attitude and body, admiring his recognition of half halts and proper carriage where previously he jutted his jaw and motored on his way how he liked. I felt like we had our shit together physically and mentally, I had back ups for my back up gear, copious rain gear for both of us for the storm predicated to roll in Friday night, a dry bed promised me in a friend’s horse trailer negating need for my tent–surely nothing could go too wrong? (somewhere, endurance elves are snickering..)
I even cleaned up my pinto poopaloosa a little before we left for camp

wide open spaces…scenic but not ideal as we discover.. 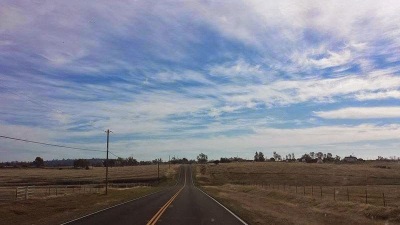 Ride camp was literally an hour away and a place that I’ve trained at fairly often if not actually attended rides at, so it didn’t take long to find the spot buddy J had saved us and settle in.
ET phone home from on high 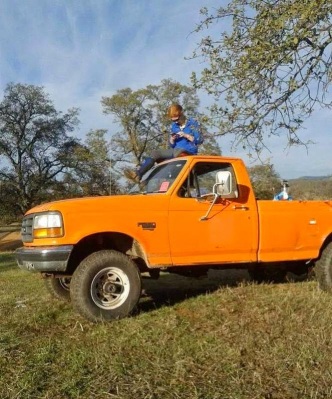 cozy bunk in back of J’s trailer 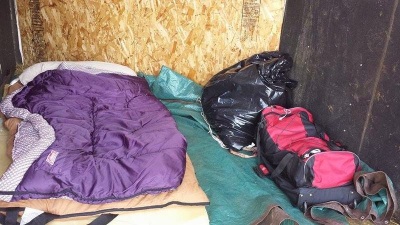 J bedazzling her pony, as one does!

I’m sad over the lack of photo evidence of our vet in trot out, as the trot out has been one of our projects over the summer. When I bought Scrappy in summer of 2013 he had already done a few rides including a 100 miler, and was entirely unimpressed and mostly unwilling to Trot Out as needed for vet checks, resulting in me dragging him like a dead thing at our first ride together. Mortifying and unacceptable, so we practice and at our last 50 we managed 2/4 decent trot outs. We’ve practiced literally every time I’ve handled him all summer and his barefoot trot out on this Friday afternoon was the bees knees, though I didn’t exactly see it, I could hear and feel it, and I heard others say he floated.Why spend a paragraph on a 20 second occurrence? Because small victories matter, especially when the larger picture didn’t get painted exactly as the human artist intended.
nomming a thanksgiving potluck hanging out with friends around the fire in ride
camp was a great way to spend the holiday! 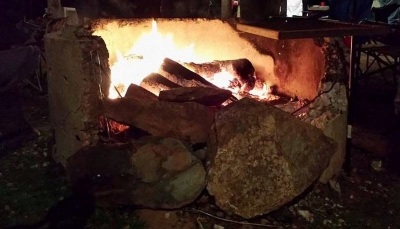 Friday morning tack up was uneventful, Scrappy moved around a little but was pretty cool. I was concerned about getting J sent out in my spare Renegades as she was having boot issues, but otherwise all seemed well.
Dr. Jekyll chilling in his office

J and I headed for the starting area a little late and Scrappy stood politely at a kindly stranger’s offered mounting block and off we walked, with impulsion but still operating in Dr. Jekyll mode. Despite being a bit late there were a couple of horses visible heading out into the flat open spaces and a couple more getting on trail behind us. If you hear increasingly loud whispers of trouble!  in your head when you read that last sentence, you probably know where this story is headed and may well have been there/done that yourself.

I do believe that he continued his bold polite walk for all 3 steps after crossing the official start line. Bold walk became shuffling trot which turned into excited surge, stepballchange, canter in place, stepballchange, undetermined gait sideways, then everyone’s favorite Jot (jig trot!)–wait hey, there’s a buck! No rearing to be had since we had lateral control and I was already serpentine-ing and half halting, to no avail.  I can really speed up this ride story right now if I tell you that Scrappy and I did some version of that, plus circling and hand walking (and a lot of swearing) for the next 27 miles straight. If you’re surprised there’s still a few decent trail photos (or that I managed to eat or drink anything), let me assure you that only my years as a multitasking-to-survive trail guide allowed me to. The Dr. was out, Mr. Hyde was in residence,  and the little human on board was effectually relegated to nonessential annoying accouterment. 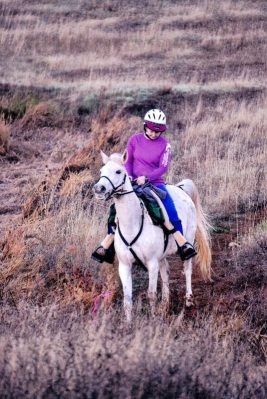 besides being a jackass about it, Scrappy was moving great and did all the
important EDPP stuff just wonderfully, I was feeling great and non-nauseous myself. Eventually we’ll put that all together into a Finish! 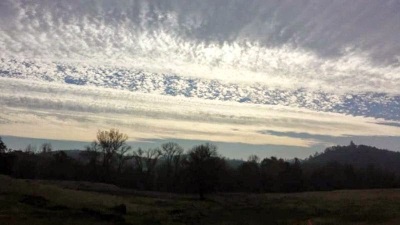 The loop was every inch of 27 miles as promised and I was feeling it by the time we were climbing back up into camp (just one short steep hill, more of those would have been useful!). Scrappy hadn’t flagged even a little bit and somewhere deep down a small part of me was impressed at his fitness. But mostly just extra, super, extraordinarily irritated. No one likes their horse checking out on them for even 1 mile let alone an entire LD distance, and I was concerned about how quickly he was moving as he rarely exhibits a power trot at home, let alone for MILES. We do train at the canter so I threw some of that in to try to switch up/save his muscles, as well as hand walking when able. I had a new problem of somehow jamming my right big toe so painfully riding the Scrappy rocket that I wasn’t all that able to walk very far at a time, actually, which was a lovely bonus. In the saddle I was focusing on switching diagonals and not curling into a defensive ball as he roared along (yes, he was THAT strong, I know my friends who ride with sleepy Scrappy at home are like whaaaa, really?).

once you leave on one long loop, you don’t get to run back to the
trailer for gloves, real bit, etc. so…OWW 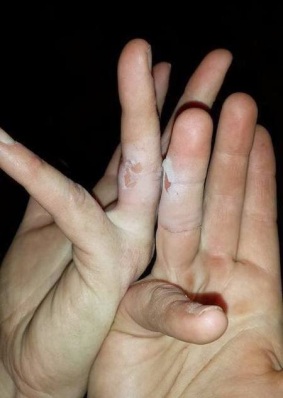 Despite his frisky fresh performance and nearly dragging me into camp, Scrappy pulsed in immediately in the 40s and after drinking and a few hay bites we vetted in with the same vet as the day before. I cued him up for our trot out expecting something at the very least decent, after all I’d just about died riding his rather impressive power trot for nearly 30 miles and his vet in trot had been lovely–but what I got was the sound of Scrappy apparently falling over himself (I was being good and not looking at him but I sure heard it!), recovering, and then trotting out NQR. Not lame, but NQR, something about the left front or hind maybe, the vet thought. I felt his rump under the cooler and immediately felt how knotted tight his power trotting muscles were. It was subtle enough in gait that the vet said continuing was up to me and to come back at the end of the hold if I wanted a peace of mind recheck, but I knew right then and there that I was going to Rider Option pull us. In the same instant I knew that it would be a bad training decision, as Scrappy was essentially a raging shite for an LD and then would get to quit, but my gut told me that physically the risk wasn’t worth it. With his complete lack of brain, my terrorized hands and foot, 28 miles of the same flat open terrain to go and a week long rain storm rolling in that night, I felt no need or desire to push a NQR to something else in search of a training win. Feeling the knots in his hindquarter muscles, shaking my head, I handed in my vet card that read all 40s pulses and all As, untacked, and that was that.

Dr. Jekyll was back & open for sympathy visiting hours as I massaged his hindquarters & hung out with other riders who’s days had gone sideways.
Cute, contrite, quiet, not a whisper of the terror he had been. Oh Scrappy.

So what went “wrong” you ask? Let’s recap:

1.Scrappy now has around 400 AERC miles (made up of LDs,50s, and 1 100) with a variety of riders (3 different people competed on him previous to my purchase) and has gotten some sort of (inconsistent) notion about what this “trot for a while, get checked, do some more” thing is all about

2. Scrappy is on his 3rd year of a few rides and lots of LSD miles, so he’s pretty darn fit despite his sleepy cow eyed exterior

3. Aurora needs to stop thinking that because Scrappy is quiet for conditioning and used to be quiet on the first few e-rides we did, he’ll be that way again. That is, I DID attempt to do my homework over summer, working on control, proper body and bit carriage, **but all that jazz done by yourself or with one friend just doesn’t translate to the herd on trail scenario.**

4.Snaffle bits are for home training (for now) and merrily starting the ride in any sort of group, or even with a partner, is a bad idea (for now). Scrappy had a combination of buddy sour and camp sour going on mentally it seemed. Even when trotting with J and Shiner he bugled back to camp..lol.

Ready to go home haul home Friday pm
I think we are both ambivalent on feelings for each other in this pic, I just fake it better..

So there you have it. Best laid plans gone awry and a totally different outcome than what we’d trained and planned all summer for, but lessons learned and horse and human returned home in overall good health which, in this crazy game of life and endurance, is something to give thanks for indeed.