Kenny and I jumped aboard adventure pal W’s trailer last Friday morning for a journey to the new high desert multi-day endurance ride Torre Creek in north eastern Nevada. Kenny and I’s last endurance ride (complete with exciting travel issues) was in September and we had had truly minimal saddle time since the new year between life and the new job; that coupled with ride camp at 6500 ft elevation (we live at about 1200 ft) with climbs promised had me already weighing the idea of changing my planned 50 to an LD once or twice in the week leading up to the event.

Morning of departure, the weather forecast was dire and we had a long (7 hr) drive ahead of us, but a friend of W’s was putting the ride on and we had long ago committed to attending. Feeling as discombobulated as one does after not going to a ride in ages, and then not in your own rig, I scrabbled together what I thought we would need for an “arrive-Friday, ride-Saturday, home-Sunday” weekend and off we set (note to self: always pack more hay than you think you should).

getting up into that green+snowy high desert, wowee

An aside: If you have followed this blog at all then you may know that trucks have a tendency to misbehave around me. Here I would like to record a BIG shout out to W’s 1997 Ford, who laid to rest all past transgressions by charging through the 14+ hours of travel like a fresh faced youth, apparently unphased by being backed into at ride camp mid weekend. Thank you, Ford!

Suffice to say that we arrived at ride camp as planned late afternoon on Friday–and that’s about where “as planned” ended for the weekend! Things got real quite quickly, as Kenny has barely made his opening tour of the grounds and taken in his ride camp spot before it started hailing– with conviction.

Hmm, where have we come, Human?

W and I lay in the uninsulated steel trailer Friday night in all of our layers listening to the storms blow through and contemplated our life choices as the roof gently dripped on us; early Saturday morning we had an RM query if we would like to volunteer that day and ride on Sunday, as the weather looked better Sunday (and looked impossible to get back home over Donner Pass on Sunday, for that matter). That would push our return home to Monday so options were weighed, but seems to me that if the ride manager suggests something on their home ground, you go for it, and we did.

Saturday we spent volunteering. Paperwork, campsite checking, we moved camp spots when W’s rig became the rescue trailer, and I spent 5 or 6 hours outside working the Finish line. The storms continued to blow through in alternates of rain, hail, and wind, and it was a true blessing to have the large heated fairgrounds hall as a clubhouse to retreat to–indoor bathrooms and all! 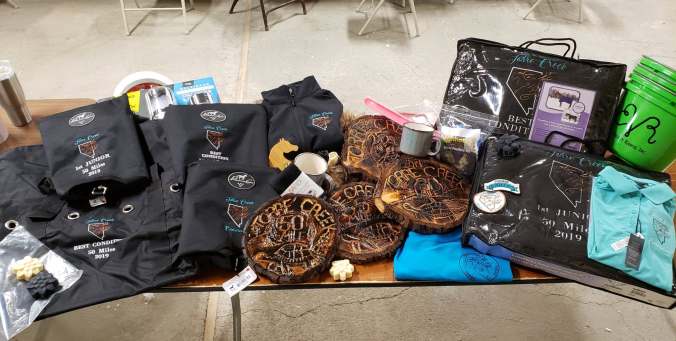 just some of the fabulous awards at Torre Creek! My husband made the wooden turtle awards 🙂 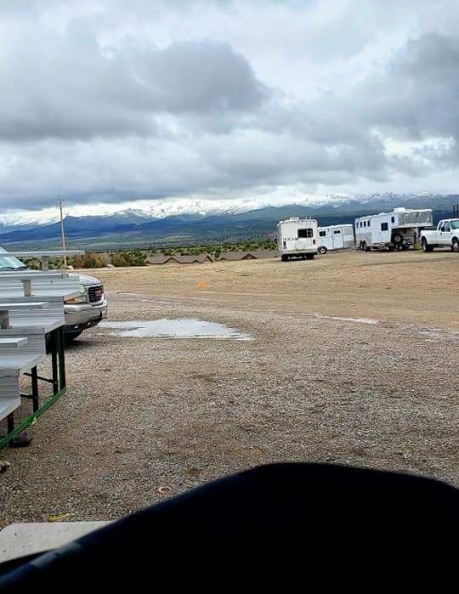 not a bad view from working the Finish line!

Kenny alternately took in ride camp smugly and glared sullenly at me during storms, while I tried not to feel too bad for dragging him about in such terrible weather. His girlfriend for the weekend was the RM’s chestnut Arabian mare, approved.

Saturday evening as everyone reheated themselves indoors, W encountered a junior who had come to camp only to find her horse lame upon arrival. W offered to pay a ride entry if the junior could find a horse and in no time a horse was offered up for Sunday’s 25 miler. All that was needed now was a sponsor to ride with, and W and I readily agreed to escort her. The weather had still not let up in the least and we all felt quite A-ok with a 25 miler at that point!

ride camp (behind me) sunset Saturday

It was only raining lightly Sunday morning as we bundled up for the LD and had let up again by trail open. Junior B on her borrowed steed, W on the RM’s mare, and Kenny and I set off together but within a few miles W made the call to turn back. B and I continued on and had 4 out of 5 hours of solid weather on some truly beautiful high desert trails. 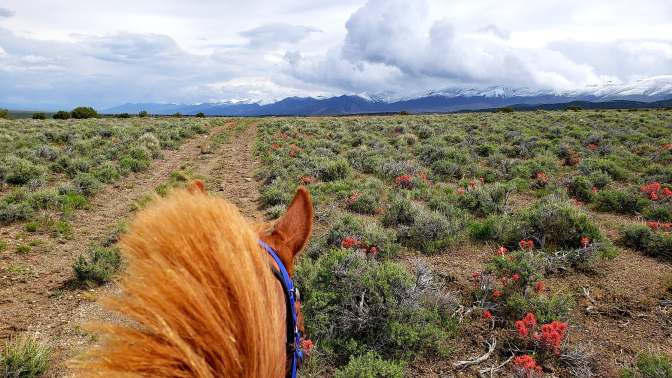 Our two snarky little chestnut geldings cruised well together and we enjoyed mostly good footing despite what had and did fall from the sky. Kenny trucked it barefoot as it his wont and enjoyed the bunches of green grass and plentiful water along the trail.

B leading the way

We had a 30 minute hold out, complete with hot dogs, hamburgers, and all the fixings. There is truly nothing so delicious as a hot something on trail mid ride and ride management had also provided hay and mashes–there was even a bonfire! 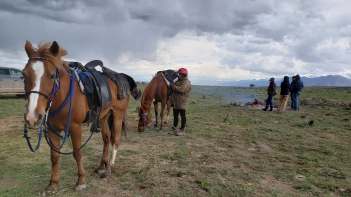 The promised next storm was gathering quickly as our Out time approached. I had Kenny walk between bites of alfalfa as he was getting a little shivery even under his rump rug and I was quite happy to hear it was time to get moving again. We zipped up all our available layers and took to the trail back for camp, enjoying another 20 or so minutes of Totally Doable before it got Really Nasty.

the phone wasn’t out for a while after this!

I had never ridden in snail before, never even heard of it before this weekend, but here it was. Snail in regards to weather is said to be a mix of snow, rain, and hail. And yes, yes it is. When delivered at speed sideways, it makes for quite a uniquely uncomfortable experience! I did a good job on Michelin-man layering my top half, which remained fairly comfortable but my bottom half and hands  were immediately soaked cold, like painful cold, while winds buffeted Kenny and Fritz who protected their eyes as best they could and trooped down through the storm.

Fortunately, with a few miles left to go, the storm finished with us and we trotted and cantered our way on still very doable footing in to a 1:30 pm finish, 30 minutes to spare as intended.

In the end B and I were last and next to last in the LD so I made sure she took home the super fun turtle awards, which included one of the decorative wooden awards made by my husband. ❤

B and hardworking RMs!

It cannot be overstated how hard the ride managers (and vets & volunteers) worked, re routing the trails every day and dealing with all of the excitement that can come from managing a ride, and a first time multi-day ride at that. Thank you all! The fairgrounds venue was solid, the heated building with bathrooms a miracle, and the countryside truly gorgeous. The weather was not at all the norm (and is on it’s way to setting a rainfall historical record) and rumor is that the ride managers intend to go for it again next year. I encourage folks to pack their warm clothes and attend!

congratulations and so nice to meet you, B!

After one more night of solid rain and hail we packed up and made it back home (on a much snowier drive than previously) by Monday evening. Kenny took it all in stride as usual and returned to his mares with style.

In the end this made for a solid conditioning ride for Kenny and I, after this we will choose a 50 miler to knock out this season for our continued Decade Team goal. Til next time!