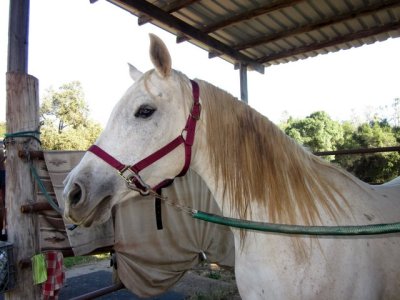 Pretty momma D
Well shoot. I spent the afternoon cleaning paddocks and grooming the muddy/dusty/hairy beasts formerly known as my horses. I pulled Desire and then Sheza after she quieted down and tried on their new waterproof winter turnout blankets as well. Desire’s bright purple 69″ blanket fits perfectly which was a relief as she measured exactly 70″ but the 72 I had was just slightly too big and let in water at the wither area which caused slight rain rot last winter. I decided to go with the 69″ inch even though they usually say round up in blanket size. Glad I did as the blanket fits well and Desire looks great in the color. 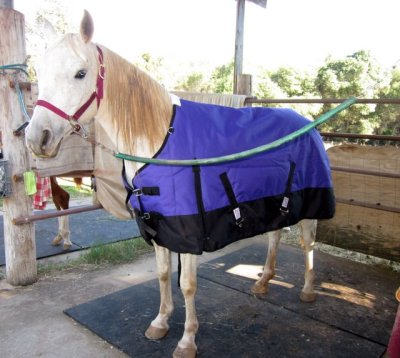 Unfortunately I couldn’t get my camera to capture the true purple of it but oh well. Sheza’s blanket, on the other, looks like the part of the movie Tommy Boy where Chris Farley plays “fat guy in a little coat” Maybe not everyone can call up this movie reference in their minds but its a favorite film of my brother and I and its all I could think of when I saw Sheza in her blanket: 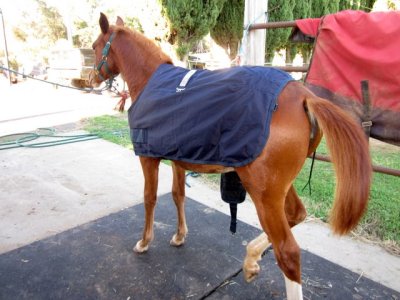 There’s rather a lot of Large foal still hanging out! 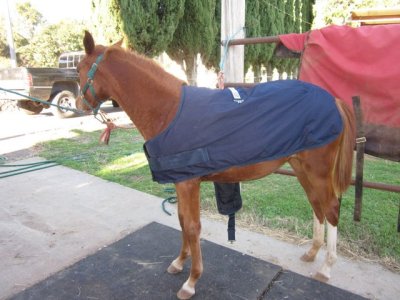 So though we had a very nice desensitizing lesson and progressed from wild eyed panic at the sight and shhing sound of the blanket to wearing said blanket in about 4 minutes, it doesn’t fit her at ALL. I’ll be mailing it back for…a pony size or something? They don’t make the foal blankets any bigger. Kind of annoying but oh well.

Last but not least into the cross ties for grooming was Mr. Blaze, who is keeping himself and the mini Napoleon quite slim and trim with his endless mini herding fun. Since I introduced slivers of the awesome locally grown alfalfa I scored recently into meal times Blaze has changed his push-over tune and is now herding and cutting and terrorizing the mini horse to his heart’s content, just as long as the mini stays away from HIS alfalfa all is well. Actually not really, I’ve noticed Blaze randomly running the mini up and down the hill when no hay is around either. They are together in our biggest pasture that has the arena inside and they run laps down the hill, around the arena, and back up. The mini actually looks good from losing a few pounds due to this exercise and Blaze hasn’t turned back into a hippo which is nice since he has been off work for almost a month now. Can’t wait for that saddle to turn up and get him back on the trail–he clearly has energy to burn! 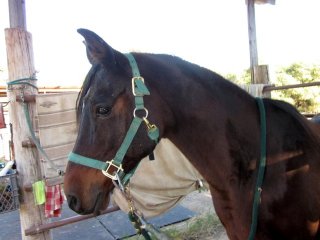 Join 674 other followers
Whiskeytown Mess Around
Starlight Lane Farm
Trails (and Trials)
Haiku Farm
It seemed like a good idea at the time
Dr. Mel Newton