This morning miss D and I headed to the lake for a solo ride. We hadn’t ridden there on our own for a while and I wanted to do a brisk 15 miles to see what our timing was looking like. Our first 2012 AERC ride is almost here! I wanted to be sure we could easily do 15 miles in less than three hours. And let’s face it, I had a bit of a need for speed in general. I had a serious case of why walk if you can trot going on and let’s just say I satisfied it today. 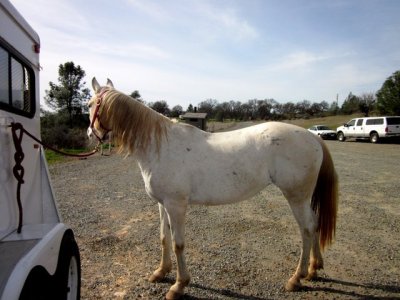 Can you tell what was covered by a blanket? White framed in dirt..
I decided to do the short horse camp loop first, since there were no other trailers for once and I could safely speed on the trails. The horse camp loop is the one that EVERYONE rides at, even when there are 12 rigs in the parking lot everyone will just crowd onto that one loop. It’s pretty darn funny. But I do appreciate having the trails heading the other way always to ourselves! Anyhoo we had a speedy 6ish miles on that loop, pretty much trotting the whole time except for a couple short necessary walks crossing the road and such. Desire tanked up at the orchard picnic spot.

She is  a champ drinker

Micro Nap while the ears keep watch
Towards the end of the loop I saw another endurance buddy out walking with her daughter and grand kids, leading her grand daughter on her elderly Arabian. She lives in a gorgeous house just off the lake trails (so jealous of her access) and has a Mustang/Arab filly just a few weeks younger than Sheza. It was nice to see her and hear I would be seeing her and her Foxtrotter at the Whiskeytown Chaser ride in April.
Back on the trail Desire and I flew across the top of the short dam in a big booming trot, back toward the trailer, and trotted right on by the parking lot without hesitation and on toward the Visitor Center at the top of the ridge. I had noticed a couple additional horse trailers in the lot as we trotted by and saw a ginormous fresh horse poop on the trail up the hill so I was looking out for other riders as we neared the top. Sure enough we came around a corner at a walk and startled the bejeezus out of a big roan ambling along with another horse in front of him. The riders said they were slow poking it (yah think! They were riding tanks!), pulled off of the trail for me and as I rode by asked if I was preparing for an endurance race. I said yep and we wished each other a good ride. It was pretty funny when they asked because my immediate mental reaction was “how could they tell?” and then remembered I was wearing tights, helmet, and running sneakers and riding an Arabian with it’s tail to the sky in bright blue and purple tack…yeaaahhhh, guess that was a no brainer.

The weather kind of sucked! It was relatively warm up at our house this morning and the sun was just starting to come out when I left around 9:30, so I figured it would turn into a nice sunny day. Well that was not to be and it ended up pretty much cloudy and chilly, but also kind of humid. Trotting I was sweating sweating sweating and then as soon as we slowed down I felt chilled to the bone. Desire sucked down more water at the Visitor Center trough at the top of the hill and I decided to go a bit further to try to get to 15 miles.

I have to admit I was losing motivation a little as it was quite chilly at the top of the hill and my nose was running like crazy. The pollen was ridiculous today, I can’t believe how much crap is blooming already. I’m also basically over my cold but for some reason still have a runny nose (especially at speed, hehe). We only went about a mile further, just out to where we could look out over Oroville Dam and concede that it was, indeed, a grey crappy day.

We were at 10 miles when we turned around and in the end were at 14 miles in 2 hours and 30 minutes. I figure that means we can certainly do 15 miles in under 3 hours, and be fine on time for a 30. I never really have a ton of trouble making time in actual rides (except for Whiskeytown, coz I walked the whole time due to rocks) but for some reason when I am breaking down the math and looking at my time and miles on training rides all I can think is: panic and how is it possible to get all the miles done in time?!!? It’s some sort of mind meld of my own creation.

See them nostrils? That’s why she flies 😉
But anyway we worked 14 miles at speed today and tackled a couple of decent hills, Desire drank 3 times and grazed heartily, and was still relatively fresh when we got back to the trailer. She was a little disturbed that we had re-passed the pokey trail horses at the Visitor Center up top; when we got back she kept looking up toward the trail and straining to hear so she wasn’t eating her hay at the trailer and when I tried walking her to graze she would only snatch a bite of grass and then freeze to listen again without chewing. She had had a nice long grazing session without her bit on the hill above the trailers though so I wasn’t too bothered.

Zero boot rubs and an even sweat mark. WATAH!!

Lately she has been hopping right into the trailer without any fuss, on the way home she thought about being a brat and swinging herself sideways when I asked her to load but I just pointed her straight at it firmly again and she hopped in.

I didn’t bathe her today, though it actually ended up warmer up at our house than it was at the lake. Just a good grooming and back to her paddock for some warm mash and extra hay.

My husband is bringing home KFC and I can’t wait!!