Today I finally tried a loop out of Bangor that I’ve been wanting to try for a while. It takes off from Bangor proper, such as it is, loops out down some dirt roads past a good friend’s house, and back around to the main road which drops back into Bangor. I figured it was going to be about 9 or 10 miles worth of riding with a good, long, steep hill to conquer towards the end. Turns out from my parking spot out and back was exactly 10 miles, and we did it in 1 hr 50 minutes.

I got the okay from the Bangor feed store/boarding ranch owners to park in their barn area, which was easy, convenient, and kept me from having to worry about my rig. I could have parked in the giant lot at the Bangor public park next door but there is a rather sketchy looking bunch that hangs out there and I just felt better leaving my rig at the barn owner’s place The owners had told me where to park so I was out of the way and warned me that the trainers working out of there weren’t the friendliest (Lol) so I was prepared to be stared at like an intruder, and they did just that, but I just smiled and said I was a friend of the owners and kept to myself.

I somehow forgot the terrifying emu that lives on the corner of the boarding ranch’s property, but Desire quickly reminded me of it as we headed out! No harm done, we crossed the park’s parking lot and headed out down the road. 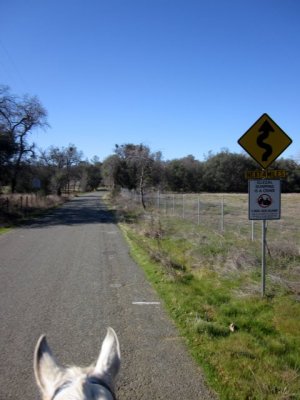 My husband and I took a quick spin down this road last night after the movies to see just how the long the pavement lasted, which kept me from the “ohmygodwillthisevereenddd” feeling I usually have about riding on pavement. All told it was just about 2 miles from my parking spot, down the paved road, and to where the dirt began. Not too bad! We got barked at by multiple dogs at every house we passed but saw some very cheery people out in their yards along the way who called hellos and said how pretty Desire was.

Once the road turned to dirt we had a nice 2+ mi trot/canter session, no cars in sight, just swinging along a quiet dirt road with fields and oak trees on each side, the sun shining and not a cloud in the sky. It was a BLAST!! Desire transitions from trot to canter and back so incredibly smoothly, she is just so much darn fun to ride.

We got to our first intersection at just over 4 miles and turned right onto Dunstone Road, which leads past my friend’s house and intersects the other road which would take us back to the highway. 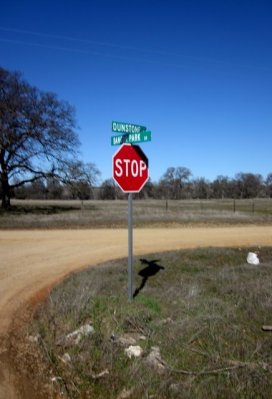 I had actually done part of this ride 3 years ago with my first riding buddy I ever met here, but we had done it in high summer and it was baking hot on the unshaded dirt roads and no fun. We’d parked at one of her friend’s houses out on the dirt road I was riding on and just gone out and back, so I hadn’t ridden the whole loop but at least knew more or less where I was the whole time. Anyhoo, we had another mile+ trot session and then slowed down to say hello to a very curious mule. 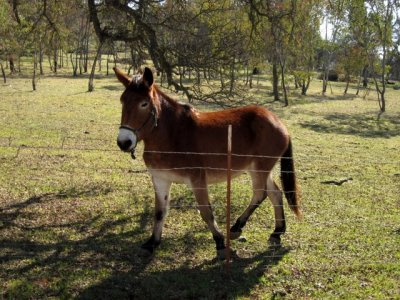 She trotted the fence line following us, her horse pasture mates weren’t so interested

A WTF R U moment

As we were hanging out staring at the mule I saw white vinyl fencing through the trees and suddenly realized we were almost to my friend, L’s, house and that the mule was the one she often talks about–seems the mule likes to escape and wander the neighborhood upon occasion. I texted and called L to see if she was home, no response, but I decided to ride up to the gate and set off the dog alarm and see if anyone was around. 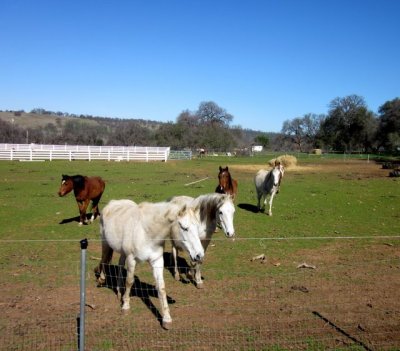 Some of L’s herd of Arabs coming to say hullo

When I rode up to the gate and saw the herd of dachshunds come flying toward me barking I knew L had to be home. They have big dogs too but I knew if the littles were out they must be home. L is the person I got my dachshund Wilbur from, and was also the person that our entertaining mini horse, El Bandito, came from.  She has a wonderful zoo of creatures and is a lot of fun herself.

There was no sign of L at first but I just hung out at the gate letting Desire graze and the dogs bark and after a few minutes sure enough she appeared! We hung out and chatted for probably 45 minutes and Desire discovered something to be VERY SCARED of. That thing being Chuck, the big handsome brown domestic tom turkey that lives at L’s. He is very friendly and follows humans around with his tail on displaying, thrumming and drumming and gobbling. Well Desire found that whole situation quite disconcerting and actually was the most spooked and alarmed by him as I’ve ever seen her. As he came thrumming and drumming toward the gate she threw it in reverse and was back pedaling and snorting as quickly as she could do both. I’m going to confess that was about my reaction the first time I met Chuck! He is a big bird and looks quite imposing all spread out in his glory, but he’s very friendly. L picked him up and held him and I convinced Desire to walk back up to the gate and sniff him all over, but once he was back on the ground and marching around again she kept her eye on him and kept snorting every few minutes. So apparently I need to fill her paddock with turkeys and hunks of wood, as they seem to be her least favorite things in the world! L gave us a handful of Hershey kisses for the road which was awesome, yum!

Hitting the road again, with chocolate from our pit stop 🙂

Maybe 1/4 mile past L’s was our turn onto Avacado road which would take us up the big hill and back to the highway. 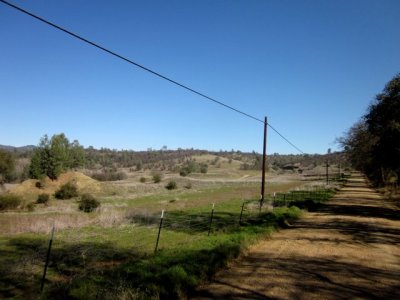 Heading for the big hill

As we headed for the hill, Desire found herself with a case of WeMustTurnAround-itis, apparently convinced that this was an out and back and not a loop ride. She just KNEW she knew best and actually tried to fully turn around a couple of times, lol. She must have known what was coming. We tackled the hill at a slow trot and she actually trotted right to the top with no issue! I was planning to trot some, walk some, trot some, depending on how steep it actually was riding it (everything feels different in a car), but she just trucked away at a steady little trot up, up, up.

Cows on the climb

There was a cow outside the fence near the top and we just had to stop and take a gander at it. The few times I’ve seen cows while on Desire she has acted like they’re demons from hell but for some reason she wasn’t very impressed by this loose cow and stopped right near it to gaze at some horses whinnying way out across the fields. Maybe she was too tired to fear cow, muahahhaha! 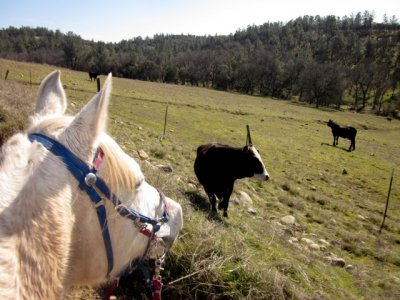 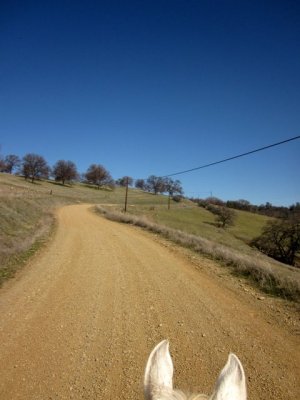 We had another mile+ trot once we reached the summit and just as we got back to pavement and the highway we encountered our first cars of the entire ride. There were kids in the back seat of the SUV that passed us and they were smiling and waving furiously as they went by.

Back to the highway

I jumped off Desire when we got to the stop sign as we had to walk along the road back down to the boarding ranch and it wasn’t a stretch I felt safe riding. The stop sign is at the summit of another hill and people tend to fly down the backside of it toward Bangor town, so hand walking felt safest.

Here’s what we were walking along for about a half mile back down to the boarding ranch:

Lots of cars went by in that stretch and some slowed down, others didn’t. A couple of motorcycles roared past us but Desire didn’t even flick an ear, just strode along behind me like a trooper. 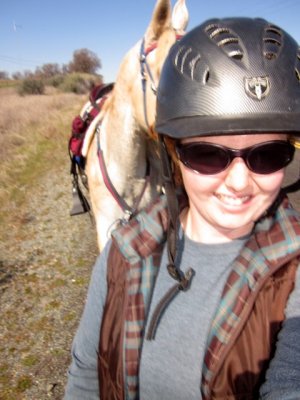 Walking along the road

Below is the beginning of the boarding ranch property again, and this handsome guy coming toward the camera actually lived at our place for the first 5 months after we bought it. He was a client horse of the trainer we bought the place from and we let her keep her horses at the place until she could figure out another spot. Unfortunately his mother, also boarding at our house at the time, came down with and succumbed to a nasty colic a few months after we moved in. It was a really sad thing, I saw her pawing at dinner time and called the trainer right away and the trainer and I stayed up all that night walking and trying to save the mare but she was just too far gone. Anyway her son now lives at the boarding stable in this lovely big paddock:

Below is Desire grazing right next to the scary emu’s pen back at the boarding barn. Apparently after her close encounters with the Chuck turkey kind, she is no longer impressed by emus. We actually startled the bird when we walked up, it was curled up sleeping on the ground and jumped up and ran away when we came around the corner, so maybe Desire felt she had told it who was boss and felt the grass was safe even against the fence. Or maybe she was just tired and hungry!

NO boot rubs. I left all gaiters slightly loose and slicked her legs and baby powdered her boots and there wasn’t a rub in sight! Also, we didn’t cross any water today, and I’m pretty convinced wet soggy boots and gaiters contribute to the rubbing.

Saddle sweat mark was good, slight dry spot at the shoulder but even otherwise and not sensitive to palpitation at all.

“Stop taking pictures, I’m hungry, you’re annoying, take me home”
It was an easy 5 mile haul back to the house, ahhh love that. Verging on too cold to hose down miss D but she was such a horrendous sweaty mess I just had to, albeit with warm water. She got a warm mash and some extra hay and I hastened inside to hit up the Chinese food left overs from last night.
It was a fun loop, lots of good trotting and cantering, a fun visit with L, and a good solid hill at the end. I definitely think I’ll add it to my trail arsenal, since I can only ride Lake Oroville so many times a week, Lol.
3 1/2 weeks til Rides of March!

One thought on “A New Loop”