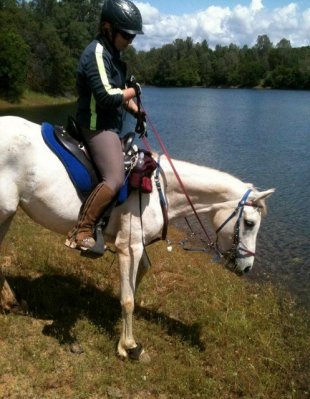 There’s simply nothing like a squinty eyed, Elvis-lip curling, ear pinning, squealy mare! God bless em they drive me nuts and yet they’re always my favorites. Desire wasn’t quite that bad today but she did pull out a new squealy mare trick that wasn’t appreciated or encouraged by me but was *kinda* funny in that eye-roll-inducing sort of way.

We joined D and her gelding Bob at the lake again this morning, and a friend of her’s I’d never met, C, also joined us with her very cute gelding Jasper. Jasper was rescue bound last year but fortunately D got him to C instead and they seem like a great match. Jasper hasn’t had a lot of trail time but really seemed to enjoy himself today. D’s Bob was also a “salvaged” horse and has really turned into a cool little gelding. He is the quintessential cute, compact QH in build and proved himself to be a little competitor on the trails today.

D on Bob on the left, C on Jasper on the right: 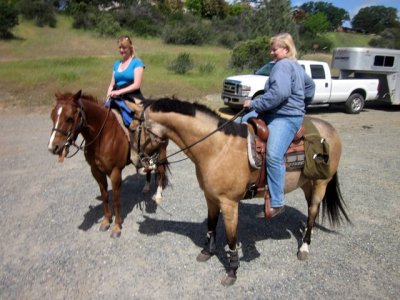 The weather was weird and unsettled this morning, gusty wind and very chilly when the sun was behind the clouds. You can see my windblown lady in her Gloves before I tacked up:

We started out on the 6ish mile horse camp loop since it’s the friendlier ground for a mellow trail ride. Desire walks like WOW and I spent most of the first loop out in front with the other’s trotting to catch up or Desire stopping for grass breaks til they caught up. Whenever they caught up and got right behind us with the potential threat of passing us (at least in Desire’s kooky mind) she would do her usual hairy eyeball and ear swivel but on top of that, today she also squealed each time! Total witchy brat! She has never done that before and I wasn’t having any of it. Towards the end of the loop we realized it was mostly Bob that was getting the squeals, as he is also a front-runner in attitude and was being cranky about being behind. Desire behaves very differently from horse to horse and apparently she was feeling the heat from Bob because the squeal thing is a new level! She can be quite mellow and even loving if a horse is non threatening, even another mare, as she and N’s mare Willow are quite good buddies. Desire is always tenser and more competitive with C’s athletic gelding Sonny though she has never pulled the squeal trick around him. Mares just never stop surprising us I guess! 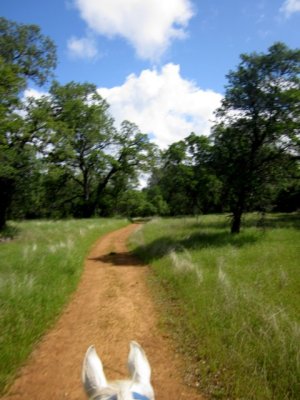 Had a ride photographer moment and caught D and C both coming around the same corner:

Aww, Bob is such a cute little QH man: 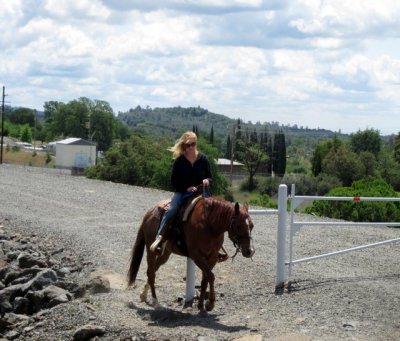 We rode down to the water for some drinking/splashing/grazing: 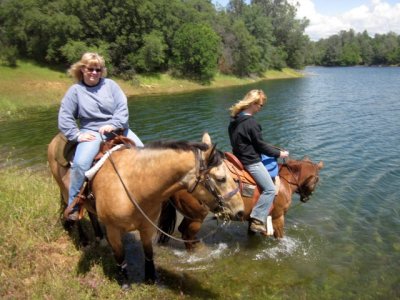 We finished up the horse camp loop and ran into my friend, B, the horse trainer gal we bought our property from, back at the parking lot. She was heading out for a ride ponying her Arab the way we had just come from. C’s Jasper hadn’t had a lot of trail time as I mentioned and she had a longer drive home than us so C loaded up and headed out; D and I took little a little break at the trailers and then got back on the horses and headed out to climb the ridge to the visitor center. Desire’s snotty behavior had left something to be, well, desired, and D is always game for more riding so away we went.

Desire (alertly) chilling before the second part of the ride: 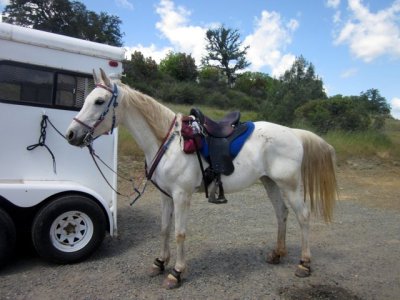 D and I trotted up the long hill to the visitor center and decided to call it at a day at the water trough at the top, Bob was finally looking tuckered out after the long trotting climb–not bad for a QH!–and
Desire had been behaving better–besides, the humans were hungry! We chatted and were riding side by side on the way back down the hill, there was some serious eye balling and walking races going on between the two horses but they *did* go side by side on fairly narrow trails and the squealing had almost entirely subsided.

All in all we did almost 13 miles in 3 hrs and 40 minutes, a nice relaxed ride on what turned out to be a beautiful day. D and I stopped for a quick lunch on the way home and the horses were quiet and chomping away at their hay in their respective trailers which was nice. Note to self: don’t be too lazy to reopen the annoying, hard-to-open trailer tack door and end up throwing the sweaty saddle pad in the truck cab to cook while eating lunch..it smelled a real treat in there when I got in the truck to drive home!

Cleaning up when I got home and noticed my bridles and breast collars were looking a little grubby..Nothing like washing your tack, boy, it’s arduous 😉

Good luck to Funder and Dixie  at Washoe this weekend, they’ll be riding in the 50 on Sunday! Happy trails to all, should be a beautiful weekend for horse play.