I noticed a seemingly sudden saddle fit issue at the Cache Creek Ridge Ride 50 miler the weekend before last, and when the trimmer came out the following Tuesday we could see that Desire wouldn’t/couldn’t square up and one hip was slightly higher than the other! I sent out the help call for recommendations on a local chiropractor and got many responses in favor of Dr. Sue Thompson out of Paradise, CA.

I called her office this morning around 7 planning on leaving a message and scheduling later in the week but happened to catch her secretary/helper who said Dr. Sue would be passing through Bangor on her way home this evening and could stop by. Lucked out there, even got a discount on the barn call out fee since she was passing through the area.
She made it out around 6:30 pm, fortunately it stays light til almost 9 already and she used almost all the remaining daylight working on Desire and Blaze. Desire was *very* out of whack–you know me and my scientific terms..really though, her right hip was higher than her left, you could see her rib cage was slightly canted to one side and the terrible job she was doing at squaring up when my trimmer and I were looking at her last week was apparently due to the fact that she couldn’t square up the way she was currently going. Dr. Sue found blockages in her neck and vertebrae and all the way back to her rump, and Desire wasn’t shy about showing how things felt. After her neck was adjusted correctly she kept turning her head each direction all the way back as if “oh hey, look what I can do!” It was obvious to see that she was turning it comfortably, without needing to tilt the head at all to accommodate as she had been doing before Dr. Sue started. She wrinkled her nose a lot as she does, and pinned her ears a few times when the spots were really sore, but almost always licked and chewed and turned to look at Dr. Sue with her ears up after she had released the spot. She was really quite good about it, she wasn’t tap dancing and mostly stood quite quietly even when she had her Snarky Face on. One of the releases in her vertebrae was so intense that you could feel the rush of heat of blood flow afterwards, it was remarkable. Desire got sleepy and almost took a nap while Dr. Sue was notating her work, and I am confident she’ll be much the better for it. Recommendation is to give her a few days, then work her lightly in the round pen, and slowly build back up to saddle time in the next few weeks before Hat Creek. Dr. Sue said that she adjusted so much that it would be an almost new way of going for Desire and she needed time to figure it and stretch into it.  Makes sense to me, I don’t do a lot of miles between rides with her anyway and this is certainly more important for her than miles, at the moment.
Blaze only had a couple of vertebrae and a shoulder point out of whack, and he was his usual charming little self so that by the end Dr. Sue kept enthusing about what a cool little horse he is. No doubt there! He has been here 3 years as of yesterday and is the sweetest little gem, who woulda thought the little horse for sale on Craigslist that I eyed for months would turn out to be such an awesome partner for any and everything.
Here he is the day he came home: 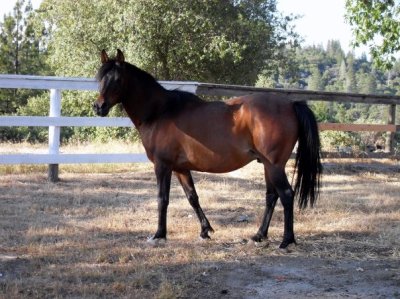 You can see he has that big barrel and “hay belly” appearance, even then. Dr. Sue commented on him losing some lbs and I patiently explained that is how he’s built, even fit for endurance that’s how he looks. My vet who has known him for a few years now is the only one who sees his build and appreciated that he was in great weight when she came to do shots a couple of months ago.
Here he is before a trail ride last month: 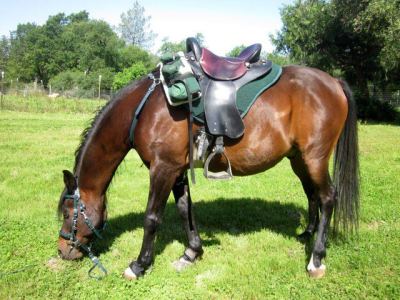 When I put them away Blaze powered out of the cross ties and was trotting next to me with his neck arched, VERY peppy for him and he trotted around his paddock like he felt great when I turned him out. Desire was pretty relaxed but will probably be sore tomorrow! I would have to imagine with that much adjusting it will take some–well, adjusting to.
Happy 3 years, Blazey boy, here’s to many more! 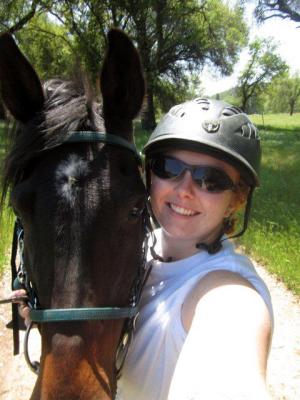