This afternoon was Joey’s first session with my trainer friend, B. She grew up on an Arabian breeding farm and is a great all around trainer, but especially loves working with Arabs. Can’t blame her! B was responsible for tuning up Blaze and getting me back in the saddle  and out on the trails after my accident 2 1/2 years ago. She exudes this air of completely relaxed, calm, unimpressed, infinite patience. You can tell just by watching her that her heart rate never really rises when working with the horses, even when they’re being snots. She takes it in stride and adjusts accordingly. Basically I’m kinda in awe of her and want to learn as much as possible from her, and luckily she’s willing to share her great wealth of knowledge. She is also a great human teacher, explains things simply and well, and can answer just about any fathomable question. So while I’ve certainly done ground work, some breaking to saddle, and basically dabbled in the ins and outs of horse training over the years, I wanted her wisdom and calm on my side when bringing Joey, an opinionated, slightly skittish 6 yr old halter broke Arab forward in life.
MY heart rate rose once or twice just watching her work and Joey was actually really good, it’s just the potential for danger now that makes me catch my breath. Joey is very sensitive, as horses and particularly Arabs are, and I’ve felt in our short time together he didn’t totally believe me, as I didn’t totally believe myself as his leader yet. The unknown quantity of a new horse just simply isn’t as thrilling as it used to be and my confidence wasn’t there for whatever reason. Hooray for good trainers who are also good friends that help us grow and evolve past these sort of things!
B started out with the dressage whip as an aid, I don’t have any fancy training sticks and really, it’s a stick for training however you choose to use it! You can see by Joey’s expression how thrilled he was with the prospect:

B ran the stick all over and up and down his body and legs and under his belly with very minimal protestation from Joey. His protestation almost always takes the form of moving away, whether circling or backing, and she permitted it but moved with him, persisting with what she was doing. He wasn’t wild or panicked, but trying to move away. Moving with him, backwards or in a circle, she gave him an out but persisted with whatever she was trying to touch, and he quickly realized that while he wasn’t trapped or in trouble, she wasn’t going away. Commence stopping, licking and chewing. Smart boy.

Once he seemed unimpressed by the whip being run all over both sides of his bodies and down the inside and outs of his legs, she put the lunge line on to use as a leg desensitizing aid. I’m *so* glad I sprung for the new 30′ thinner yacht rope lunge line, it sings through your hands and wraps around the legs as nicely as a rope will. My other lunge line was fat, bulky cotton and was such a pain in the butt.

B letting the rope wrap around and up and down his hind legs: 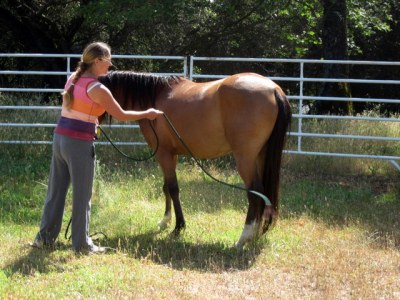 The blanket incident has made him pretty touchy about his right side, specifically his right hind leg. The trimmer has had both of his front hooves up on the stand (not at the same time..) and she has rasped some on each, but the hind legs were a no go zone thus far. That potential danger zone that orbits in my head since my accident had the whole nervous/spazzy response to touching hind legs with a firm Trainer Goes First label on it. Plus, I hadn’t been getting through to him about it the way I was doing it, and knew I needed to adjust something.

Here’s the thing. And this is probably like DUH for some of you out there, but maybe someone will learn from it, too. I was approaching things with Joey from a Clinton Anderson-esque stand point–now I don’t claim to be a serious student of any of the big name trainers, so if it’s more like someone’s else’s approach, that’s gravy, I’m no expert–in that when he didn’t permit the feet to be touched, I sent him out to work, and move his feet. Problem is, Joey has NO problem moving his feet, in fact if given the opportunity he’d rather orbit around the round pen at a booming trot for an hour than play the feet touching game. While the approach worked pretty darn well with my Arab filly Sheza–silly but young and fat and impressionable– it wasn’t even close to working with Joey, an adult horse with minimal handling in his past who is relatively fit and has his own opinions on the world. 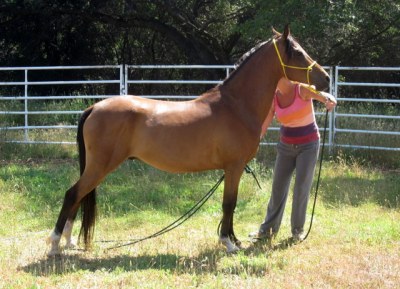 SO, the big revelation moment? Using the moving out around the round pen as the release of tension, rather than the “you go off and move your feet til I tell you to stop.” B worked with him, patiently circling around and around with him as he tried to move his right hind leg away, until he clearly got irritated, which he kindly exhibited with some tail swishing and a pretend “stomp at a fly”, then she persisted just a little more, in this case him letting her just touch that right hind hock, and then she backed off and let him move off around the perimeter. Didn’t drive him, just let him move out around the round pen, on the lunge line. He trotted at first but then gave a few anxious/irritated head tosses and broke into a canter. You could see him “running it out” as it were, and after just 10 or 12 circuits (hey better than an hour!)  he dropped his head and clearly asked to stop. She brought him back to the working space, and went to it again. Only twice in about a 45 minute session did he move out and do this, burning off a little steam before coming back in and trying his best.

He never got wild, or mean. He was always willing, and when he didn’t want to he was very mild about it, as in circling or backing, as opposed to being on the aggressive in any way. The way that B just moved with him and let him always have an out was genius, Joey is still an uncertain horse, low on the totem pole, in a new home. He didn’t know B from Joe Schmoe but he felt her energy and and tried very hard for her. In the end she ran the stick all over his body and between and around his legs, touched him all over with the rope, wrapped it around his legs, dangled it over his hocks, picked up his front feet, and ran her hands all over and up and down his beloved, Off Limits hind legs.

Touching the right hind, his least favorite (or perhaps most favorite?) leg. Observing closely to make sure the leg is still there when the annoying human is done: 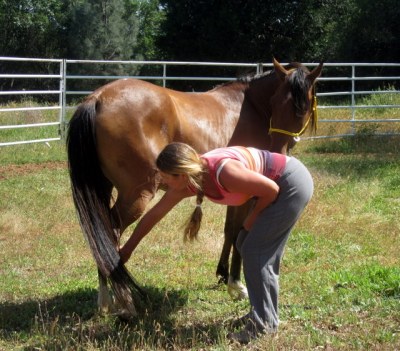 Whatcha doing back there? 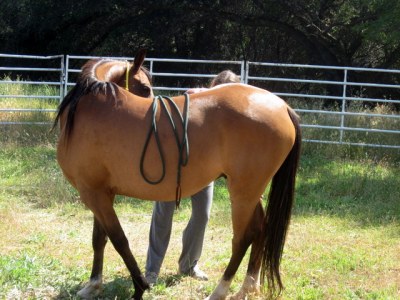 Picking up the right front, he’s decent with the fronts but the right is always the stickier side: 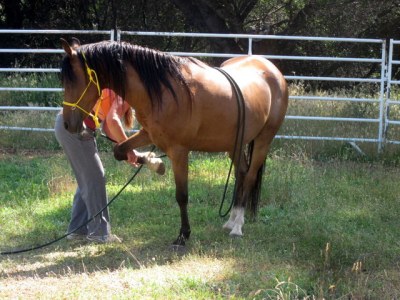 At the end, he didn’t want to have his ear rubbed, so B rubbed it. That’s what I love about her. She is almost annoyingly persistent, but calm and gentle about it so that the horses may be irritated/annoyed/scared to start with but are surprisingly accepting before you know it. 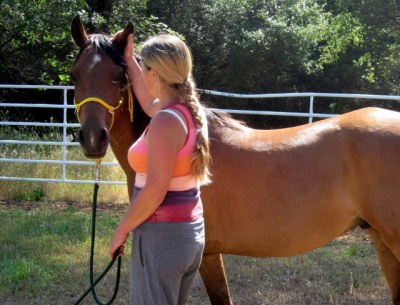 Joey likes his hose baths so he had one for a nice ending to his training session:

He loves drinking out of the hose: 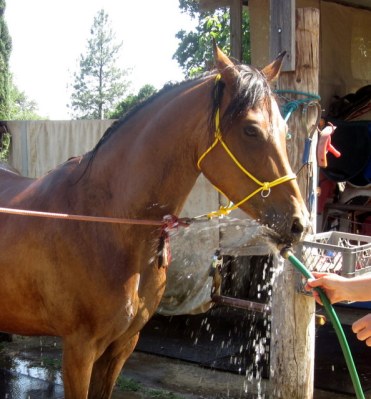 Just when he thought it was all fun and rewards again, the hose moved from his mouth to his head, and he found himself  drowning! Or so he thought. He tried to move away at first but after a few seconds just stood and let it flow over his head. You just can’t win with this human, buddy, you’ve met your match! And I’m his match too, with a little coaching from B    🙂

Try to drown me human, you get the Wild Stink Eye!

Licking and chewing, he did lots of that today:

2 thoughts on “Joey Meets his Match”