Today I packed up my Specialized, the shims and fitting cushions of different widths, Desire’s head gear, MY head gear, the camera, and off I went to the Wheatland area. I was meeting my buddy, J, to ride her gelding Chief while she rode her new mare, Sedona (not officially named that yet but I have to call her something besides “mare”).  Chief is a 6 yr old Pintabian that J has had since he was 6ish months old. He is very handsome and a good boy, but has some very Arab moments that J isn’t comfortable with. So basically, he is right up my alley    🙂
Have tack, will travel 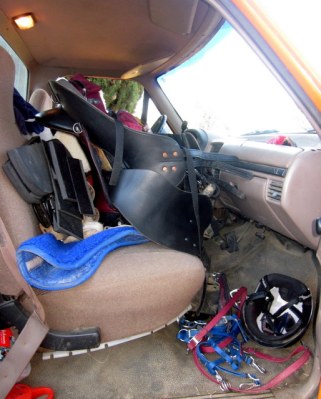 We loaded up Sedona-mare, picked up Chief from his last day at a trainer’s (there for collection/lead changing polishing work) and drove to the Sterling Pointe trail head in Loomis. We’d never ridden there, had no clue what trails we would be riding, but we’re game for an adventure. The trainer and a friend also trailered out and the parking lot was pretty full of rigs and people heading out on the trail when we got there.
By the way I must mention the drive to the trail head. It was a winding little road through the most immaculate mansions and manicured properties, one place even had a faux-castle thing going on. Then suddenly, there was a trail head and a porta potty! Kinda bizarre, especially  if you’re used to driving through Methtown USA to get the Lake Oroville trails like I am…
So anyhoo, I fitted the Specialized to Chief in about 2 minutes and felt pretty snazzy doing it. I’m no expert but I have switched the fitting cushions and shims out MANY times already, between Desire and Blaze, and am getting better with the quick change. Turns out Chief fit into Blaze’s shim/cushion set up which made it easy. The 4 of us headed out around 10:30 am.
Chief all decked out in Desire’s gear, he’s so sexy:

Chief and I heading out in the lead, no clue where we’re going but the sky is blue, the footing was good (for now), I was on a fun horse–life doesn’t get better than that! 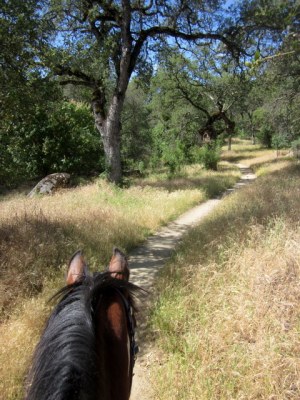 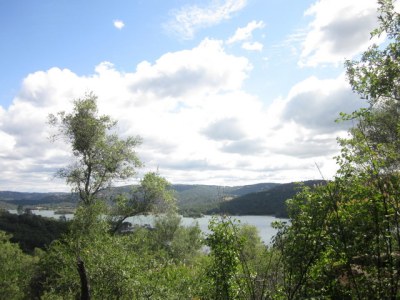 A happy J on her new mare:

Chief is da bomb. How cool do his colors look in my colors: 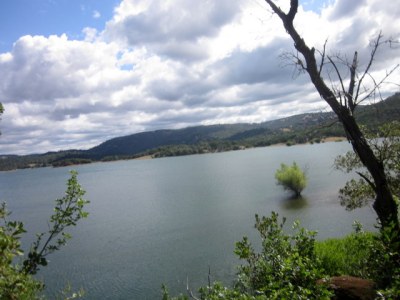 Brought to you by the Arab half of Chief:

J dismounted to cross the bridge as her mare was uncertain, but on the way back they rode right across it with no issue. Good mare

The trail was washed out and we decided to turn around: 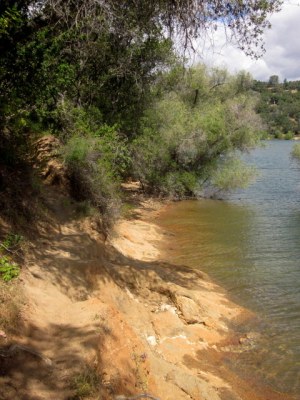 The other gals had to get back to the trailers and back to work more horses and J and I needed a pit stop, so we headed back for the trail head parking lot.
J and her steeds:

Leading the way back to the trailers, you go girls! 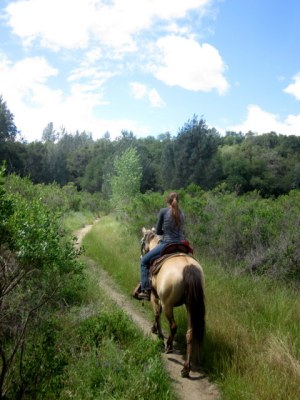 What a pair! Pit stop at the trailers:

Chief is a non-stop eating and pooping machine.He is just asking to be an endurance horse 🙂

He has issues being left or separated, but I used his pigginess to our advantage since he would snatch a bite any time we stopped. I encouraged him to do it and he started to not notice when J got out of sight around the corner. Then he would notice but he got calmer about the realization each time. When he gets wound up he gets prancey and grows a few inches, becoming every bit an Arab. When he realized he had a real bit and martingale on and wasn’t going to run through anything, he tried a couple mini rears. A good slap up side his head and he literally stopped and turned to look at me in what seemed like surprise. I really enjoy Chief, he reminds me of Desire in that he is essentially a very nice horse without a mean bone, but gets punky and needs to be told once in a while. It’s manageable and doesn’t scare me because I know him (and her) and pretty much know what they’re going to try and NOT get away with.
She heard mom coming:

It had gotten a bit grey and breezy by this point, I was wearing a long sleeve and my Whiskeytown jersey and was pretty well comfortable all day, but the weather was at that in-between point, cold in the shade and a bit too warm for a jacket in the sun. The other two gals left and J and I headed out again, this time taking the right hand fork toward the Granite Bay staging area. 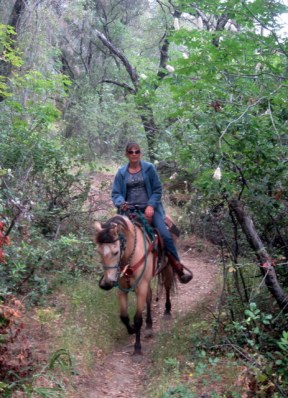 It wasn’t long before the trail got Real. Like rocky, bouldery, sheer drop off to the water on one side, narrow, deep trench knee/ankle knocker Trail Real. J has been riding all her life and said she had never ridden on any trail anything close to the terrain we rode today. I’ve done my share of rocky/sketchy riding but I was definitely impressed by some of the rock situations and big drops up and down. We did some rock scrambling and I told J to just sit tall, breathe, and let her horse do it. There was no way I was going to try to check Chief in his progress over those spots (unless he was doing something insane) and it really was easiest to just give them their head and let them figure it out.

Good to see that smile out on the trail: 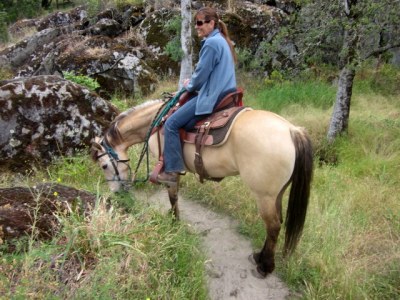 You can see all the cool boulders and rocks around us:

J’s mare Sedona just trucks down that trail. She didn’t hesitate a bit, she is literally one of those you can point at anything and she’ll give it a go. You can see Chief saying, “huh, really?” as Sedona picks her way on down no problemo: 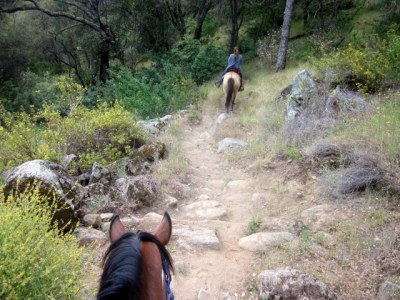 Chief would like me to read the Ear Alert that there is some crazy wood and wet stuff just below the trail: 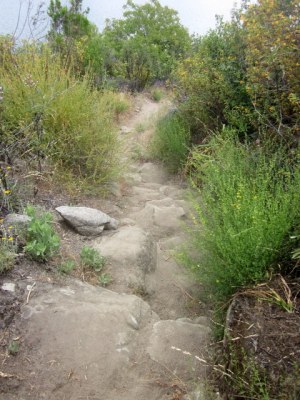 We turned around at 1 pm, after about 6 miles. We were just meandering and ogling the scenery and ooohing and aahing at the footing. It was J’s second real ride on her mare and her first longer trail ride in a while, so it was plenty of work for all of us and we were ready to head back.
Bet there’s some bass lurking there:

Wish the flower color came through, but this bright orangey/yellow bush was blooming everywhere and was a great contrast to the dramatic boulders: 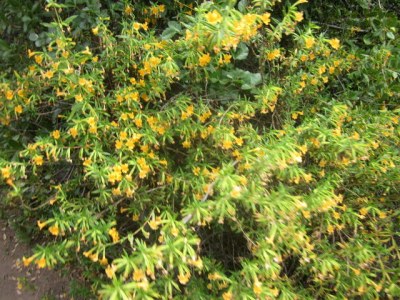 Picking over the rocks: 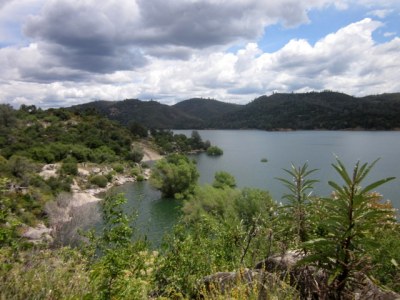 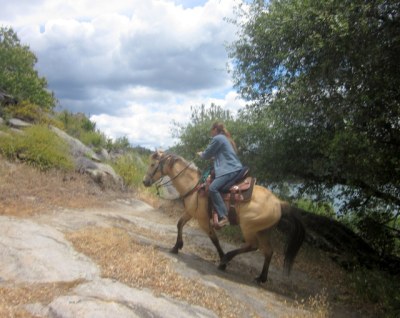 We were back to the trailers just before 2. Most of the other rigs were gone and there were really nice horse and dog troughs, as well as a hose with a good nozzle to hose the horses down. Sweet amenities!

Here’s Sedona after the tough, rocky 9 miles. Looking cool as a cucumber: 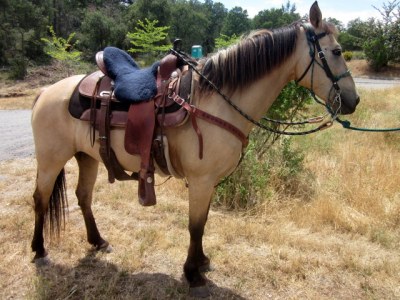 We hosed the horses off and let them relax and scarf for a few minutes.

A little deer herd wandered out into the parking lot and strolled on out the other side into the forest. 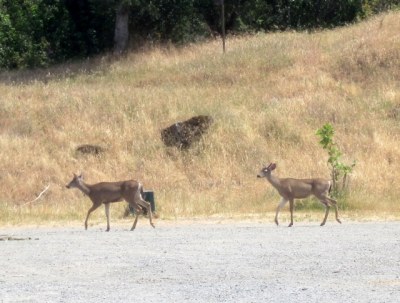 We ended up riding 9 miles in about 3 hours and what with all the circumstances, it was plenty. It was a great ride! Perfect weather and interesting trails and scenery, and so fun to be out on the trails with the first riding buddy I made when I moved to this area 4 years ago. I’ve known J and Chiefy the longest of any person and horse in my new Foothill life, and it’s neat to be able to feel “Remember When” moments with them already. We always have a blast on the trails. The plan is to do another ride next week, it’s fun to just drive down and have an awesome horse to ride in a different place, plus both of J’s horses get worked.

What a great day. Bedtime!