I called this album on Facebook “When the Brain says No, The Heart says Go” as in, though my brain came up with 4,000 scenarios of how ponying my filly out while home alone could go wrong, my heart said, ‘JUST DO IT ALREADY” as I have been putting it off, one way or another, for far too long. I did pony Sheza quite a bit as a very wee youngster, but in the last few months with a lot of focus on going to rides with Desire and training Joey from the ground up, Sheza hasn’t gotten out much. She did have a great trailer loading/riding session a few weeks ago, which was awesome and another big hurdle wonderfully conquered thanks to my trainer, B. But it was time for another jaunt out into the world, and when Sheza demanded to join her mother out on the trail this morning, I finally listened. She even let me halter her awkwardly over the fence, my ultimate test of if she really wanted to be caught. Apparently she did, and away we we went!
It was very smoky out, as you can see from the weird light in the pictures, but also about 20 degrees cooler. We only went a couple of miles as there are a few steep hills in that short section and I didn’t want to push it with the smoky air. Sheza filly was remarkably quiet in the cross ties after we got back!
It took fooorreevveeerrrr to get ready, I was annoying even myself at the time it took. I had to groom, fly spray, boot, tack up, get supplies, put my stirrup back on, lock dogs here and there, remember my cooling vest, and finally, I was ready..how it took an hour, I don’t know.. 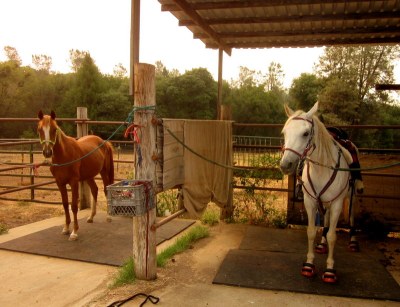 “mommy, what is all this crap you’re wearing?” 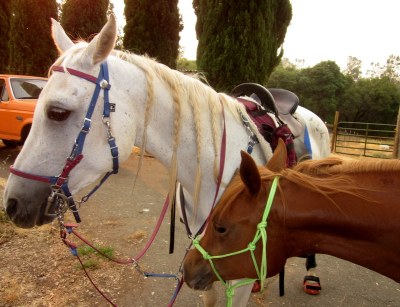 Sheza is a piglet like mom Desire, phew! Makes things so much easier when even spookiness is over ridden by the Need for Feed.

Getting flaxen on that mane!

It’s looking like fall lately, despite the heat and smoke…lots of fallen, colored leaves.. 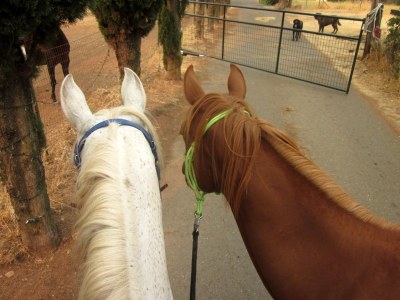 Desire and her Not So “little” filly 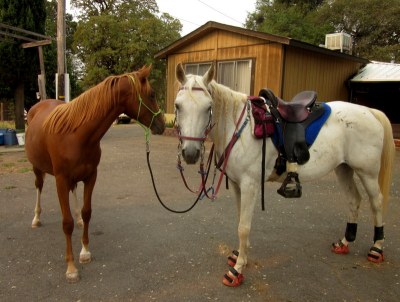 1 second later, an ADD moment so classic of these two–Who? What? Where? Food? 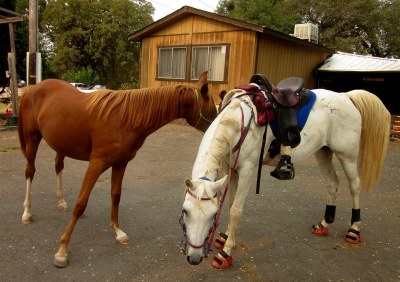 Now that I’ve done it successfully once again, in this stage of Sheza’s personality and Largeness, doing it again will be no sweat. There were no incidents to report, just a tired filly and a slightly weirded out mare–I believe Sheza is so horse-like these days Desire was feeling a little competitive ponying her and kept trying to cut her off LOL–and anyway, all’s well that ends well!
p.s. I did call my husband before I left and after I got home so someone did know where I went and with what assortment of horses