By the time I got home from hill conditioning yesterday, cleaned up and put away Desire, and sprayed down the inside of my trailer (prep for the ride next weekend & wanted to check the floorboards under the mats, more pleasant when things are clean) trainer B had arrived. Joey has been adventuring out on ponied trail rides with Blaze and I but hadn’t had a formal training session in 2 weeks. I had noticed he and Blaze having the beginning of a standoff when I got home with Desire, after I had just been rhapsodizing to N on the trail about what good, non-threatening buddies they were. Suddenly that afternoon there were pinned ears and magnificent trots with tails flagging as they went to the bottom of their paddocks, then they would turn and race side by side back to the top, multiple times. I could tell Joey was feeling confident and big for his britches so I was interested to see how he was for B.
N said Joey’s long face and big neck don’t translate in photos, I think because I usually take pictures of the flowing mane side…so here is his chunka neck and his very long nose from the OTHER side

2 weeks since his last session with the trainer, how will he be? Let’s find out

Joey was pretty polite from the get-go, a little nervous about me walking behind him down to the round pen again but otherwise he got right to work in the long lines for B.

He’s getting a rump on him from the pony trail rides!

She wanted to make the session short and sweet so after a few circuits of trot she asked for some whoas, turns, a few steps of backing, and then went right into ground driving him, but from behind. So far she has been in the middle of the round pen, or back but just off to the side of him, she had even stood behind him with the lines but had not been behind him in forward motion for more than a step or two up to that point. This time she put him to the test, and he accepted it.

Anyone who has seen the War Horse play or movie will get this! Here is Joey’s TOTAL War Horse moment as he leans into the traces and pulls that crucial plow (and the War Horse horse is even named Joey, people!)…or in this case, long suffering Arabian Joey tolerates the annoyingly persistent human ground driving behind him!

You can see in the photo below that he was quite unsure about her walking behind him, and he did squirt forward and try to flee a few times but she was able to Whoa him back to a halt with the reins and voice, the first time that has happened! She has slowly been getting him acclimated to a feel of the bit and has not been “pulling” on him at all, but today showed us that he *can* be shut down with the bit when he looses his cool, another great step forward toward becoming a saddle horse!

He was nervous, but after she shut him down a few times on attempted trot-offs, he contented himself with lots of bit chewing, some head tossing protestations, and some rather fancy half passing whenever he went by me. Passing mom leaning at the rail is always a good excuse to lose your composure a little!

After ground driving him from behind in a couple of successful, calm, full circuits in each direction, you could see the fear leaving Joey and the new, more unimpressed/mildly annoyed Joey coming out. Watching his little ego form is truly fascinating!

Still aware but not so impressed 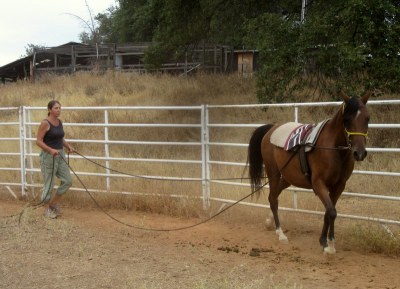 On a perfectly executed halter, turn, walk off, and whoa, B called it a day with the long lines. She got the point across, Joey was accepting and used his brain instead of his Go, and that’s all that was required. She let him off the lines to relax in the round pen but Joey was on her like white on rice! 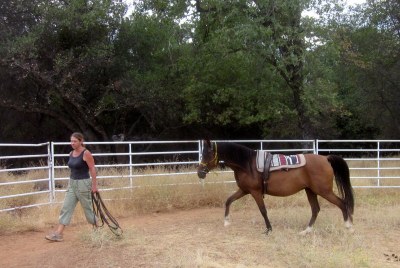 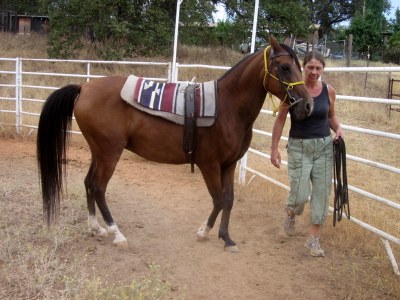 Finally when B put the ropes down and jogged to the other side of the pen Joey stopped and stood on his own for a minute..”hmmm, she is confusing me again”

..but not for long! Come back, human! 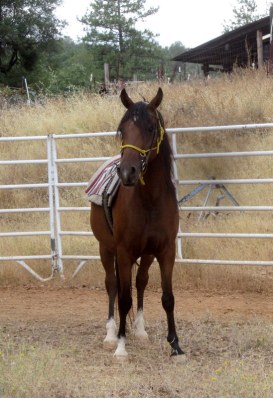 Look at that butt and shoulder muscle building already!!

B is very persistent and Joey is often very un-amused, but he always forgives her 😉

When we turned Joey back out he cantered all around and bucked and flung his head and pinned his ears at Blaze, blowing off steam and putting on a show. B wasn’t so pleased to see his bucking skills since she will be the first one on him 😉

The weather was really changing last night, thunderheads were rolling in and the humidity was high. We got a few sprinkles of rain but nothing significant, never did hear thunder.