Since getting back from Chamberlain Creek last weekend it’s just been a dose of Real Life. Busy here, busy there. The last gasp of heat had me in a mood and then yesterday, at last, the heat broke. The windows stayed open all day, the swamp coolers stayed off, and Blaze’s woolly jacket almost seemed appropriate. It was 50 degrees this morning with a daily high of 76. This redhead is HAPPY!
Yesterday I took advantage of the cooler weather and hauled Blaze down to my trimmer’s so she could supervise me working a full 4 hoof trim on him. I was running late and pulled him from the field and put him straight in the trailer, skipping the usual grooming and primping routine. He came out of the trailer at D’s with a sweat on and an A-T-T-I-T-U-D-E. He was an absolute shit to work on, using me as a fourth leg, pivoting, moving, yanking his legs, blowing, snorting–he even started pumping his hind legs when I was working on them and finally kicked out and knocked the nippers out of my hand! I was so shocked I froze but D was on his case immediately. After she put him back in line he was quite polite and a bit apologetic.
D giving Blaze “The Look”

I came out of it sore, black and blue knees, a screaming back. I learned to not go into a full trimming project when your back is already sore! Still it was wonderfully generous of my trimmer to give me the time and advice and I learned a lot and feel much more comfortable working on feet unsupervised now. And Blaze’s feet looked pretty darn good, if I do say so myself!
I had a go at Desire’s front hooves this evening while all D’s wisdom was fresh in my mind. Of course each horse’s hooves are different and Desire has much thinner hoof wall, so I really just drew back her heels did a mild mustang roll, as best I could without a hoof stand. I want to take the heel tags out still too because she had a tendency to be thrushy.
Left front, untouched

Left front, drawing back the heels 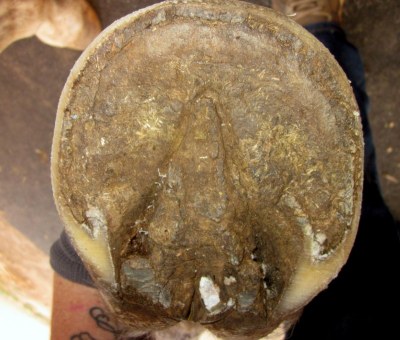 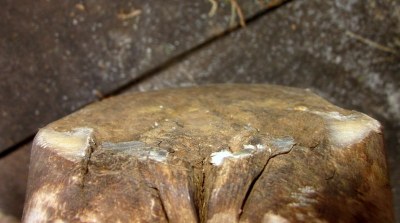 Left front, mustang roll. The pink spot on the lower right hoof wall is the last of her old flare growing out 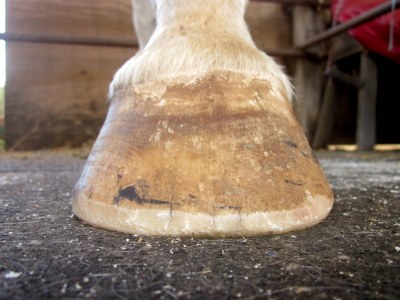 Right front, finding the heels. I have to be very careful to keep the rasp flat when working the heels, not let it roll bck at all

Since recovering from the rusty nail incident, Joey has been quite full of himself, tearing around his paddock at speed “WEE LOOK at MEEE I’m SOUND!” and challenging Blaze more and more. 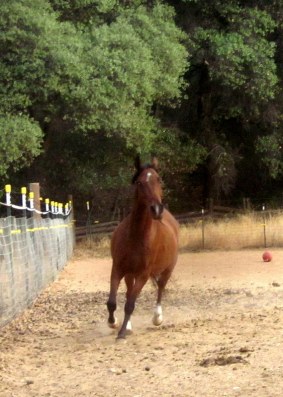 “who, moi? I am innocent and angelic.”

Due to his injury and lack of time, the trainer hasn’t worked him in a few weeks. This evening he and Blaze were REALLY having it out over the fence, charging it, rearing, and trying to bite each other’s neck. *ahem* Gentleman. And I use the term loosely.

When I finished Desire’s hooves I worked Blaze in the round pen and the arena til almost dark. It was his second day of Mighty Mouse attitude and he clearly has energy to spare. He hates arena work, as do I, but he is a bit of a loose cannon sometimes-endurance pony these days and could use a tune up. The weather is cooling and his woolly coat will no longer protect him from work!

Oh, and our giant pumpkin finally stopped growing, but not before getting, well, giant.