After a 4 week hiatus due to his injury and my lack of time, Joey finally had another session with trainer B this afternoon. But first, early in the a.m. on a picture taking whim I got up on a rock in his paddock and totally freaked him out, which earned me some lovely photos. As my trainer pointed out this afternoon, he is pretty much a wild horse, experiencing nearly all the nuances of being trained to handle and saddle for the first time. At 7 years old this is only the second place he has ever been in his life and so much that I take for granted with my other horses is not only missing for him, the building blocks are even missing, and at his age he has already formed opinions on things. He is very tense and nervous, and still kind of thinks humans are predators, or at least not always to be trusted. Even the plastic curry comb on his skin today got as many snorts and flinches as crazy humans on rocks or crazy humans bunny hopping. When I implement things I see B do with Joey with Sheza, she reacts initially but is quickly bored by my antics, or wants to participate. She knows and trusts humans, and is still impressionable, and it makes life so much easier. Joey’s will be a long road, but with patience and time he will make a nice little saddle horse.
Human on rock, WHY?! The better to make you look pretty, my dear 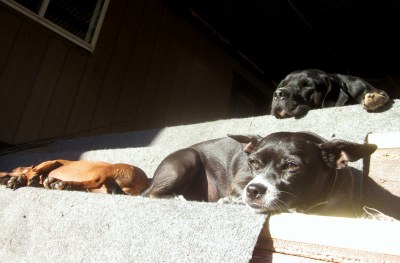 Joey hustling away from the weirdo on the rock 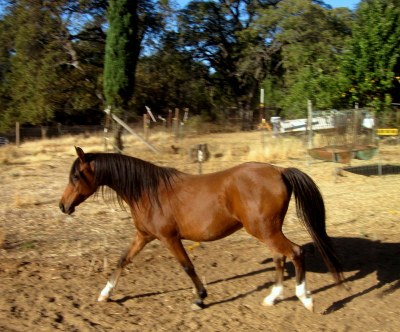 “what are you up to down there?”

Wilbur the Mini Doxie only wags harder if the ball is in the air. He may be getting a beautiful little chocolate dapple cousin to play with soon!

Training Arabs is always enhanced by the helping hand of a strutting, gobbling SuperTurkey 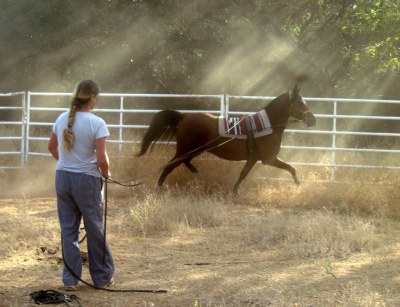 Predictably, Joey had lots of energy to burn. He did a lot of very fast moving in both directions initially, and B let him work it out. Still he had enough of a Whoa on him in the bit that after he came down a little B asked him to focus through his anxiety and maintain the walk in the long lines with her to the side and gradually more and more behind him. He was half passing beautifully around the round pen in both directions to keep her in his right eye where he wanted,  but by doing so he was unintentionally also putting her more and more directly behind him, something that usually scares him. B saw the value of this, and just quietly persisted until he was not only walking a normal circle, but also standing nicely with her square behind him:

Time to play Hopping Human, and Joey is not amused 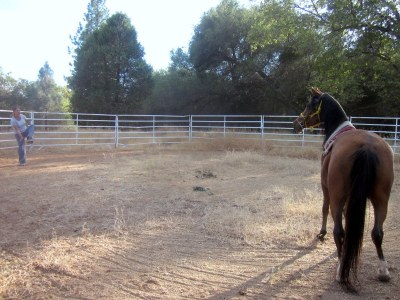 No bath today as it was CHILLY by the time we finished up around 5:30. Instead B took him back in his paddock and got up on the rock that I was on earlier in the day. You can see he was about as thrilled with her doing it as he was with me:

When she stepped down the stomp of her feet started him spooking, and she didn’t let go as he spooked and tried to bolt around the paddock away from her. He was scared of her running stomping feet keeping up with him, but she hung with it until he figured out HE had to stop, in order to stop HER feet. I saw it click in his brain and after he stopped dead and started licking and chewing she un-haltered him. Then we stood around on the rock in his paddock chatting for a while until he was standing quietly at the fence with Blaze, just glancing at us once in a while. Like I said, a long road for Joey. But with the quiet tenacity and wisdom of my good trainer at my side, I have faith.