It was rather a rough ending to 2013 with a sudden loss in the family right after Christmas, but as with all things, time will heal and we must sally forth to fight and live and love another day. After an awful migraine yesterday which cancelled even my New Years Eve plans with good friends, I  was dead set and determined  to ride today. I really wanted to start the New Year right and get out on Scrap this morning–and also test the new saddle I just traded one of my Specialized for! It’s a Frank Baines Elite English saddle and it is also buttery soft leather and lovely to look at, especially when modeled by Scrappy-doo:

It seemed like a good fit on his back without a pad, then I added the one English pad I have (borrowed from N, surprise surprise), decided it did indeed feel worth a test ride, and away we went! 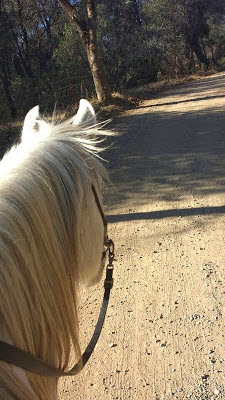 The saddle felt great for me, my knees were relieved to be away from fenders after so long, and my metal ankle almost makes a normal proper angle with the leathers (I noticed in photos that it sticks out wonky and doesn’t flex side to side well). Scrappy was forward and cheerful, and only wanted to canter. Those of you who have followed our mental/physical/tack figuring out process since I got him in July know that he came to me cranky about cantering and has, with chiropractic work and conditioning, become more and more willing. Still, a freely given canter on both leads means that this guy is feeling *good.*

Not only did he canter willingly on both leads, he threw THREE flying lead changes. 1 of them was super uncoordinated, one of them wasn’t too shabby, and one of them was flawless! We were cantering about 10 mph on a loose rein each time and he just popped over on his own. Nifty!

There was a bit of sliding but I didn’t tighten the girth that well the first time, being used to a cinch lately. I may have to use my crupper, but we’ll see with further tests. Overall it was really comfortable to ride in and he seemed very happy in it.
coming back down the road past Sheza and the little emperor

I was unpleasantly surprised to find matching dry spots on his withers when I untacked at home. The saddle pad wasn’t my ideal choice but I haven’t played with saddle fit aside from Specialized in a few years, so I’m not entirely sure which direction to go. Maybe a different pad will fix it, maybe it needs to be reflocked? He went so well in it it would be a shame to not be able to use it on him but I won’t compromise on fit. I still have to try it on Blaze of course, and there are two fillies in the wings yet to grow up as well! I definitely like the saddle and think I’ll hang onto it even if it doesn’t pan out for Scrappy (but I hope it does!!).
Here is a Rushcreek ready for multi-days–who has gone 8 miles. And don’t let the flames on the rump rug fool ya, it wasn’t at a blazing speed either. Woe is Scrappy!