Winter seems to visit us in fits and spurts this season. We had a week long spasm of snow and freeze in early December, then it seemed as if spring returned, for weeks and weeks. We had a couple days of solid rain supposedly on the way for the end of this week but as with the last rain forecast it resolved into a single day and night of storm. We got nearly two inches here in the foothills, which doesn’t do much for the long term drought but felt like a blessing nonetheless. At last the dust was settled and the land looked newly soothed and moistened; even little birds were out flying around in the rain, chirping, seemingly celebrating it.
The initial forecast of 20mph winds and rain sent me out to blanket Rambo on Wednesday, for the first time since his arrival a few weeks ago. I’d seen a picture of him looking distinctly not amused wearing a blanket for the first time a few weeks before he ended up with me, so I knew it could be done but didn’t know *how* it had been done and therefore what I was in for. But who cares? I approached him the same way I approach all the others here whether they are 2 or 18: showing them the blanket, letting them sniff and snort at it if they are feeling particularly Arabian that day. Rambo did just that, waiting politely to be haltered then eyeballing the blanket and sniffsniffsniffing as he does. He is very scent oriented and when nervous smells everything like a bloodhound and also marches around doing the phlegmen lip thing pretty often. It took all of 30 seconds to progress to rubbing the blanket on his face, neck, and then as he didn’t seem worried, sliding it over his back and into place. It was well seated and he got nervous with it over him and started to walk away, so I didn’t let him RUSH away, but I did let him walk, with my hand on the lead and on his side, calmly. He walked to the Sheza/Napoleon/Scrappy fence lines and stopped, sighed, cocked a hoof, and then stood like a rock while I cinched Blaze’s sheet down around him. I can see that he is a horse that needs to move his feet and could be explosive if someone didn’t understand that and tried to force him to just STAND for things on principle. My theory is he will get to that point, but allowing him to cope in his way, within reason, makes for a more positive experience in the beginning. Do I want the blanket to mean a fight, or a noneventful weird human thing that just meant more carrots? I think you know the answer!
Scrappy got a blanket coz Rambo had to, and they could then commiserate on how dumb they looked instead of one trying to undress the other  😉

I was sad to see the storm hadn’t lasted as long as predicted, but the horses were happy to see me coming to strip blankets, especially the Nebraska child who certainly seems to question this whole blanketing in pasture notion. Yes DEAR Scrappy boy, after Rambo’s polite blanket session, *bronced* his blanket off, while haltered, then snorted and quivered til it was buckled on. This from the 100 mile endurance horse. I have a sneaking suspicion he’s been hanging out with a certain 4 legged redhead too much recently..

Who ME?
The 2 1/2 yr old has a Come Hither look, break out the horsey chastity belts! 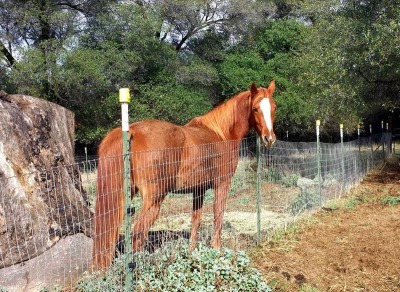 Rambo got a little squirty by the blanket sliding off his butt and trotted away from the plastic-y sheet sounds, so I parked the carrot bag on the blanket and turned away to “fix fence,” just seeing how long it’d take him to come back and check out the scenario. OH, I’d say about 15 seconds on that one, and funnily enough he didn’t stomp/chew/drag anything, just sniffed as below and then waited for me to give him another carrot. 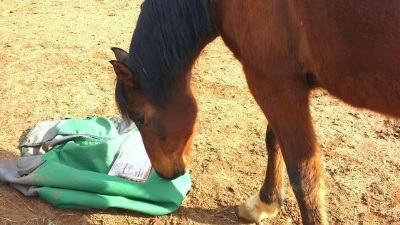 I think this is the first photos I’ve gotten of Rambo where you can see any notion of his odd walk, here he is mid stride looking to roll, but you can see that his right hind sort of “Swings” out to the side as it does in the slow walk. 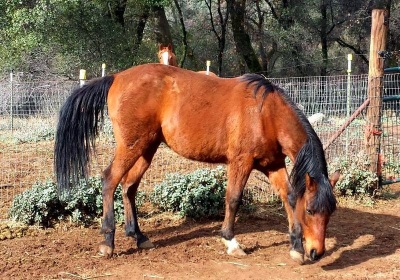 Doesn’t slow down his rolling at all, though he does a weird athletic compensating hop to get up on that right side at this point. 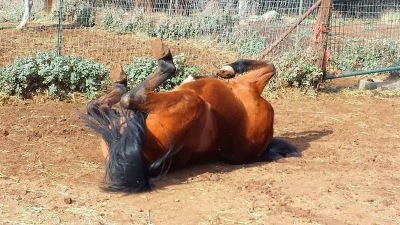 Scrappy has made himself a perfectly round and well maintained dirt/mud hole at the top corner of his pasture, here he is doing his daily maintenance on it:

The sun is very much back today, plus a frost. No more rain in the 10 day forecast. Bye again Winter, hope you’ll come back soon!

One thought on “It Was Winter–Oh did you Blink?”