Today I made good on some idle threats. I’ve been contemplating joining Desire’s paddock-with-shed to the largest pasture on the property that has the arena inside it. Since Desire is retired it only seems fair she be on a big ole space to roam but I like her to have a shed when the weather comes. Thanks to the arena there are a couple of extra corners and gates; with some gandering I deduced I could use the corner gate off the arena as a 2-way if I just cut a gate sized hole in the bottom of Desire’s pen and shut the existing gate that was previously open against the arena, viola, one big space, since there is ANOTHER gate at the other arena corner that could be left open.
Desire seemed pleased with this notion and checked out the larger digs

Not to be outdone, Blaze jumped on the 4hooves off the ground train

My other “threat” was putting Rambo on the Sheza-butt hill to build his sad little hiney. Which meant horse shuffling since Sheza was on the hill and not to be mingled with boys. Since I had just expanded Desire’s quarters to the largest available, why not add another resident, thereby freeing up the Sheza hill for Rambo! Sheza vacated the hill and joined momma Desire and goats on the house side of the property, and promptly got in on the 4 hooves off the ground action!

Sheza herded the goats as  a yearling and is clearly still game for it. She put those goats through paces they didn’t even know they had! It was hilarious until it caused the goats to start finding and exploiting any and all fence weaknesses to get away from the galloping red whirling dervish. Still now my fence lines are all checked and the goats got a good workout, as did the mini horse Napoleon who trotted and screamed for his Sheza girlfriend for a couple of hours. 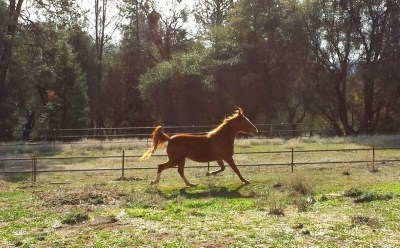 Horsey tetris is quite entertaining. My generally clever horses are not the brightest when it comes to connecting the pasture dots. Finally the suspense of Sheza realizing she was in the same pasture as Desire was killing me so I opened the obvious line of sight arena gate that I had closed to open up Desire’s paddock. Sheza immediately went OH THIS WAY!  Genius filly.. 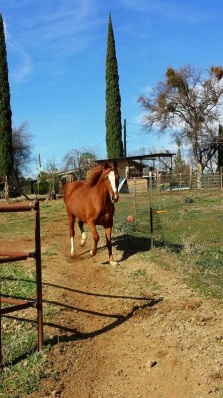 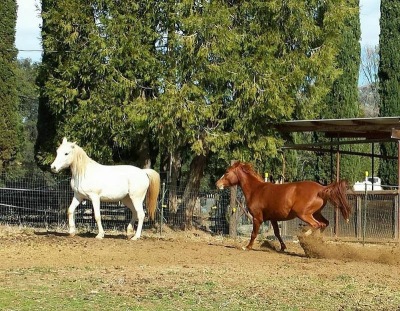 I have intentionally kept Sheza and Desire separate since weaning. Desire is quite squealy and dominant in the pasture and Sheza attempted to nurse off her for a good year after I weaned her, which was not on Desire’s list of Okay behaviors. Sheza spent the last 2 yrs exclusively with geldings and has given nary a squeal, despite exhibiting clear heat in the last few months. She’s a solid Junior Citizen now, or so I hoped, and indeed so she proved by rushing up to momma D but stopping short to greet her with a polite baby mouth, zero attempts at nursing, no squealing to be heard, and total mother-daughter harmony.

Interestingly,with the obvious line of sight corner gate I let her down through closed, but the other gates left open Sheza later left Desire, went the long way around the arena and came back up around so she’s sharing fence line with Desire but has kept herself essentially in “her own” pasture area, though she could be right in with mom if she chose. Clever girl has learned some herd boundaries and is feeling independent it seems. Her third birthday is in just 2 months and then it’s off for 30 days light saddle training with a dear and trusted friend. How time flies. I can’t wait to be sitting on the back of a foal that I once helped deliver from my own endurance mare, what a wild and fun thing that will be.
Not so long ago in the same paddock..

I look forward to seeing Rambo’s tragic little butt grow in the next few weeks as he conquers the Sheza hill, too!

3 thoughts on “Herd Shake up and Gorgeous Girlies”