On Wednesday I had another wonderful evening session working and riding Sheza filly. 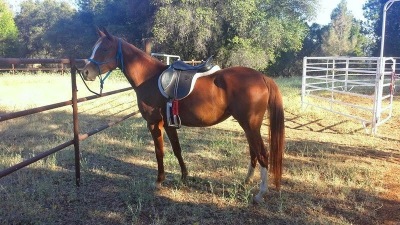 “trail riding” in our big pasture 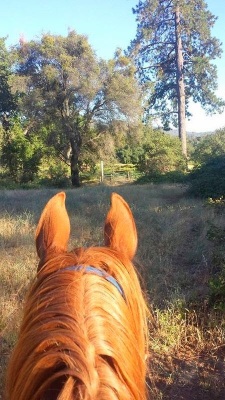 Something I have to be very conscious of with bringing Sheza along is to avoid falling heavily into habit patterns early on. That is, some routines and patterns are great to establish comfort and consistency, but Sheza is on the smart, manipulative end of the brain spectrum and it takes doing the same thing in the same order and time frame approximately twice for her to think she knows what needs to be done, at what speed, and especially when we’re finished and ready to do something else. This means I need to keep nagging myself to switch up my own habits of doing everything in the same order, finishing up and putting the horse away immediately, etc. As much as she needs to go out in the world and experience ride camps and spooky social situations of all kinds, she also needs to spend plenty of time tied various places, learning that standing around quietly is old hat. She the sensitive type that let’s the world know that to be tied in a new spot is DIFFERENT, or when things are moved it’s DIFFERENT. Sheza so far in her riding horse incarnation is much as she was before–super smart but undeniably *dramatic,* and so similar to her mother at times that it’s almost like transposition in time. Still she has absolutely found a lot more of her brain after those 2 months at training, and I just can’t wait for all our adventures ahead!
looking down at momma Desire and little step -sister Rushcreek Aurora. Time flies!! 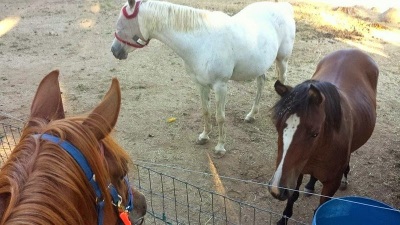 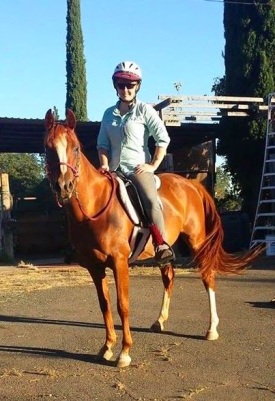 Below is a fine example of how Sheza has mellowed out! After about an hour session of round pen work and a short “trail ride” around the big pasture, I parked her at some alfalfa scraps and had her stand there for untacking, not tied. She obliged completely, didn’t move a muscle but to clean up the hay, then stood there quite happily for a hosing off. Pretty mature of my spazzy girl! 🙂 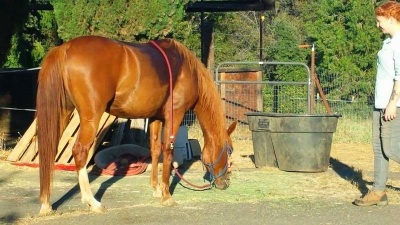 My much anticipated Skito saddle pad arrived yesterday and this morning I saddled up Scrappy with it and the Sensation and worked him in the round pen for about 30 minutes, refreshing our session the other day about giving to bit pressure. He was really getting the picture today, both in the round pen *and* out on a 13 mile cruise through the neighborhood. A mile of that was us having a turn-around-and-canter back the other way discussion about not rushing home, but otherwise we had a really nice ride.

his front Rennys were a little tight so we rocked the Renegade Vipers today, so far so good 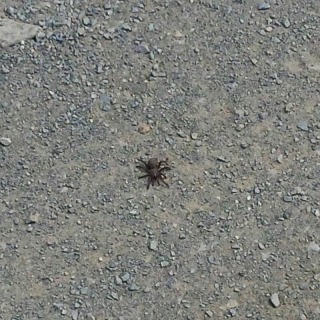 Yeah, apparently there are tarantulas around here?! We were merrily heading for home when I saw this big dark shape in the road. When I saw what it was I immediately pulled up to take a picture so I could stare in proper zoomed in disgust later when I wasn’t on a horse. It rared back and waved seemingly hostile body parts at us, for all the world as if it wasn’t intimidated by us stopped and staring so near. I got my picture and was sufficiently squicked out and we went on our way; not even a minute later a truck sped by us on the road and I’m nearly certain the spider met it’s demise, but wow, I won’t forget it!

So we had a lovely, spider-sighting ride. BUT. When I hosed him off back at home I could just see the pink skin starting to show through at those spots behind his shoulders again! Not badly, but visibly pink where it wasn’t before. Since I wanted to test it straight first I didn’t use the crupper or goop his back, but we only did one hill of any real gradient and I haven’t seen the pink since I stopped using the Frank Baines and regrew the hair there.

What do I do? My husband says goop Scrap’s back at those spots, use the crupper, and go to the ride next weekend. My cautious side says that’s going in with an issue already there (though he isn’t back sore and there aren’t any actual sores or rubs currently). That pink showing again though says something is brewing again to me, yes?

6 thoughts on “Saddles and Smart Fillies”