On Sunday Scrap and I threw down some trailer miles to join a good friend and her trail eating Morgan on some gorgeous, hilly, technical trails a few hours away. Our local trails are pretty slimy and it was great to put something serious in front of Scrappy after our feisty “LD” a few weeks back. Thanks T for the photo supplementation!
arrived, escorted in by our local buddies T & Jazz 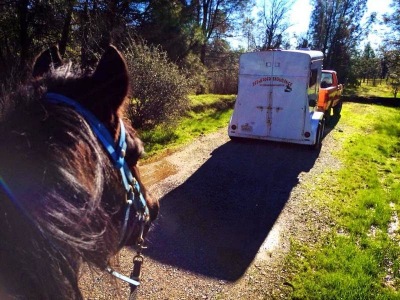 Jazz and Scrapper doing a warm up stare down. Scrap’s first time up there!

I’d ridden some of the trails on the Whiskeytown LD and 50 milers in the past but this was Scrappy’s first time there and we had a grand time moving out on the good footing, busting butt up “The Terminator” as they call it, and cruising around the Whiskeytown ride camp area before taking some awesome wet and rocky trails (with a few *steeps*)back up to a nice gradual descent on “The Escalator” and a good cool out walk back to the rigs.

Scrappy wore his new ported Myler Kimberwick on the ride, and a running martingale (and I wore gloves!). I had a snaffle on board in case he really objected to the Myler but happily he carried the kimberwick quietly and *quite* responsively. He was forward and excited to move out with Jazz and started to get hinky a few times but after checking himself on the curb setting he was a very polite and engaged Scrappy, and there was no need for strong contact. I know some people raise eyebrows about “bitting up” but I’ve now found with two completely different horses (Desire, Scrappy) that the switch from a blithely ignored snaffle to a Kimberwick oomph nearly negates the need for strong contact. It’s there when I  need it, and I don’t need it often. That’s just my experience and what has worked so far for my horses, and of course this wasn’t an amped ride start scenario so it’s yet to be fully proven. I found Scrappy’s competent  responsiveness reassuring though, as he’s the type to let you know pretty quickly if a piece of tack will work or not.

after the first big climb, Scrappy pretending he’s concerned about the edge
(he’s usually hugging it with one foot almost sliding off..!) 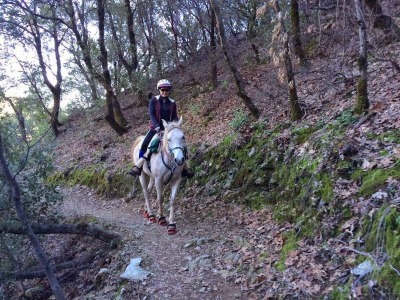 T and Jazz leading the way! We are both.. 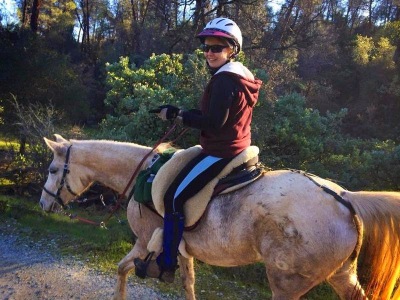 We did lots of water crossing, climbing, and some rock scrambling, and I’m happy to say all 4 Renegades performed flawlessly. I’ve had great luck with them but the combination of water/speed or water/speed/hills is a treacherous one for any boot, and I was impressed with their performance. I was too busy riding to get good photos of the wilder stuff but here’s a peek at some of the wet, anyway:

after a nice winding descent, cooling out toward the trailers and Scrap is fresh 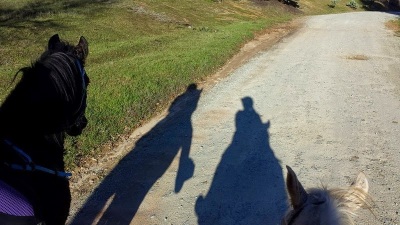 It was a great day on the trails and really made up for the expensive clusterfuck that was our last ride of the 2014 aerc season.  Boots, saddle, back, bit all organized and I’m so looking forward to 2015 with this new fit, motivated, and under control (?!) Scrappy.