I’m a person of gut feelings and mild superstitions. Ignore either, particularly the first, at your peril I have found. It’s an interesting mix when paired with goals and ambition; it becomes a delicate balancing act–I’m doing it!!  Look out world! Wait..is this niggling feeling paranoia or the trusty ole gut kicking in? Hmm…hmmm.

You see, I was just outside the AERC season-end points in my weight division and the last ride of the season, the Gold Rush Shuffle 3 day, takes place 45 minutes from my house. I’ve never been national year end anything, except frustrated and hopeful, and honestly I don’t really give two figs about point standings or placings, generally. It was just so close this season, after a personally unprecedented AERC tour of 4 states and a streak of catch riding had my annual mileage the highest it had been in 5 years. So close. Yet far enough, as others with the same notion would no doubt be attending the three day ride, surely bumping me out if I didn’t go.

Take Kenny!  you say. Welllll…I suppose it’s timely now to ‘fess up my long term goal for my small, snarky, crooked legged amigo. I’ve got my eye on the purported extremely-rocky-but-great-time Virginia City 100 Miler next September, and as such I have a tentative training/ride schedule for him all lined out. It definitely does not include a flattish ride in terrible-if-it-rains footing on trails I’ve ridden til I’m cross eyed for the last 10 years, in pursuit of an egotistical goal. After all, Kenny for sure gives zero shits if I make it into the points. Actually he might give one, on my boot, for funsies. But you get my drift.

I had an option to ride Mustangs again for Mark but I had an abundance of stress going on in daily life and when offered Chief, a local friend’s Pintabian gelding I’ve known as long as the trails who’s first LD I put on him 5 years ago, I went for the better known option. Catch riding has natural adrenaline already built in for me with my history of kissing dirt and low grade PTSD and I find adding more nerves and uncertainty to the situation rarely does you favors with an equine partner. I felt good about Chief and I could still keep Kenny on his VC100 schedule. I packed my truck with my Catch Riding Essentials (I’m writing a post on that, btw), set up my cozy bed in the back seat–and set off into rain.

well, we’ll give er a shot…the weather cleared, and my steed looked good

Thursday was Thanksgiving of course so I had enjoyed a turkey dinner at home with the husband before setting off and after a little ride camp visiting, vetting in my steed (A’s), and packing my saddle packs, I headed to bed for a good turkey coma pretty quickly.

I hadn’t set foot in Chief’s stirrup since his first LD 5 years ago but I knew he was a good boy and his owner J had been keeping him tuned up. Soon enough it was 6 am (6:30 start), the stirrups went up a hole, I settled in, and Chief and I were off to figure each other out again. He was forward but reasonable, his worst trait being his enthusiastic hollering for his stable mate, who obliged by yelling back. We did some laps around the dirt roads below camp, warming up, not wanting to be by the front runners but not looking to be buried too deep either. Chief had breezed through the hilly Chamberlain Creek 50 miler hours faster than Kenny and I the month before and these were his non technical home trails so I planned to maintain decorum but not hold him back beyond reason.

Chief quickly impressed me. He took to a steady jog when asked, took one or two No Reallys but then slowed to walk on the descents and muddy bits–and his hill attack, phew! He dropped his nose to the ground, rounded his topline, and powered at 4 mph+ uphill at the walk, rarely trying to break to a trot. I’ve ridden a lot of horses in my life and in this year and that was one of the more impressive attributes I’ve experienced the benefits of. As other horses jigged or trotted, Chief effortlessly passed at a power walk. He also had buttercream trot-canter transitions, in both directions. He had been a good solid prospect 5 years ago but now he felt polished and powerful.  If I could name any detriment to Chief’s potential, it would be how hard his hooves hit the ground, he was smooth and comfortable but not light on his feet, something that rings warning bells in me ever since retiring my mare Desire at 18. She was a ground pounder like no other and arthritis came fast for her. You know how it is, once you’ve had a horse with an issue in an area, it is a paranoia strobe light for you while riding all others. Anyway, J had told me that Chief probably wouldn’t drink for the first 15 miles or so and I had packed carrots and other goodies so we cruised along in our own pocket, snacking, enjoying the day.

Riding a reasonably behaved horse put me in the position of being other’s brakes and steering a few times throughout the weekend and I can only encourage those that find themselves in that position to ask if it’s okay as you almost crash into the horse in front of you, and thank those who did…

The first Loop was 25 miles (he drank at mile 17, good call Mom) and brought us back into ride camp, right up a steep hill, which served to amp up Chief in a couple of ways. For one, these are his home grounds so he knows exactly what and where ride camp is. Also, he knows his stable mate is possibly there–OMG NEIGH!!! And finally, a steep hill does great things for bringing down heart rate..err. J had told me that Chief’s metabolics were not his strongest point, i.e. he’s a large horse who needs cooling and smart riding, he wasn’t clipped (hindsight 20/20), and it was sunnyish and humid, so she met me out with a cart to strip his tack. We tried to protect our ear drums from his hollering (stablemate was gone on LD at that point) as we hosed his front end and legs off in camp, and he was pulsed down in 5 minutes. We decided to take him back to the trailer to eat and drink and relax in a bit before vetting then took a peppy Chief over for a check of mostly A’s, with a couple Bs on hydration indicators.

Loop two was even flatter and we made good time cruising along still in our pocket. Chief was in his element and drinking deeply when offered at that point. I did forget to repack carrots at the lunch hold, it really is such a great gut/parameter bump to keep feeding those little quarters into the slot as you ride, or stop for grazing breaks. Some of the second loop skirted Camp Far West lake itself and there were a few spots that showed the lake levels had clearly risen in the last day or two, as the paint markings occasionally disappeared into mostly shallow water then visibly resumed farther along the shore. I knew the lake shores to be muddy and deceptive so I skirted all of these, but witnessed a particularly deep “crossing” from afar: three riders approached the newly underwater area and leaped into it with seeming abandon, somehow seahorsing it across intact, though all that attempted it that day weren’t so lucky. It was quite a sight. The ride manager encouraged everyone that night to skirt such issues should they come upon them again.

I wanted to pulse right through at the Finish and was enjoying the evening so we meandered in the last couple of miles, I hopped off to handwalk the last half mile, and we came in to a 56 BPM and A Overall finish. J’s other horse completed the Day 1 LD and showed for BC to round out a good day. My Day 1 completed card was my vet-in for Day 2’s 55 miler and after mashes and dinner plates all around it was most definitely bedtime again. 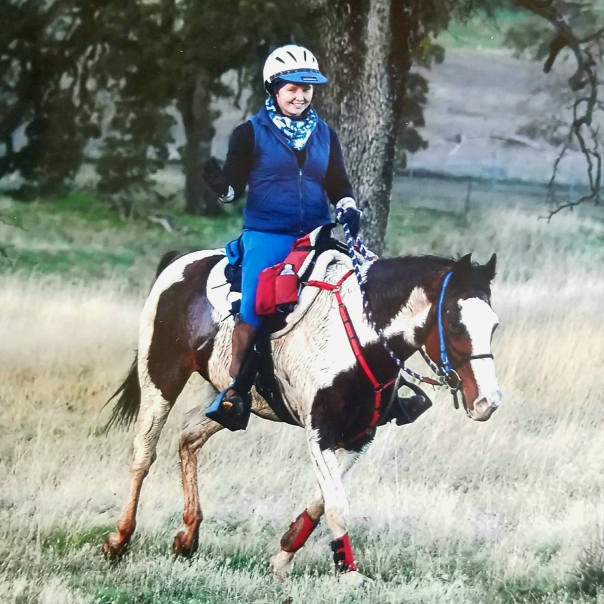 Day 2 found Chief just as eager as Day 1 and I’d resolved not to head over into the start area chaos so early this time, so I mounted more like 6:15 and warmed up on the far side, heading for the start once the trail was open. It was another sublime NorCal winter morning and Chief and I settled in with our Pandora tunes softly playing for a slightly slower day on trail. It was Day 2, 55 miles were to hand,  and steady was the name of the game more than ever.

After some eyebrow raising encounters in miles 1 and 2, 4ish miles in a polite and friendly rider approached us from behind, under control, and asked if I minded if we cruised along together. I had no objections, my caveat always being as long as the horses are rating well, and we proceeded to ride almost the entire first loop together, chatting amiably. It was nice to have some company after flying solo Day 1 and the horses rated well together until we were almost back to camp when the larger more forward mare riding her first day naturally forged ahead. Chief was definitely quieter 20 miles deep into Day 2 but got back to yelling as we approached Ride camp for the 25 mile vet check. He pulsed right in and I settled him in to eat and drink for a bit again as we had done successfully the day before. I snorfed down some delicious turkey wraps from Chief’s crewing parents then headed over to vet in.

If you haven’t seen that thoughtful look on a vet’s face after returning from your trot out before, well, I hope it never comes to pass, but it probably will. It’s not an Oh Hell No look, it’s a Hmm, Did I see Something? look, and it was on Dr. Jamie Kerr’s face after Chief’s trot out halfway-ish through day 2. He said that he thought he might see something in the front end and he was going to have another vet take a look after we finished the rest of the vetting. As Chief’s otherwise great scores came in, I felt a tiny flash of but the points.., then my better self kicked in and even as I trotted again for two vets, I knew I was Rider Optioning if I wasn’t pulled. Chief had history of a front leg injury a couple of years ago and though in the moment I couldn’t even remember which front leg it was, “front” was enough for me. There was absolutely no way I was going to risk a horse for a silly human goal. Dr. Kerr gave me the Okay to continue after re-check but I went with the R.O–L and put a peppy and yelling Chief back in his pen, job well done for the weekend.

Chief post RO, he was pretty sure he could go catch his buddy

Doing the right thing doesn’t always taste great but it’s the flavor of life for me, or so I try to make it. Chief went home sound and happy, J’s other horse finished the Day 2 LD in style with her aboard, showing for BC again, and overall it was a really enjoyable weekend. The points goal will retire quietly to it’s shadowy grave, here are the stats that really matter to me in the end: 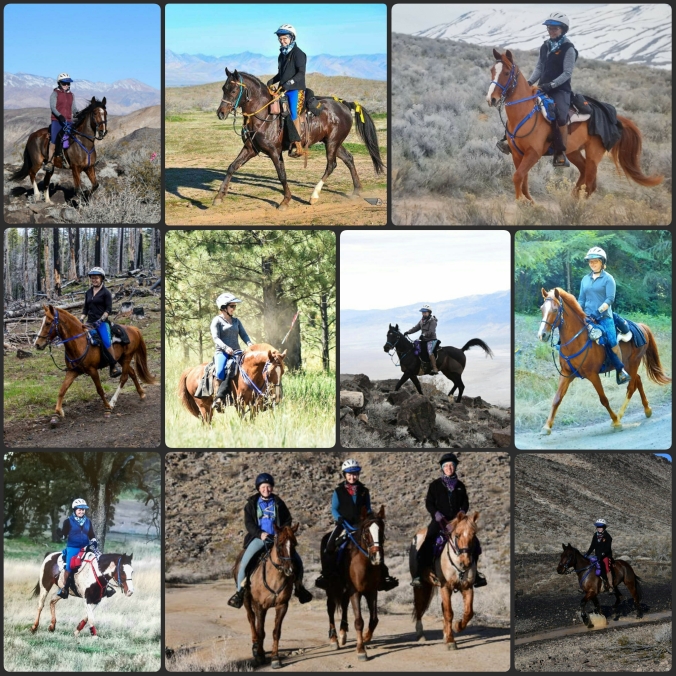 Thank you to all the owners who trusted me with their equine partners, to all the great horses that carried me, and to everyone else–see you next season!!