My husband made it home early yesterday and I suddenly found myself with a few free hours and a truck and trailer already hooked up and loaded–what could I do but grab a horse and hit the trails! It was way past Blaze’s turn to get some time out without ponying a greenie so I loaded him up and went for a nice 10 mile ride at the lake by my self. It was peaceful and actually refreshing to ride Blaze who, while very lofty at the trot and as such not super comfortable, is extremely responsive and light in the bridle and doesn’t have the “No, I know better” initial reaction to my every request, like a certain white mare we know. I rode him in his S hack which means he didn’t collect worth a damn but being a little snorty at the trails he hasn’t seen in a while kept him rounded and in decent form most of the time. 😉   I can almost think where I want him to go and he does it, now if I can just work him over some cavalleti and get him picking up his front feet better THAT would be good. He’s actually better with his feet than Desire in that he does look for the best line to take on a trail instead of just blundering forward over whatever is in front because he Must Win the (nonexistent) Race, like D does.
They call him Slim Jim.. 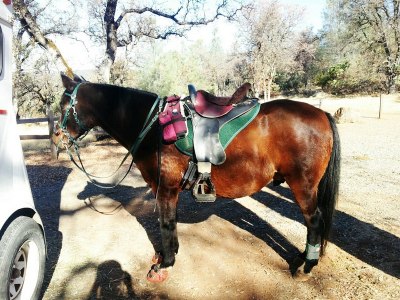 I just love the picture below. Someone on Facebook commented it looks like he is folding his hooves and saying a little prayer before he drinks, haha! I was thinking he was clicking his heels together in hopes of whirling back to his paddock and avoiding the workout that was to come. Either way, he is very cute and like I said, not the best with his front feet…Yes, he is standing *on* himself, he does that sometimes. 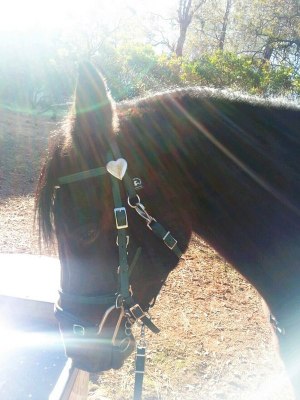 You can hardly see the neck for the winter coat! 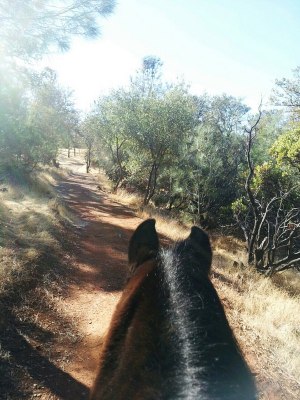 We did the same 10 mile loop Desire and I did with N on Saturday, but Blaze and I cut an hour off the time without even planning to, just having a good time and some nice trots out on the beautiful fall lake trails.

There is a night of rain forecast tomorrow but otherwise lots of sunny, cool, ideal riding weather in the forecast. I’ve been having lots of familial drama in the last month but my mom is finally able to break free from her coastal obligations and come visit later this week, so I’ve taken her up on that opportunity instead of going to the Lake Sonoma ride this weekend. I was pretty ambivalent about Lake Sonoma to begin with and sometimes you just need to spend some time supporting and enjoying family. There *are* some rumblings of a redhead Death Valley adventure in December, however! Stay tuned.

4 thoughts on “Blaze-in the Trail”