Apache has been with us for 4 months now. This tiny adorable horse encompasses so many quality life and training lessons for me that I have to seriously marshall my thoughts both to work with him and to write about it. He’s a wonderfully complex character, let me see if I can explain why:

What Was, What Is: I certainly didn’t rescue Apache, he came from a lovely endurance couple in Oregon who entrusted him to me, after not having great success with him but diligently trying to find him suitable placement for months. As a well bred, well built, handsome little fellow, he has in 10 years had no less than 4 homes (and probably more than that). He was bred multiple times early in life, before testing positive as a SCID carrier and being gelded. He came to me as Having been Ridden, but with very mixed results (a hoped good trainer gone bad, and both of the couple getting bucked off thereafter). He is a horse that internalizes, not reacts. The best way I can describe it is that he stands and takes thing when he’s not okay, where my Haat Shaat horses absolutely won’t stand and try and take things *until* they’re okay. And by okay I mean in a suitable frame of mind to encompass human shenanigans and learn things, a mental space generally accomplished by them voluntarily moving their feet and blowing off some steam.   Apache is on self imposed lockdown, in a way. It’s fascinating and different and sad and I love him.

And that’s why I ate dirt 🙂

Thing is, what happened in the past doesn’t ultimately matter. What you think might happen next year *definitely* doesn’t matter. What we grasping humans have to wrap our heads around is the *moment,* the right now, the animal before you and what it’s presenting. In my past experience a horse standing, trying, meant acceptance and move forward. In this instance my gut said Mmm, Really?  (don’t ignore that gut, right!) but my human brain, flashing back on what he should know and what this might mean pushed me onward. It was the third time I’d been on his back, but the other times were bareback, in a halter. That day was his first day in a saddle and breastcollar.

The thing about Apache is that he ticks the boxes on what you ask quite quickly, okay, different speeds in each direction, facing up, etc. Then he shuts down and forces himself to be okay through the next step, and the silly human pushes her luck and gets lucky–just a scraped knee and a bit of a bruise on the back after the impressive HOLY CRAP ACK! buck he threw about 15 seconds after I’d quietly mounted. I moved his feet after that, probably all told another hour at least, more groundwork but definitely not getting on again.

I was interested in my reaction to getting bucked off, since I’ve been life flighted from being dumped after mounting before. I’ve worked off the residual fear over the last few years, and this time I felt only ashamed of myself, and spurred on to unlock this horsey mystery and get it right. Telling my dubious but supportive husband I got dumped was another test–and he took it quite well! There’s something in the stars for this horse, I tell you.

but it isn’t a Cashel fly mask..so much for Arab size!

My long lines arrive just in time for our next session. I consulted heavily with my favorite horse experts regarding my mistake and how to proceed, and we generally agreed lots more ground work and exploration of precisely *what* set him off was needed. I can see a general lack of connection from his head, mouth, neck, to body, if that makes sense. As if his body is one entity, and his stiff neck and head another, and they aren’t quite all communicating together. And my trainer’s voice tolls in my head when I type things like that: “Work them til they look like something you want to get on” No, the ticking time bomb of apache wasn’t something I wanted to get on, but I felt that I should, and he should, and well why aren’t we darn it, impatient foot stomp. Well you know how that went.

new splint boots, new driving lines…yawn…boy is the potential there..

Now *this* was a good session! We started at liberty, went to the line, then spent a while flapping the long lines all over him, ran them up through the surcingle and let him drag them, and finally went to baby attempt ground driving.

He had started wanting to stop and face up when I was jumping up and down and climbing and doing general tomfoolery, but my trainer said he needed to be okay moving his feet through that, so we worked on that as well. Basically no freezing and shutting down is the goal with this one! 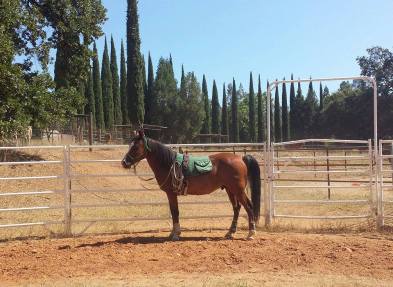 The lines on his flanks made Apache shudder, the notion of me being behind him made his eyeballs bulge, and the encouragement on the lines to bend a little, Left, right, turn, stop, made him freeze and glare at me. At first. Slowly, calmly, quietly, using all the building blocks of queues I eventually will when it’s an appropriate time to be in the saddle, we made it a step and squiggle at a time until we had driven a nice circle, stop, direction change, and circle in each direction. Deep, deep breaths all around. No, he still didn’t look like a horse that I wanted to get on. But one that I wanted to spend a lot of time on, and be better for, and take a journey with. 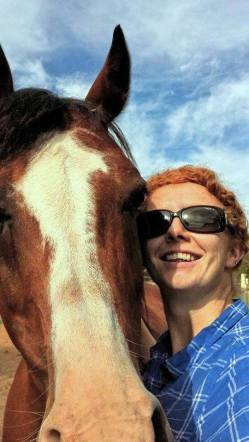 Aside from probably 6 hours of groundwork put into Apache this week here and there, life has been gloriously busy with trims, boot clients, selling Spark for his owner, managing the rest of the herds and acreage–and celebrating my husband’s birthday this weekend!  We did some multi  tasking yesterday, hauling Farley to the lake to help out Mel then popping over for some dog adventures and fishing. 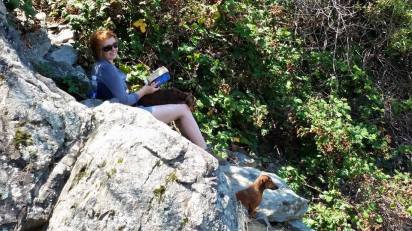 New Shepherd pup Jazzy continues to grow and thrive with the pack, and little miss Rory’s 2nd birthday is *finally* next week! What a big goober she is, can’t believe she’s still so young. 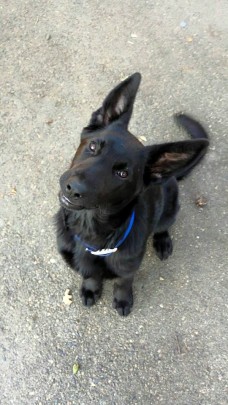 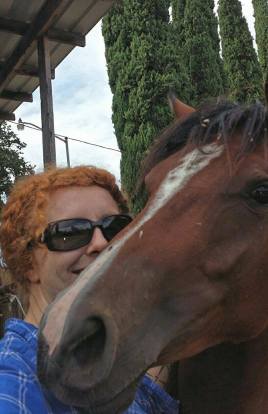 2 thoughts on “ApacheWorld: Dirt and Lessons”