This was my fourth year crewing Tevis and as ever there was much to see, plenty to learn, and lots of strategic waiting to do. The weather also threw a nice curveball, as Tevis is always hot but this year it was literally raining en route to Robie, as well at Robinson Flat on Tevis morning. Eventually the sun came out and upped the humidity factor nicely, too. If it wasn’t a big tasty bowl of challenges it wouldn’t be Tevis, right!

raindrops into Robie–found my rider, “chasing” her to camp 😉

the mighty Rushcreek Seth, attending to his vittles 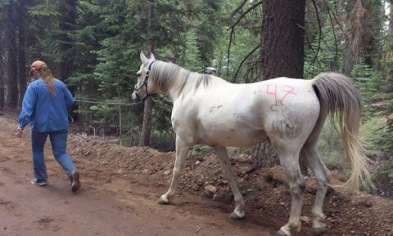 This year there were 10 Rushcreeks vetted into Tevis on Friday, here’s a fun group picture. Also interesting to note, 50% completed, in accordance with overall Tevis completion average.

I did my usual gathering of crew bags (including Dr. Lydon’s this year), dialing in of rider wishes (what do you want specifically met with, tack/clothes changes, highlighting small details not to be overlooked), and met my crew buddy. It was still impressively cool and grey as I headed back down to Auburn to my old friend Motel 6–aaand promptly proceeded to lock my keys in the truck while shuffling gear. Fortunately I’d just devoured a #2 Animal Style from In n Out so I was chuckling instead of raging when I called AAA. That was sorted out easily enough and before I knew it the alarm was pinging in the wee hours and it was time to head for Robinson Flat! 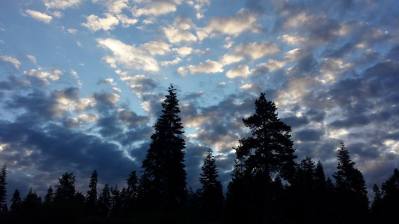 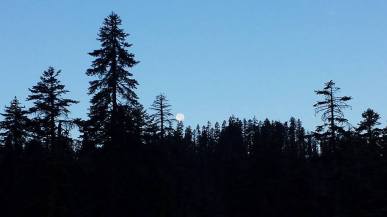 I’m always in the first fleet through ..

..so we get a nice shady near the road and bathrooms

guestimating off last year’s time, we were ready with the cart. time card and in!

always good to check full protocols if you’re a meeting skipper like me..they needed a Pass or Recheck blood draw card as well as time card 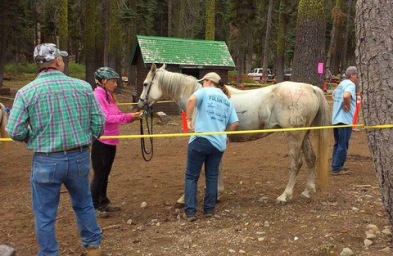 Seth is a typical Rushcreek trot-outter: “why human, this is stupid”

And a fabulous RC eater, of course 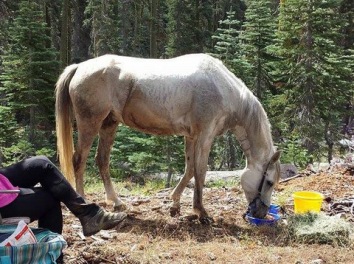 after a panicked “we need what sort of extra card to leave?!” (blood draw) sprint

Finishing up at RF means cleaning up your mess including hay, and it’s a good idea to bring your own trash bags as they can (and did) run out.  We piled gear in the wonderful cart–every Tevis rider should have a crew cart, really, and I say that having crewed a buckle entirely solo with no cart— and we headed out, picking up someone else’s abandoned crew member along the way.

Foresthill parking lot was crowded, sunny, hot, humid–pretty well true to form, and I blessed my bright orange truck again as a crawl around the parking lot looking for a parking spot/sliver of shade resulted in truck recognition and being taken in under a boot client/friend’s awning and sweet trailer set up. Thanks again, W!

grey skies again as Laura rolls in around 730 pm 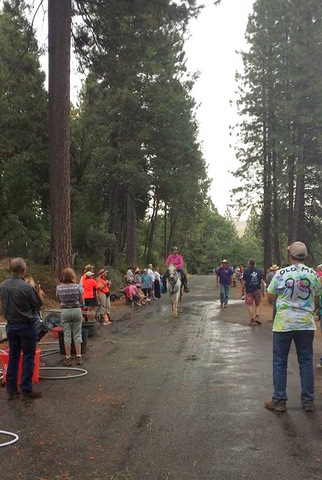 Foresthill trot out, Seth says “this is still stupid..”

Seth continued to eat and drink nonstop through the Foresthill hold while our rider rested and freshened up, then about 8:40 it was go time again.

This was the latest I (or my rider) had left Foresthill but all was in good order. After giving another buddy a ride I headed over to the Stadium and spent about 930 pm til 4 am switching between refreshing the Tevis webcast, chatting, and napping in the bleachers under a horse blanket. I made sure Seth’s stall was freshened up with vittles and poo removed, then closer to time brought the cart down to the Finish crewing area with hay and a mash pan and blanket ready.

In a bit of delirium and with the stadium announcer tiring I didn’t even hear or see Laura come in and do her victory lap, for all that. There is video (trying to add it) and he looks great trotting loosely around the stadium and under the banner. In the crewing area, Laura hollered at me where I was apparently sleeping with my eyes open and I snapped to it and whipped off tack and we headed in to vet. 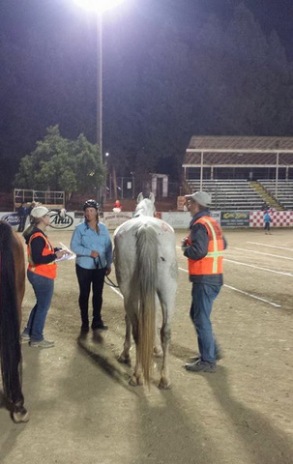 …and then Seth looked a little funny and we needed to recheck.

You could have knocked me over with a feather and I was doing my best imitation of a guppy fish at that point. We’re a low key team especially based off our success together last year, so I didn’t even have a cooler of ice to hand to get ice on his legs (lesson learned!!), but fortunately Laura has many friends and some ice wraps popped up pretty quickly. Begging pardons and with pleases I reestablished how much time we had left to recheck and she went for it–and sure enough Seth was slightly off on the right front and they were pulled at the Finish. While he did look good trotting in, once adrenaline wears off sometimes things are revealed, and that was that.

So now you know why the title makes sense. I think Laura said it best, classy and realistic to the end, so I’ll leave you with her message:

“For everyone who thinks I finished Tevis…I actually didn’t. Even after crossing the finish line after hundred miles, horses are required to be sound at a trot to receive a completion – and Seth was off on his right front. There’s a video that Jen Smith has that shows him trotting his victory lap and he’s not unsound at all. Sometimes things like that happen. It really sucks, but you know, if this were easy, everyone would do it. Thanks for all your support and best wishes.”

P.S. Seth is looking and moving great, picture by L as of the a.m., vacuuming up his vittles and bright eyed for the next adventure. Safe travels East, my friends