Kenny and I pulled out Friday morning with an easy 2 hour drive to ride camp ahead of us, and rain forecast for ride day. Our buddy W and her stallion Aqua and co followed us up to ride camp where we got cozy in the limited parking quarters. Fortunately I was literally surrounded by friends on all sides and those I didn’t know were very friendly, too. Don’t let endurance Facebook forums scare you away if you’re new to the sport, there’s a lot of great people actually out doing it. 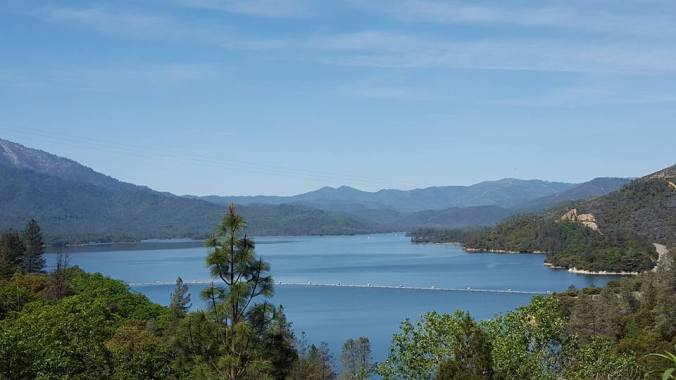 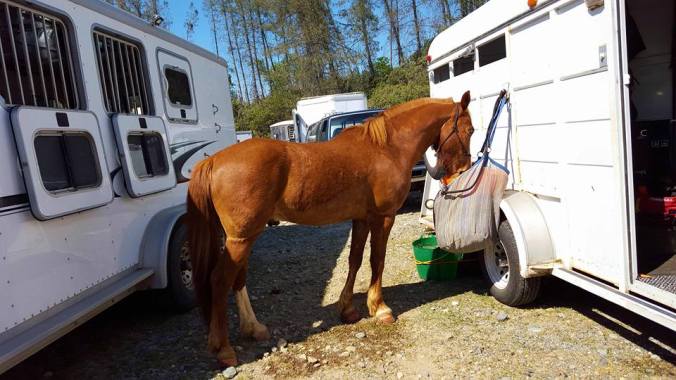 Kenny settled into camp nicely. Our months of endless mucking about with boots and tack before, during, and after rides and his non Arabian steady keel demeanor mean that he has Hang Around and Consume down pat, even with a trailer right up his rear end. Good pony! 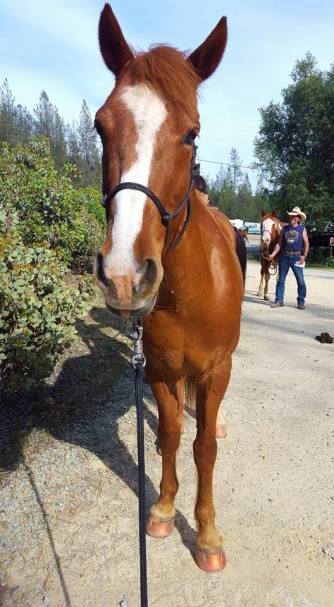 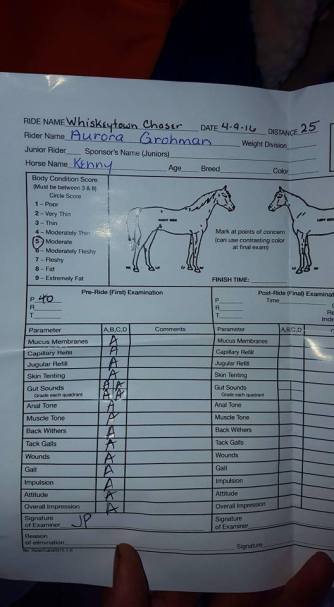 After a great vet-in, lots of boot help for folks, a delicious steak and garlic bread (thanks W and fam!) and Kenny leg stretcher walks sprinkled in between, it was bed time in no time. 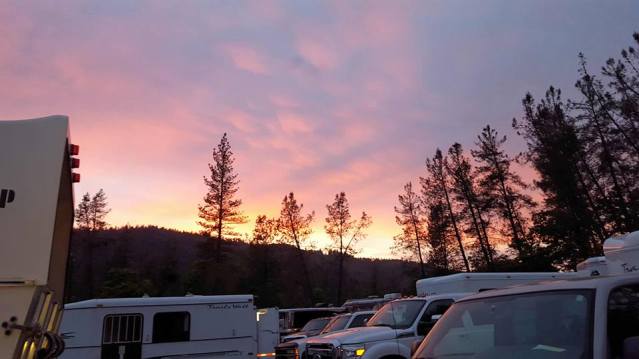 Kenny continued to eat mash and hay, mostly drink at the troughs on walks, splash idly in his water bucket at the trailer, dot the landscape with poo (retrieved!), and pee his brains out–no really, our little camp was a urine festival by the end.  His one and only sin in this, his first camping and AERC event, was a tendency to call when his neighbors left for walks, or if I walked him by his old pasture mate, T’s mare, who was *very* happy to holler back. A pretty minor offense and he certainly wasn’t yelling endlessly.

but here he is whinnying in the morning 😉 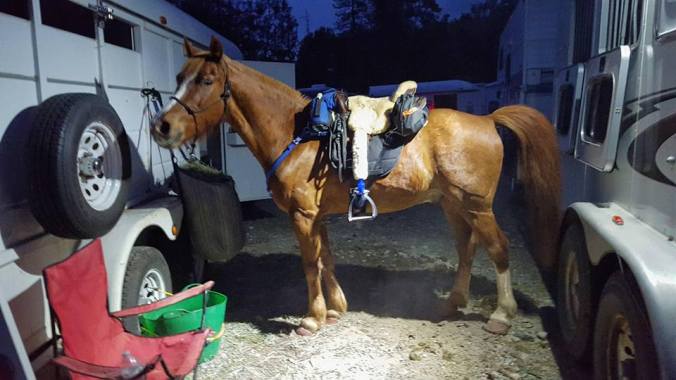 Ride start was 6:30 AM and the 50s and LDs all started together due to single track scheduling farther down the line. T and I, having ridden a 19 mile training ride together a few weeks previously so comfortable in our horses’ pacing together, waited 15 minutes after ride start and strolled out of camp on loose reins at a walk–YES!! 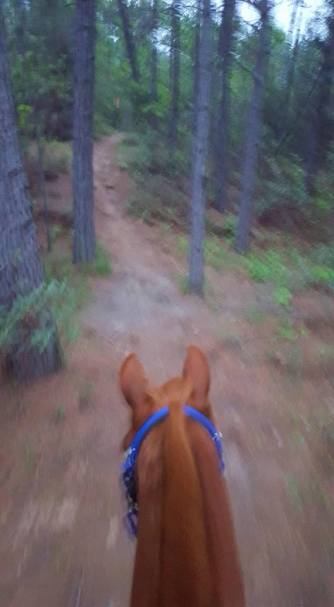 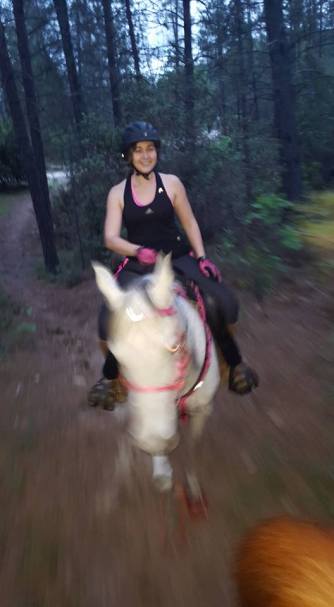 Kenny proceeded to lead pretty well the first 8-9 miles at a steady trot, the friendly footing and coolish but humid morning encouraging us to make time, and a breeze, when the going was good. The trails were well marked, there were water crossings, a few mud bogs, and plenty of bridges of various shapes and sizes. Through it all Kenny bravely tromped! 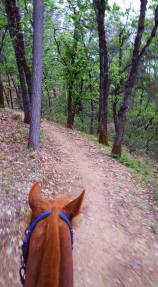 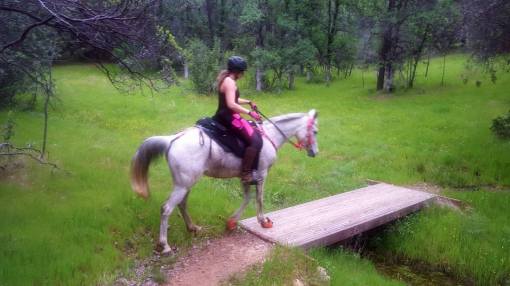 bridges of all sizes to cross 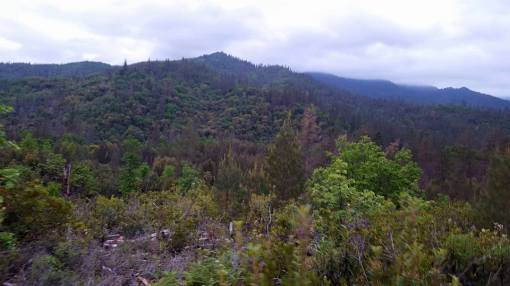 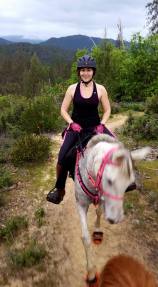 T took the lead some as well, and in no time we were hand walking in to our 13 mile hold. Kenny pulsed in at 48 and all A’s!! Knock me over with a feather..I never mean to imply I thought he was unfit for this ride or I wouldn’t have done it, but I can’t say enough how impressed I was with this little fella and his demeanor and scores for his first event. 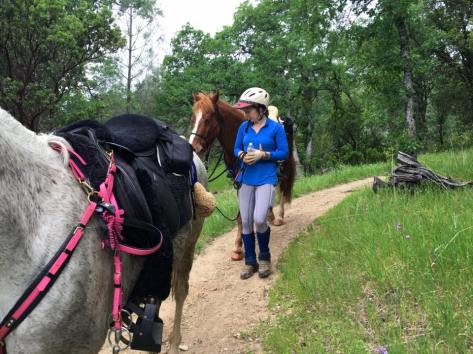 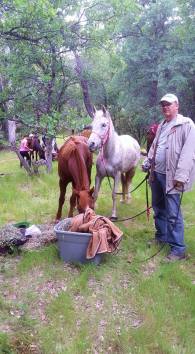 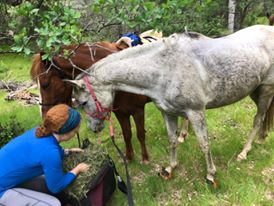 snack time for all

After the hold we headed back out for the main climbing portion of the LD which happened to be the  trail that I had tried Kenny out on before bringing him home. The humidity dropped to actual cool rain drops, mist mantled the reaching views, and flowers in various shades decorated the green that filled our eyes near and far. It was truly a glorious day! 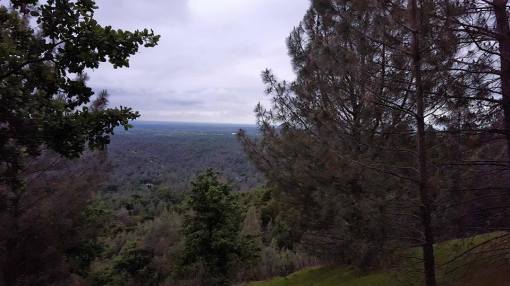 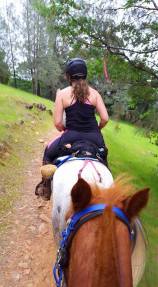 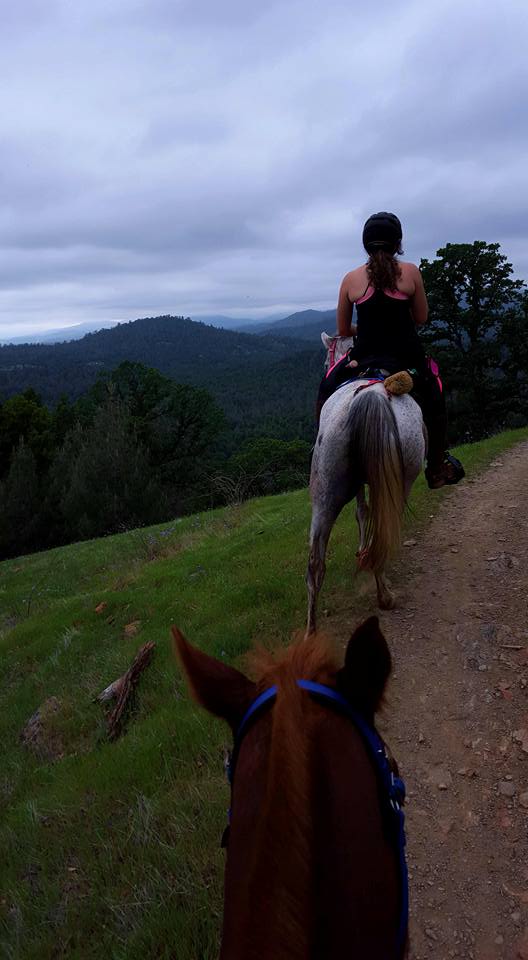 Kenny had a moment or two where he seemed to flag, but it was inevitably tied to his need to stop and poo. I’ve ridden horses that poop and trot without hesitation, those that slow to the walk, and a few who need to stop and poo. They may learn to poop on the go or they may not, but I absolutely would rather stop and let the horse expel than allow momentum or anxiety carry them along. Better out than In, I always say!   for the Shrek lovers out there.

Kenny said No Thanks at the water trough before leaving the hold, but YES PLEASE to a volleyball sized puddle off the side of the trail heading back down after a climb. Ahh, the teaching moments of mileage! 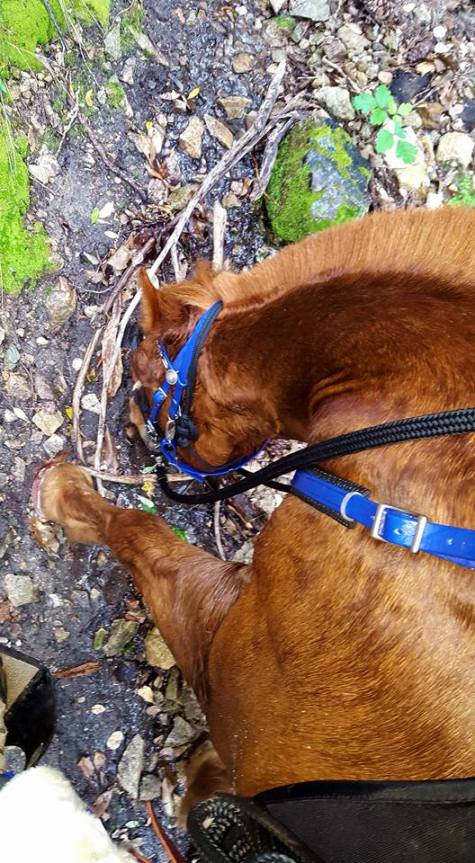 T and I did some downhill jogging on foot and were merrily cruising along when 2 riders behind us delivered a reality check, “There’s 20 minutes left to Finish!” Umm…errr…and at least 5 miles? The humans were flustered but the ponies seemed to get the memo and we were off and trotting in good form, until we honed in on and splashed into a water crossing, missing the sharp Left the trail took right before the water. We had a totally flipping glorious cavalry charge up the short hill after the water (the power in this pony–woah!!)–and reined up at the top to see no ribbons. Our return down the hill was slightly more sheepish than the summit, and we followed the correct course back over across the gravel and onto the really fun and fast footing of the Canal trail, ironically the same trail, just the reverse direction, that I had jammed over 5 years ago on Blaze trying to not be Overtime.

With zero leg applied, balance in my seat and very few Straighten Up reminders needed, Kenny flew behind T’s mare through those winding trails, picking up both leads of the canter of his own accord as we literally laughed out loud. We were nearly certain we were Overtime but we had so much horse left and it felt GOOD. 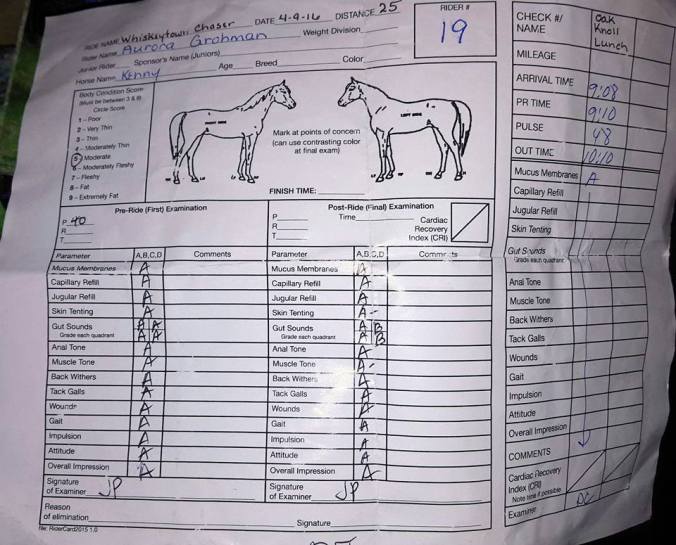 Kenny took about a minute to pulse in on arrival then we cooled our jets as Overtimers til the vet had a moment to vet us out. Great scores again and a solid trot out with as much overstride and reach as he started with. BAM! 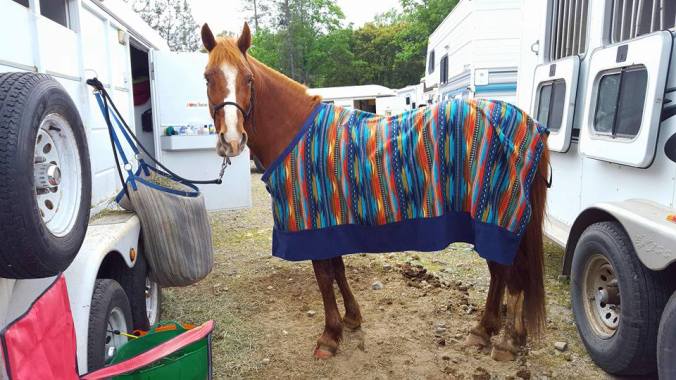 and back to eating

I was disgruntled for maybe 5 minutes on trail with the revelation I was going to Overtime this LD again, but aside from that moment of ego I really just had a blast and was thrilled with the reserves Kenny managed, used, and had. He marched around on evening walks post ride even faster than pre ride, jumping into a trot if my pace quickened at all, and sometimes if it didn’t, coz Pony, ya know? I loved it.  The taste of a well ridden ride got even more delicious when some hold time discrepancies revealed that those finishing within 30 minutes of the declared finish would in fact get Completions–we rolled in 10  minutes late and little Kenny is on the books! 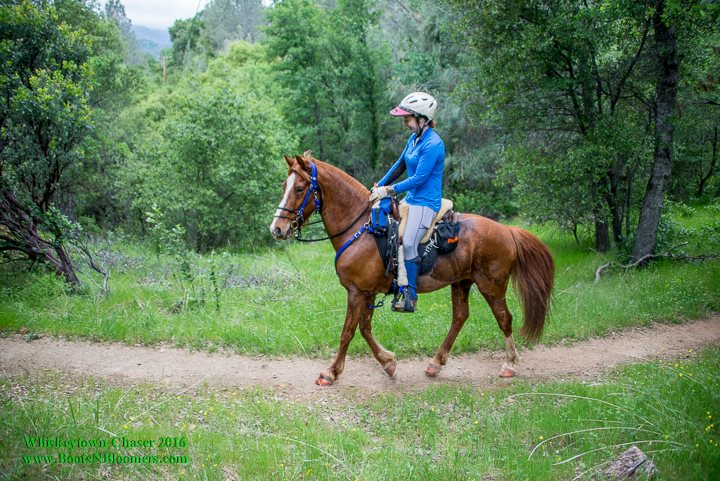 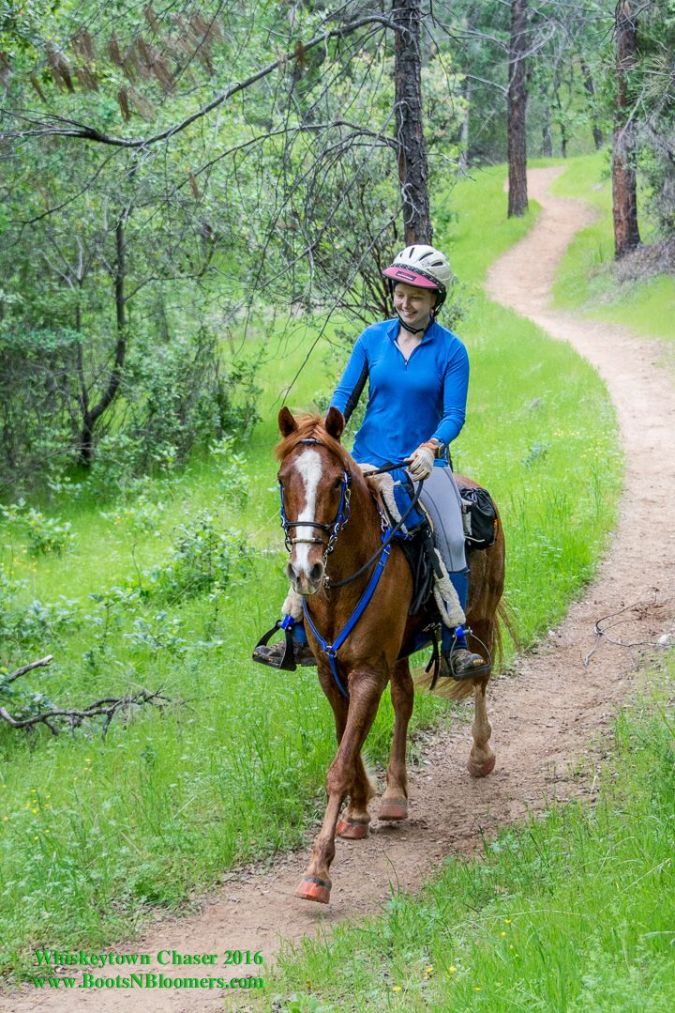 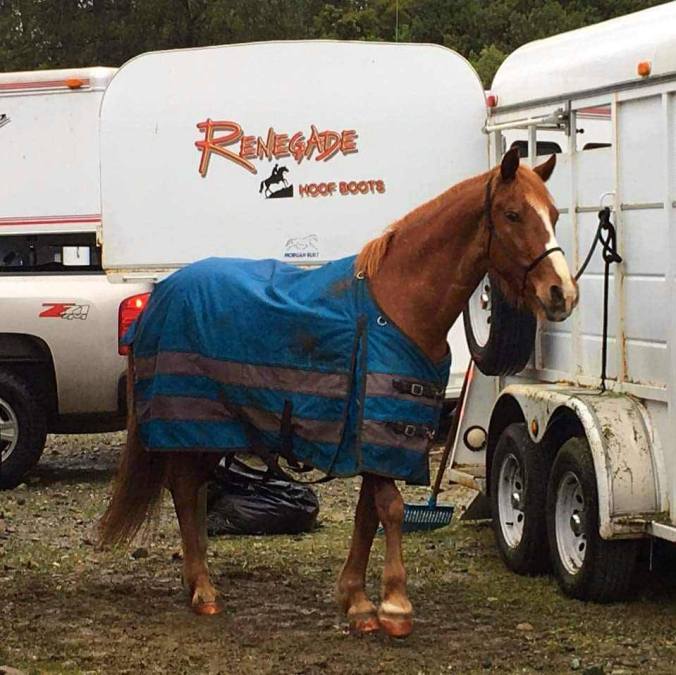