I was kind of a hot mess come time to leave Thursday morning.  I have a tendency to persevere, which is great, until I’m tired and suddenly experience the whiplash of changes made. My last ride was Mojave Day 1 50 this past February on Scrappy, still in the fix-the-intermittently-sore-back war, with my faithful crew dog Georgia, in my good Ole Miley straight load. As I was leaving for Wild West I suddenly realized, as it were, that I was leaving an ailing Georgia, in a new to me rig ,with a horse that wasn’t mine…and I wondered what I was doing. That may sound overly dramatic or emotional to some, but if so then you haven’t invested years of thought and love into something and failed, over and over again. And then tried again.

So!  I shelved examining what I was doing until I was actually seated in the shade in ride camp next to a munching horse. My husband was kind enough to make the short drive up to camp to help us get settled but  I still felt nervous as all get out on arrival. I suppose that was somewhat emotional turmoil, plus a little physical anxiety from not knowing much about Sparky except that he’s large, opinionated, and known to buck at ride starts–but then he was quite reasonably doing his job of the moment (EDPP, be sensible at the trailer, repeat) so buck up Ole girl, my mental Marshall said. Don’t borrow trouble, it’ll find you again soon enough.

I was dead set on getting Sparky out for a pre ride Thursday and turns out that was wise since I discovered after the trim I’d done a few days before he was really more of a size 0 boot than the red 1s I’d used on him last. That’s why we bring the goods, eh! Why not start a multi day in boots he’s never worn 🙂

He got salted mashes, no electrolytes. DrankDrankDrank all weekend. PHEW!

vetted in in 40s, all As, 2 gut quadrants Bs throughout the whole weekend, BCS 5 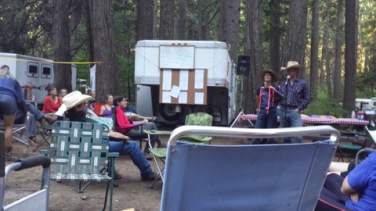 ermm, don’t quite have big enough blankets for this one!

We had a camping neighbor the first 2 nights and Spark or the mare would call when the other left, but nothing obnoxious. When that gal left we were pretty well on our own for close horse buddies but aside from calling to all the chestnuts that passed (and his soon to be buddy Confetti), he was a good solo camper. Another PHEW!

Camping with my gooseneck was glorious with the exception of a couple of the trailer rattling sounds that prompted high speed exits from sleep up, out of bed, down the tack trunk and out the door before I was awake, shod, or bespectacled. I definitely banged myself up more on the trailer than the horse. Phew? I think so! I totally failed at the photo of my cool shower set up, but basically I slapped removable magnet fishing rod holders like these (thanks husband!) on the roof of my trailer in the horse area, set a strung shower rod/curtain up on there, and had a perfect shower stall. The trusty Coleman Instant Hot Water heater then gets set on top of my $5 pickle-turned-water barrel, pump into barrel, and viola, private shower so hot I said Ouch!

Day 1 LD, 30 miler, went great! We marched out of camp on a loose rein and soon paired up with a mule; there were some stern words between riders and their respective mounts but nothing untoward and we finished the 18 mile loop in about 2 hours flat. Spark had a good drink and ate the carrots I had on board, pooped and peed, and came into the 30 minute hold at 52 bpm and As.

He slammed down a salted mash, carrots, hay, I gobbled a tuna packet, and we headed back out alone for a much slower loop. We did nearly the entire 2nd loop alone and marched along eyeballing shadows, I did some hand walking and again didn’t bring enough carrots, and he continued to tank up water like a trooper. The one time I let my managing guard down he bee bopped sideways at a wooden No Biker log/sign thing on the ground, which ejected me but I landed on my feet, mounted from the sign thingy, and on we merrily rode. LOL. It came to me early on that riding Sparky is like riding an octopus with the attitude of a teenage boy, and my trail companions of the weekend and a few who know him seem to agree it’s apt. A very talented and athletic octopus at that!

fun and varied terrain and views on Day 1 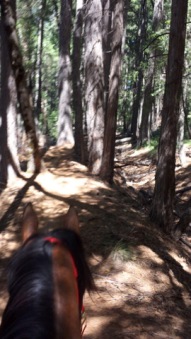 thumbs up for great trail marking! 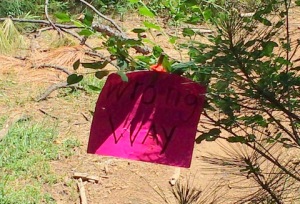 A few miles out we came upon and finished with boot buddy M on Haflinger Confetti, her friend, and the mule. We finished 2nd to last, 47 bpm, A’s all around except for the same B gut quadrant. He was still spooking at upside down saddles as we headed for the trailer and was marching around and bright eyed through the evening– So we got another LD vet card and said let’s do it again! 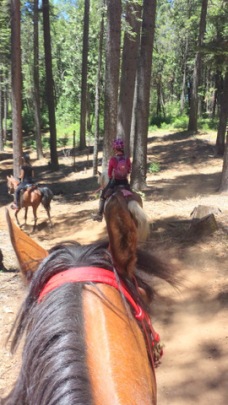 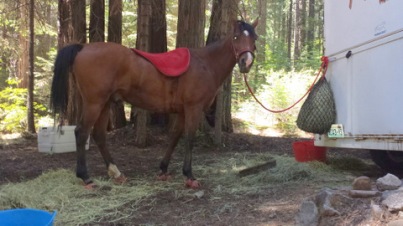 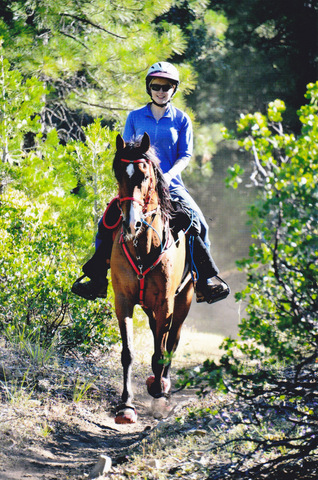 working on building those meaty cheeks 😉 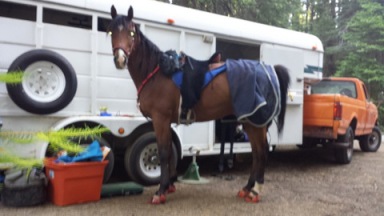 heading out with ride partners M and Confetti 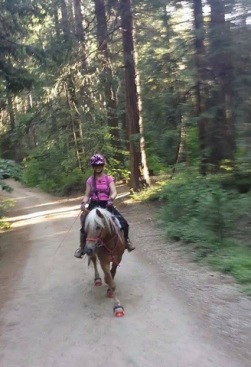 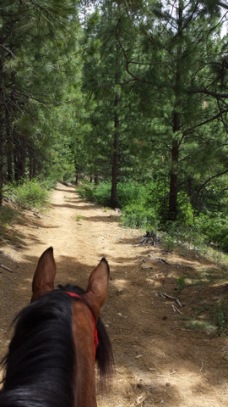 After perfect boots  day 1, my last minute Oh, Hey, I need to use smaller hind boots realization bit me once on Day 2, on the stream crossing+steep uphill combo, where Sparky just slid right out of his hind boots. I popped them back on and that was the only issue for me all weekend. I consider that fair since those boots were last minute untested change up, and I actually think I’ll pop him into hind Vipers as the fronts performed so flawlessly. Hind Vipers also passed the challenging Confetti’s testing for Day 2, which was great to see.

lunch vet check, same pulse and grades as before, tanking up 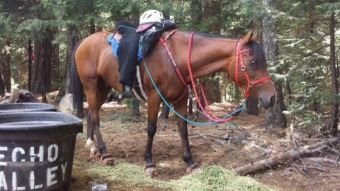 I LOVE this picture!! Blogger and Renegade booter power!! 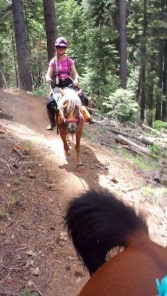 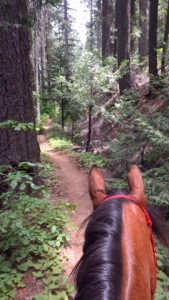 We cruised into another nearly last place finish with time to spare and the same great grades and that was that! Sparky looked exactly the same from the minute I pulled him from the field Thursday am to returning him there this morning. While it was a bit tiring to ride, it was pretty impressive and rather thrilling to ride such a clearly gifted and enthusiastic athlete! I am proud of us both and grateful to Sparky’s mom C for this opportunity.

muahaha, I was a bit tired from his enthusiasm at the time..

then Mel shared this photo of those emotions swapped, LOL!

There’s rumors of a nearby 50 coming up next..