I felt quite a bit less of a mess leaving for this ride. No doubt a combination of having now been through a multiday with Spark so I had some clue what to expect, and the weather being gloriously cool, instead of endlessly 105 like before Wild West. In fact the weather felt so glorious it decided to dump very real rain on Sparky and I as we prepped to leaved leave. Cue shivering horse! We can fix that..

It’s a now very familiar route, out past Auburn and Cool to Georgetown and we arrived in cool skies early enough to score a swanky corral. We were settled in with our rider packet by 2:30.

Friends started to arrive, then as I was tacking up for a pre ride I heard sirens and it was soon reported that a man driving while on a cell phone had hit and flipped a horse trailer nearby. The horse was taken to the vet and all ended up being okay, But wow. Could be any of us, at any moment. 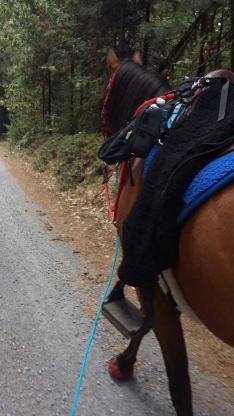 Sparky vetted in with all As and a 40s pulse. He had about a dime sized patch of hair that rubbed off under his saddle pad on our last shake out ride (where he was moving like a cheeky rocket fueled 3 legged camel), but had not been sore or perturbed by it at all, so I had resolved to nurse it through with slicking/powdering agents, making sure the vet noted it ahead of time. Spark was in pro mode for that bit, eating and drinking everything around and settling in next to a corral neighbor.

settled in, I discovered Sheza’s new cooler is the only thing big enough for him 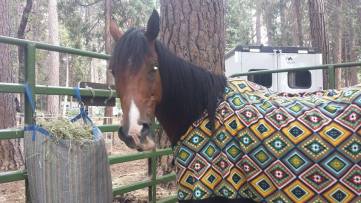 If nothing else went quite according to plan in this ride, let me say that the camping part definitely did. Pulled in, had a corral, gave the horse hay and water and that was that. No tent? no tarps? I still can’t get over it, and with the cozy pre-made gooseneck bed and Sparky stashed in a corral overnight– the 5 am alarm was actually needed, shocking!

You may notice this post is slightly short on fabulous photos, and that can be attributed to one: shady camp lighting and two: riding a rocket pony. Getting a bit caught up in the last of the pack leaving camp early on, this is all I saw of the first 12 miles: 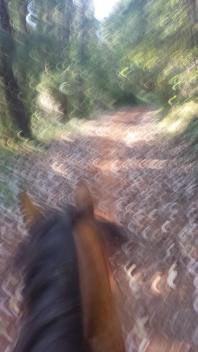 The morning loop was out to the airport for a 12 mile check, 30 minute hold, then back to camp. That first 24 miles had some pretty legitimate challenges, from a downhill start to plenty of gradual climbs but also some short but VERY steep ups or downs, so much so that I was clinging up like a monkey then had to reposition my saddle  a few times, ever worried about that little hairless spot. Still, we zoomed into a humid feeling 12 mile check pouring sweat, with Spark at 72 bpm. Except in another minute he was 54 and then his CRI was 44/46 and all As. He wouldn’t drink yet but he ate the entire hold. 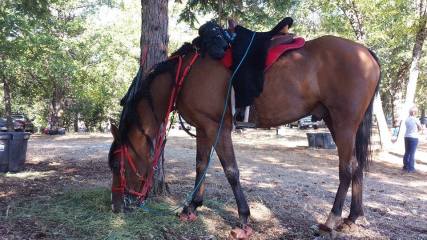 Some borrowed baby powder assuaged my concern on the hairless spot, some kindly provided delicious fruit calmed me down a bit, and off we went back for camp, briefly joining another rider but getting left in the dust by that mare’s crazy uphill talent. I don’t ride to hold Sparky back but my compromise is always travel in such a way that we both stay vertical and okay. I didn’t entirely win that bit in the end, but mostly..

a brief moment of walking.. 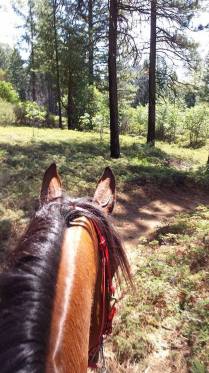 Spark started drinking at about 18 miles and never stopped from there on. He vetted through great again at the 24 mile mark, with the hairless spot not at all irritated and grades groovy.By this point I was a bit sore in the neck and shoulders from the nonstop, errr,  enthusiastic way of going, so here’s a quick shout out for Icy Hot Pain Relieving Cream. I don’t remember buying it but clearly I did, and it’s great stuff. (By the way, looking for something to link to there, I saw there’s No Mess Applicator options, which might be good. Since I live doused in sunscreen it just another sort of goo to be covered in.) 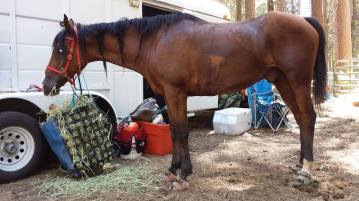 About half of the 2nd 25 mile loop I called Aurora’s Glorious Revenge. This was where the horse who jammed through 2 LDs recently and had just jammed through 24 miles–thought he was done. And wasn’t. And had to leave camp again. Through the scary trees. Alone. BUAHAHAHAHAHA. I admit to savoring it a little. 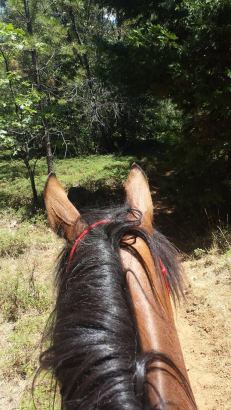 We did some good flying on the easier parts of that second loop, had to do a fair bit of walking on narrow trail or awkward bits (you just can’t pilot a 15.1 hand spooky dork through narrow trails quite as handily). The ride photographer was out there literally hiding in the trees, so he may have gotten some exciting shots of us spooking intensely. Eventually, we got to the 40 mile vet check. By that point, somehow, we were 2nd to last again (that’s where we finished both days at WW). I can only conclude that leaving late, being a few minute late to leave stops, and not wanting to die=turtle finish, because that’s all I seem to manage despite it seeming like we were flying where appropriate. Not to suggest I don’t like being a turtle, but I do feel like it’s a looong time to be out there. We’ll get out vet cards back but I figure it took us at least 9 hours.

Anyhoo, by management mile 40, I was properly tired, as you can see by lack of photos. He vetted through still in the 40s CRIs,  one B on gut sounds but otherwise As. He was enthusiastically scarfing mash and hay the whole time I sat there contemplating things. Like bed.   Finally, our 30 minute hold was up and we headed out for the final miles back to camp.

We swung along at exactly the same extremely enthusiastic power trot he’d had that morning, or so it felt. I was really tired of the management side of riding him but I was pretty sure that i was finishing on a very strong and good to go horse which is a nice feeling, especially on a friend’s horse that hasn’t done a 50 in a few years.

Then, a mile from the finish, as we power trotted uphill and around a bend–there was a rider on foot, barely moving. Sparky went from 12 mph uphill drive to 0 in an instant, and his grandly high set giraffe neck went directly up and into my face. Hard.  I remember swearing, crying, and and swearing some more as Sparky slammed on the brakes a half mile from the finish at the photographer sitting silently on the ground.@#($&!!!!!!!!!!!!  My memory of the finish is barely seeing straight to get a time card, stumbling back to my trailer, then eventually standing there in a daze holding my cards and horse lead rope but unsure I could actually jog without passing out. Fortunately Diane and John Stevens swooped him up and vetted him out for me, THANK YOU GUYS. Spark vetted out great with good grades, I do think he earned a B on impulsion but god help us, I know he left his A game on the trail, and my face.

He ate, I napped a bit with a bag of ice on my face. Then, after feeling better post vomiting, and  contemplating the daylight left I couldn’t take it how close I was to home and asked a friend to back my rig out as my bell was still properly rung, loaded up a willing Sparky, and made it home just after dark. 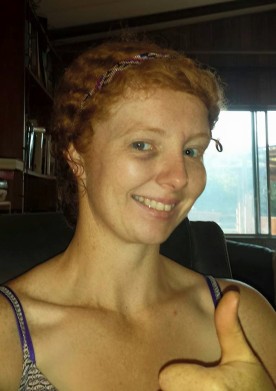 So, we got it done. He looks great this morning and is clearly an endurance beast. I’m…tired.